Outgoing Cardiff City chairman Sam Hammam has claimed that part of his legacy will be how he tackled the club’s hooligan problem head-on. He told BBC Wales that his “you’ve got to meet them to beat them” approach had led to self-policing among fans. 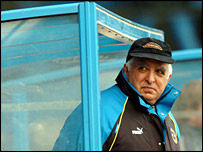 Nonsense. Cardiff City fans are about as capable of policing themselves as Fred West, Harold Shipman and Gary Glitter.

On Saturday, an hour after the game against Derby, I watched a fan walking home carrying a golf club above his head, swinging it in the direction of someone on the other side of the road and threatening them with racist abuse.

If this is “self-policing” I’d hate to see what things looked like before.