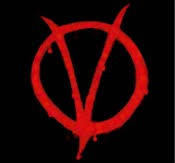 This, I believe, is the thought process that went into V for Vendetta, the first film to come from the Wachowski brothers since the Matrix trilogy, a series of films I like in principle, even though the latter two are pretty daft.

Clearly, the NHS cost-cutting measures have made it as far as Joel Silver's production company, where they had to lift bits of the script from the Matrix and sprinkle them over V for Vendetta. They also used the same approach when it came to casting. Who needs a casting director when you can just use that one-trick-pony Hugo Weaving again, and drag Natalie Portman in simply because she's fit?

I'm being unfair on Hugo Weaving, who I like in the seven films I've now seen him in (Matrix I, II, III, LOTR I, II, III, V4V), but if it wasn't for the mask, he couldn't have done the role, because everyone knows him as Agent Smith. He only got away with Lord of the Rings because of the pony-tail.

Natalie Portman too, is okay in the film, but despite the head-shaving trauma, doesn't really connect with the viewer. I don't know what it is about her, but she doesn't quite have the charisma to carry off the role.

Maybe the charisma-failure is the fault of first-time director James McTeigue, who spectacularly fails to transfer any of the stylistic goodness from the Matrix trilogy which loom large over this film. The corridors of the British Television Network don't have any of the 1984-style fascist beige that you would expect from this sort of dystopic film, and the streets of 'London' have the realism of a Disney film.

Which brings me to those very London streets. The most ridiculous part of this film is the fault of the good old Metropolitan Police. Because they just can't decide what is their weapon of choice. Will it be small swords and knives, or AK-47s? The film begins with the swords, making you think it's set in Guy Fawkes' time, but then you realise it's not at all. And this is endemic of the lack of style when it comes to action sequences. There's no good reason for any of the fight-scenes, and the camerawork isn't good enough to follow the action sufficiently. There's none of the grace associated with the Matrix films, especially compared with the Chateau scene in Reloaded.

So there's three things this film lacks:
– a raison d'etre – blowing up the Houses of Parliament isn't a sufficient plot device to carry this film to its conclusion
– an ideology – the film's anti-fascism and pro-freedom, but then blatantly condones terrorism
– style – any iconography in the film is anything-but-subtle, and there's a distressing lack of a car chase

I don't know what project the Wachowski brothers are to put their elusive minds to next, but I'll give them this advice: quit putting philosophy in films which aren't solid enough to sustain it.