Fixing politics, and journalism at the same time

In the leafy autumn of 2004, Boris Johnson found himself at the eye of a storm. The Conservative Vice-Chairman was sacked for lying about his personal life. Now in recent years it has not been an unusual story for politicians to be caught with their trousers down. But Johnson had a safety net in the form of the profession that had brought him down. As Editor of the Spectator magazine, he was both victim and potential attacker.

Mr Johnson is, thankfully, a special case in British politics. But the relationship between predator and prey is a timelessly complex one, often involving a little subterfuge, deception, and a politics all of its own. The press spit scorn at those who are supposed to run the country, and the politicians fight back with a flurry of spin and bluster. And while sometimes fun for those involved, many argue it has turned off people who aren’t in on the joke.

The 2004 Phillis Report was supposed to provide cures to politics’ ills. It recommended the end of the closed lobby system and drew a line under the years of ‘spin’. But three years after its publication, the report seems to have had little effect. Its critics say it underestimated the usefulness of the system’s faults.

The former Political Editor of the Evening Standard, Charles Reiss, contributed to the report. But he believes the existing system served the purposes of both politicians and journalists, and so was unlikely to change.

“Off-the-record information is a part of journalism in every country you care to name. It’s certainly true in America. Although [American journalism] is praised in some respects, you will often find sensitive stories attributed to a ‘senior Administration official’.”

Reiss agrees with the report’s findings: that ‘nasty’ politics has brought about atrocious levels of public trust in both politics and the media. Research for the report suggests that Members of Parliament are trusted by just 19% of the public, while Journalists are trusted by 13%.

But he disagrees with its recommendations. While Phillis proposed changes to systems – such as the closed lobby – Reiss thinks a change in culture is the only way to improve things. The Andrew Neil school of “why is this bastard lying to me” journalism isn’t sufficient for painting a true picture of government, he says.

When it was released, others rounded on the report’s proposals. David Miller of the Campaign for Press and Broadcasting Freedom said it “sounded the death knell for government information as a public service”. He said the report was full of praise for “PR-speak”, ripped page-for-page from the corporate world.

The former BBC correspondent Nicholas Jones said it “presented a lifeline” to the beleaguered Prime Minister and put upon him no real pressure to treat the media fairly. 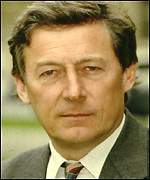 There have been changes. Even the online political rebel, Guido Fawkes, can now attend the briefings given by the Prime Minister’s Official Spokesman. And Tony Blair himself gives a televised briefing once a month, laying himself open to Westminster’s finest.

And yet the levels of trust in the process have remained low. According to MORI, who monitor trust in public institutions on an annual basis, politicians are trusted by the same number of people now as during the darkest days of Tony Blair’s government. Journalists’ ratings have also stayed the same.

The amount of trust in British politics is almost identical to that in every other major country. But the 2005 Harris Interactive poll showed journalists were much less respected here than they are elsewhere. In Spain and France, three in five people trust reporters. In Germany, the figure is two in five. In Britain however, it is just one in five. So perhaps the breakdown of trust is the result of bad journalism?

“Journalists are driven by deadline dynamics, by getting things out on time. If you’re turning out a fast-paced, attractive newspaper, there’s going to be hyperbole and exaggeration, and I’m afraid people are quite properly going to say ‘this is very amusing, but I don’t believe a word of it’.”

Charles Reiss admits that journalists work on a “razor’s edge”. Stories have to be taken as far as they can legitimately go without crossing the line and entering into speculation and guesswork. Clearly it doesn’t always work and mistakes are made. But it seems the razor isn’t sharp enough to tempt journalists back from the edge.

So while Phillis has – with limited success – addressed how politicians can earn the public’s trust again, a similar investigation may be required in order to foster better reporting by political journalists.

Perhaps the uniquely-qualified Boris Johnson should chair it.