What will Michael Grade’s departure from the BBC mean to Auntie? Well, I don’t think she’ll have been crying into her cornflakes when she read the Daily Telegraph this morning. 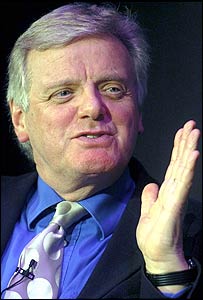 Certainly, Grade has steadied the ship through two very turbulent years, and nearly negotiated a licence fee for the next five years, but as Chairman his role wasn’t crucial to the BBC’s future direction. It seems he was lukewarm about becoming Chair of the BBC Trust (which takes over from its Board of Governors on January 1st). In fact, he was a slightly odd choice for Chairman in the first place, as he’s a producer at heart and will have missed not getting his hands dirty.

His new job at ITV allows him to do that, and comes with a hefty payrise too. It’s a massive boon for the ailing broadcaster as he’ll effectively be Chairman and CEO for the next two years, before appointing someone to take over as Chief Executive. It might be a more worrying appointment for BSkyB who since last week own 17.9% of ITV. He doesn’t like them, they don’t like him, and he won’t take any interference from them if he doesn’t like it.

But for the BBC, Grade himself accurately described the effect his leaving will have:

The BBC’s bigger than one person. People leave the BBC and a hole opens up. It’s amazing how quickly that hole fills up. Yes there’ll be a few days where they sort themselves out. But I can guarantee you by Monday it will be: ‘Michael who?’

And who will fill it?

David Attenborough probably won’t be interested now. David Dimbleby probably didn’t get the job last time for reasons which will still be the case now. Which leaves Richard Lambert, Baroness Jay and anyone else from the ether. After last night’s scoop, I can only really predict one thing: expect the unexpected.