It’s that time of year when A-Level Politics students sit down and are faced with the question:

1. Describe the internal democratic processes of the Labour Party. (30)

I have no idea what their answer should be. The question should really ask:

1. Describe the internal democratic processes of the Labour Party
a) in theory (15)
b) in practice (15)

Gordon Brown and Jack Straw tried to explain how the Labour Party had had its say. In reality, the coronation of Gordon Brown is identical to the way in which the 1922 Committee used to elect the leader of the Conservative Party, before they realised democracy was healthy.

Within Labour, policy had long been ceded by the party conference to the party leader(s), but that was taken on the chin because at least the party members got to decide who those leaders were.

But the party’s MPs closed ranks around one candidate who offers little difference from the last one. Technically, the trade unions and constituency parties can still nominate someone to be leader. Only their choice is either a) Gordon Brown, or b) Gordon Brown. 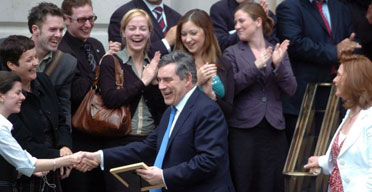 As well as defending the election farce, Gordon Brown also veered straight towards the Rumsfeldesque at times. He repeatedly spoke about how the electorate would be able to have their say in “the next period…erm…of time”. Has he just stepped off a Tardis? I could forgive him saying this nonsensical thing once, but over and over? Oh dear.

Nearly 90% of Labour MPs nominated Gordon Brown for leader. Of the other 10%, about half abstained and half voted for John McDonnell. Gordon Brown thinks those numbers are representative of the party he leads. He thinks he’s the “Unity” candidate. He’s probably wrong, and the blogosphere at least seems to indicate disaffection may be high.

Mr Brown could have stopped this. He could have told more MPs to vote for McDonnell if he really wanted a contest. In fact, he could have just not tried instead of putting a determined three-line whip on MPs who were supposed to be loyal.

He’s shot himself in the foot. Labour Party membership is already very low. How many will leave the party now, knowing that the only vote they’re going to get is in the vanity contest for the non-job of Deputy Leader?