If David Bellamy's an environmentalist, I'm a nuclear physicist

I know nothing about nuclear physics. Nor, it seems, does David Bellamy know anything about science. Because he’s still banging on about the “myth” of global warming.

Now that’s fine. He’s entitled to have alternative views. But every time he appears on television (as he has today) he is labelled an “Environmentalist”. I can see where the second bit of the word comes from, but not the “Environ” bit.

He’s popped up today to say how environmentally-unfriendly wind farms are. I’ll repeat that sentence just so you’re clear on where he stands.

He’s popped up today to say how environmentally-unfriendly wind farms are.

Writing in 2004 in the Daily Mail, who know a thing or two about dodgy science, he wrote:

Global warming – at least the modern nightmare version – is a myth. I am sure of it and so are a growing number of scientists.

The only science he quotes comes from the Oregon Institute of Science and Medicine, who Sourcewatch have written about. It seems they’re a bunch of serial nutters who lie about their credentials and are about as scientific as Lembit Opik.

George Monbiot had a bit of correspondence with Bellamy in 2004, and I agree wholeheartedly with what he had to say:

You claim that you are still an environmentalist, yet the harm you have done to environmentalism over the past few months is incalculable. May I respectfully suggest that you brush up on the science (and I mean all the science, not just a few selected studies of the kind you cite) and talk to some mainstream climatologists (not just the cranks whose work you champion) before writing any more on this topic?

More of the same, and Bellamy’s reply here

And may I take this opportunity to respectfully ask the BBC and others to stop putting Bellamy’s nonsensical diatribes on TV and find some credible opponents to wind-farms who can actually come up with an alternative idea.

I’m personally excited about the “offshore wind farms project” that’s been given the green light today. It’ll power up to 1,000,000 homes at a time. It’s only a small part of what’s needed, but at least we’re moving forward rather than watching our career slide into the abyss like David Bellamy.

Judge, Jury, and entertainment for all the family 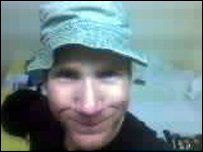 As the former head of the Flying Squad said today, “it looks like a soap opera”.

Police have arrested a 37-year-old in connection with the five murders in and around Ipswich. And that’s about all they’ve said.

But at the current rate, we’ll know whether he’s guilty and how long he’ll be banged up for by the end of the day. The 24-hour news channels have jumped on this one line of news and given us a torrent of copy, video, audio, maps, helicopter shots, speculation, 3D graphics, screenshots from MySpace and worse.

And, in my opinion, they’ve done enough in 5 hours to prejudice a potential trial.

It took the BBC a few hours, but they found they had interviewed the arrested man for background material. Sure enough, this not-for-broadcast interview was on BBC News 24 by midday, despite assurances given to him that it would not be used. Must be guilty then, if we’re taking his rights away from him already.

The cameras have been given us multi-angle options of his house like we’re in an interactive DVD. Oh yes, there’s another picture of his roof. Very informative.

Not only is our world-renowned broadcaster damaging the chances of a fair trial, they’re also ignoring every other news story in the process. The competition between News 24 and Sky News has become so ridiculous that they dare not move away from the story in case they are a nano-second behind the other.

It’s making a mockery of ‘news’ and I hope every journalist involved in it feels ashamed by the decisions being made by their editors.