All entries for Wednesday 14 December 2005 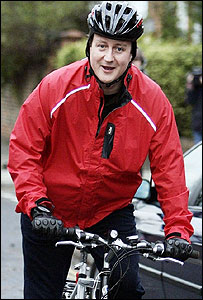 It's taken me a while to get round to welcoming David Cameron to the leadership of the Conservative Party. It's taken me this long because – honestly – I had him down as the new William Hague – ahead of his time, bound to fail.

Well now I'm starting to worry I was wrong.

Cameron's just made a speech in the City of London, which doesn't seem to have been very widely reported. He was, after all, talking about economics, and who gives a toss about that? Sky News seemed to be the only people covering it, and it's not even appeared on BBC News Online.

This is despite the possibility that it contained the birth of one of Cameron's best policies so far. It can be summised as this: "Independent setting of interest rates. Great, but not very sexy. So how about changing the role of the Treasury so it can't fiddle the figures as Gordon's done so well. Much better."

Sounds like small fry, aimed only at pleasing the city financiers. But I think it's much more than that. Cameron wants to keep the Bank independent, but let an independent body make sure that the Chancellor keeps to his own economic policy. (As when Gordon Brown realised he couldn't meet his economic cycle, so moved it). Cameron would also make the statistics office independent, meaning no more 'burying bad news'. Statistics would come out when they're ready, regardless of what it means for the government.

The latter idea is well overdue. The former one is more interesting – and let's hope that this 'independent body' will have the teeth to make sure the Treasury keep to their self-imposed rules.

It's all about de-politicising the economy, and seems to be a more genuine attempt to do so than when Labour came into power in 1997. While they gave interest-rate setting powers to the Bank of England, they kept enough controls so that it wouldn't really matter. When it came to spending, they could do what they pleased. And that's exactly what they've done. To take one example – the debt owed because of PFI Hospitals doesn't appear in the Treasury's balance sheets. Neither does the cost of owning and running Network Rail, or the civil service's pension obligations. Making things seem a bit rosier. Even if it amounts to fibbing about the state of government spending.

What Cameron's said today is so blindingly pragmatic, that it makes me think we might at the least be seeing a different type of political leader. But in order to stop the accusations that he is Blair Mk.2, Cameron needs to let this pragmatism flow through all of his policies, keeping special interests out of policy, and the real public interest* well and truely in.

If he does that over the next 3–4 years, maybe we'll at last be able to believe that a Conservative leader will do what he says when he gets to Number 10.

*Selection by ability in schools not being an example of this.