All entries for Friday 09 September 2005

Didn't see this mentioned on the blogs:

Warwick in Asia discussed in the Independent. Raised a few issues I hadn't realised about the project, notably who would want to teach or study there.

It also seems the University is set to approve the plan with no clear commitment from the Singapore government about how much money they will receive.

Also, another key point. I see that 'concerns over human rights and academic freedom must be addressed' has been replaced as a cause of concern with:

Isn't this a bit of an about-turn on the part of those looking into the feasibility of the project?

What are they thinking (2)?

So last week I unveiled the delightful, new, pink buses.

Today I think I can confirm they're staying.

Having just bought my bus pass (and WOAH they've gone up in price!), I got a leaflet telling me how much I'd like to be deafened by the 'Party Bus' as Rachel calls it, with its FM Radio fixed on either Mercia or Radio 2 (gawd help us).

They seem to think they should be proud of the fact that "Everything's pink!", which is apparently a result of "Acting on your comments from last year".

Well which fools asked for a radio!? Because the speakers are only upstairs, meaning that the driver has them on full blast so he/she can hear the dulcet tones of Terry Wogan.

Impossible to get a minute's peace on the bus now, and a nightmare for anyone wanting to cram for a seminar they should have read for.

And then there's prices. Three terms this year will set you back £205, two terms £150 and one term £80. Also, these prices include insurance, meaning that if you lose your card (no more than twice) it'll be replaced. Don't buy the insurance (three terms = £190 otherwise) and you'll have to pay for a whole new card from scratch.

So hope you've all got some money left over from the holidays!

P.S. SAY NO TO WOGAN (or any other loud music on the buses – what's the point of an MP3 player otherwise) 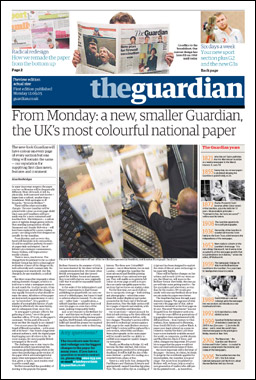 So the Guardian unveils a brand new look (and size) on Monday when it relaunches in 'Berliner' – a mix of broadsheet and tabloid.

I think it's a good idea. The Independent and The Times, since going compact, have too often had only one big story splashed on the frontpage. It worked well as a gimmick, but because it sells better than when they do several stories, got overused.

But the design seems a less successful than the size. The title of the paper is perhaps too low down the page, and looks a bit too much like The Independent's styling.

But on the plus size, colour on every page means that black and white photos will be a thing of the past (unless chosen by the photographer), and probably more expensive advertising (which, you never know in the world of the media today, MIGHT be used for more journalists).

We'll have to see on Monday how it ends up looking, but generally I think it should be a change for the better.