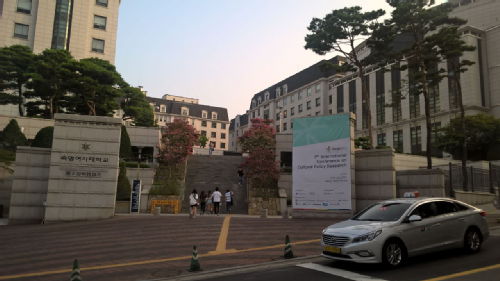 The 9th International Conference on Cultural Policy Research was held last week at Sookmyung Women’s University in Seoul, South Korea. I was there, along with several CCPS colleagues, PhD students and graduates for what was a very stimulating few days. Seoul, the first Asian venue for this conference, was a setting which was timely and appropriate. Korea has been the home, in recent years, to a vibrant re-imagining of state-led initiatives in culture in relation to city regeneration, cultural diplomacy and the cultural economy, culminating in the hugely regionally and globally successful Hallyu wave of music, film and TV. These achievements, now retrospectively re-branded into a strategic vision for Creative Korea, provided the backdrop to the event as researchers and policymakers gathered to learn from, reflect on and contextualise them in the longer history of the project of cultural policy.

Personally the week started on a rather sombre note, having escaped an especially damp UK summer, dampened a bit more by the deepening gloom of the post-Brexit political crisis and arriving in a Seoul that was being brushed by the edge tropical storm to welcome conference go-ers with a thorough drenching. This, and jet-lag, might have accounted for the rather downbeat tone in the opening session on the Changing Role of Cultural Policy in the 21st century – and certainly all the speakers in various ways identified the Brexit vote as reflecting a significant change to the global context in which research in the field could operate. For me it was hard to get away from the sense that if, among the already proliferating interpretations of the meaning of the result, Brexit was a vote against a vision of a tolerant, outward looking UK, then British cultural policy itself, and its attendant research community, had also somehow failed. The catharsis of discussion, though, and the reminder that other places in the world (including the Mexico of Gonzalo Enrique-Soltero’s contribution) faced challenges in the social and cultural landscape which were even more immediate than those in the UK, helped me to re-focus on the on-going contributions that research in this field should still aspire to make. This re-awakening was helped by an opening ceremony in which performances of traditional Korean dance and music were accompanied by some slick video introductions to Seoul and to Korea and by some words of introduction from eminent local dignitaries and the organising committee. I’m often struck by how international conferences are so much better at this kind of thing than we are in Britain and, while the cynic in me might reflect that there’s nothing academics like better than being told how important we are, the warmth and sincerity of these greetings made for a very welcome start to the week’s activities.

The rest of the programme was packed with papers and themes. Amongst many potential highlights I’ll pick out three memories from the sessions I saw. First were from the sessions and papers which were addressing the theme of cultural work. Some years ago an influential paper asked where work was in creative industries policy. On the evidence of these sessions (including about ‘Inequality, Meritocracy and Wellbeing in the Cultural Industries’ and ‘Artistic Survival and Public Policy’), it is still being looked for and found in diverse places as researchers attempt to identify and to explore the realities or delusions of work in the creative sector. I’m writing a new module on this topic, and the papers and discussions I saw here will be of great use in shaping these issues on behalf of our students. Second I was really struck by a paper from Takashi Ishigaki on the use of film-showings as a mechanism for re-building community bonds in Tsumani-struck Japan. The author had worked as a volunteer on the program and displayed images of films screened on the side of buildings in village squares or in community centres, for children and adults, all provided free by local distributors. It offered a nice reminder of the important work that apparently simple forms of cultural participation can do in re-establishing ‘normal life’ in a traumatised region.

Finally the closing plenary, featuring an address on 'Cultural Strategies of Urban Regeneration in the Instagram Age' from Sharon Zukin, author of the influential Loft Living, with a discussion from an associated panel, was genuinely memorable. This was not least a result of its location in the spectacular setting of Seoul’s Dongdaemun Design Plaza, itself perhaps exemplifying the kind of ‘McGuggenisation’ that the panel and others introduced and critiqued. Alongside the celebration of the potential of the nomination of cities as ‘creative’ Professor Zukin also reminded us of the ambiguities and tensions in this process. For all the celebration of such initiatives, they might also be complicit in the re-shaping of the city as a façade for the aesthetic delight of the elites of global finance, or for extracting value from tourists rather than the cultural enrichment of its citizenships – a point made forcefully by a local discussant, Professor Dong-Yeun Lee of the Korea National University of Arts. It was a telling discussion that highlighted the inherent tensions between visions of culture (and the city) for policymakers as, on the one hand a thing to be produced and consumed and, on the other, a space to be lived in and shared.

It was especially nice to experience all this with colleagues from the UK cultural policy research community, as well as several of our PhD students – some of whom were presenting and responding to papers themselves, and some of whom, as Seoul natives, were able to act as valuable restaurant guides too. That, and the return of the sun by the end of the week, made for an inspiring and energising conference. My sincere congratulations and thanks to the organisers for their hard work in putting it together.

ICCPR 2016 in Seoul on Culture Matters">Tweet