Today’s news that Facebook has begun the process of developing a ‘dislike’ button resonates with some of the issues I reflect on in my new book on Understanding Cultural Taste. The book is an exploration of the relations between taste and social and cultural life and it includes a chapter on Digitalizing Taste, in which I speculate on the particular significance of taste to online cultures, including those of social networks such as Facebook. ‘Liking’ and ‘disliking’ has become something of a taken-for-granted dimension of social networks, for both users and the networks themselves. They are central to the very creation of a profile – in which identifying and sharing the music, films, books or TV that we like, as much as our occupation, our education, or our relationship status, is tacitly understood as a kind of performance of the type of person we are or, perhaps, the type of person we would like to appear to be. The display of such tastes – and indeed the possibility of judgment of the tastes of others amongst our ‘friends’- becomes part of the pleasure of contemporary cultural consumption as we identify and connect with common communities of interest, or distance ourselves from others. There are also the pleasures of gaining likes for photos we’ve taken, or for links to interesting stories or videos which we’ve ‘shared’, or for more general bon mots, to get instantly reassuring and re-inforcing feedback from our networks that we are appropriately cool, witty, radical or affected by and engaged in current events. Equally there are the significant feelings of disquiet and insecurity when expected likes do not materialise. Such anxieties perhaps reflect the success of social networks in constructing themselves as microcosms of social life more generally.

What might be more uniquely contemporary is that, for the networks themselves, our ‘likes’ are not just descriptions of our characteristics and interests but are crucial to their business models. The spread of the ‘like button’ across the web (there’s one in the corner of this page. Please click it!) indicates the extent to which liking has become part of its very infrastructure. The lists of things we like and the clicks on pages and posts with which we interact through liking are not just positive feedback or commentary – they are also data which feed into the complex construction of individual and collective users as products to be sold on to advertisers. They also feed into the algorithmic construction of news feeds and searches, in which data about the kinds of things we have ‘liked’ in the past is used to probabilistically predict the kinds of things we might be interested in in the future.

It is this latter aspect – crucial to what Gerlitz and Helmond describe as ‘the like economy’ – which has been at the heart of the controversy over whether Facebook should have a dislike button at all. Facebook’s historical reluctance to include such a button, they argue, reveals the crudity of ‘liking’ as a tool to express the range of sentiments (agreement, enthusiasm, even sarcasm) which users might wish to share in social networks. It also reflects the construction of such networks as spaces where the default setting, as it were, is to ‘like, enjoy or recommend as opposed to discuss or critique’ (Gerlitz and Helmond, 2013: 1358). Dislikes are as important to the performance of taste in relation to identity, we might speculate, but harder to monetize.

It is interesting to hear the parameters which Mark Zuckerberg has placed around the proposed dislike button this morning – that the aim is to allow for the expression of empathy or solidarity even when ‘every moment isn’t good’. These seem laudable enough ambitions – but raise interesting questions about the ways in which data that will inevitably be gathered about dislikes can and should be put to use. What does Facebook get out of the effort to develop this innovation? As interesting for me is the extent to which this move fits with the ambition of organisations like Facebook to shape and alter social norms in the digital or machine age. As I suggest in my book, Facebook doesn’t really know what we like. Liking is a complex process involving, amongst other things, sensory, aesthetic and moral forms of judgment that emerge from a range of life experiences. Facebook knows what we click on. Its ambition might be to encourage or train its users such that the latter more frequently equates with the former but – thankfully in my view- it has a long way to go to achieve that. 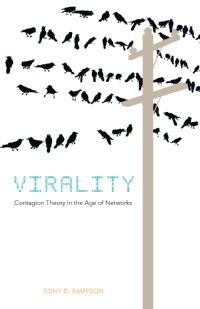 The GMC course welcomed visiting researcher – Dr Tony D. Sampson, Reader in Digital Culture at the University of East London, co-editor with Jussi Parikka of The Spam Book: On Viruses, Porn and Other Anomalies from the Dark Side of Digital Culture (2009) and author of a new book Virality: Contagion Theory in the Age of Networks (2012). Our postgraduates got to grips with some new and challenging critical thinking around neuro-culture, attentional marketing, global protest and crowds, contagion on and offline, ‘pass on power’ and the vulnerabilities built into robust networks. Sampson was adept at drawing together a wide and inter-disciplinary range of theories and methodological thinking to create a new framework for tackling the ways in which the social is made and assembled in our increasingly attention-capturing economies. From Tarde, Bergson and Baran to Deleuze, Foucault and Stiegler, Sampson took us on a journey through difficult terrain to show us how propositions such as ‘nudge’ theory, geographies of mood, meme marketing and happenstance viralities emerge and gain ground both in terms of business strategies and political discourse. Our postgraduates come from 19 different countries and bring with them a wealth of experience of working and living in communications and media landscapes, ecologies and environments that are increasingly connected to each other. Sampson was able to explore succinctly the centralised, decentralised and distributed networks of communication (Baran) that afford (or not) connectivity, allowing us to reflect upon our local experiences.

Fundamentally, Sampson asked us to understand the social as never given but always being made and this allowed us to reflect upon our roles, agency and activities in that making of the social. At the same time, Sampson highlighted the different ways in which hierarchies of networks are produced: super clusters and super nodes of attention that produce aristocratic networks that may look more like a decentralized network than the distributed vision that cyberculture theory may have promised us in the 1990s. Oprah Winfrey was a good example of a super node! The GMC postgraduates come from a variety of different experiences of communications histories and practices that do not always follow these patterns of development, so it will be interesting to see what they find applicable in their own local contexts.

Sampson’s presentation of his new thinking allowed us the time to unpack his ideas on virality and digital contagion which was useful for engaging in the areas we are studying: spreadability of media, the politics of fear and anxiety around online culture, the attention economies many of our students have been, are, or will be employed within, and our own desire to tackle inequalities through new communication paradigms. Our students were interested in Sampson’s take on web analytics, how the arts and sciences can work together on these issues, and whether we should continue to fight for a distributed network. There were lots of references to Nigel Thrift’s work in the session and the students learned a good deal about the relationship between media, emotion, affect and the biological. We all went away wondering whether we were sleep-walking our way through the spreadability of media content or whether we were awake and alert to what Sampson defined as the ‘mechanisms of capture.’ For more on Dr Tony D. Sampson’s work then visit his blog. The new term started for students on our GMC course with a talk from a visiting researcher - Dr. William Merrin, Senior Lecturer in the Department of Politics and Cultural Studies at the University of Swansea. William’s talk on Media Studies 2.0 threw our newly arrived students into the deep end of debates they will be wrestling with over the coming weeks and months – about the profound social, political and cultural issues underpinning the ever-changing media and technological landscape and, as interestingly, about the role of Media Studies as an academic discipline which doesn’t just reflect on these issues, but has been, throughout its history, active – and even complicit- in shaping them.

William’s whizz through the history of the development of media technologies emphasised that the contemporary mediaworld had been shaped by the coalescing of two different stories of innovation – one focussed around technologies of broadcasting and one around computing. These developments were not just a consequence of brilliant inventors providing technological solutions to practical problems – they were also bound up with cultural processes and assumptions about the best ways to communicate and the best ways to manage information in complex societies. It is the convergence of these stories in the late 20th/early 21st century which marks the distinctiveness of this period, as the computing side of the story squeezes out the broadcasting side. Whilst TV, radio, film and print– the dominant media in Media Studies 1.0 might look and sound like they did before – to audiences (or users as William suggests they might better be called) and to academics in this field - they are now, almost exclusively, produced and circulated through digital code.

This accelerated convergence has a number of paradoxes within it. On the one hand it appears to bring enormous opportunities for more access to the technologies of media production, which escape the traditional relationships between communication, order and power (William showed us a YouTube video made by his 10 year old son, explicitly against his parental wishes). These are means of mental and symbolic production not available to the audiences of recent history. On the other hand, the audience of the past could be anonymous if it wished. The users of the present, by contrast, leave their digital traces for commercial and state interests to feed on –so that even in benign liberal democracies like the UK our Facebook likes become a commercial resource over which we or indeed our elected representatives have limited control and your Twitter feed might land you in jail.

The professional expertise of scholars in Media Studies has been bound up with texts, representation and audiences. In Media Studies 2.0 these might not be where the urgency of debates are, in comparison to knowledge about regulatory frameworks or access to the means to understand and re-work code (to hack, in other words). For those in the arts and humanities more generally, interested in the consequences of the digital, these are important challenges, which raise questions about our focus and priorities and about the kinds of skills students – and indeed teachers – might need to live and work in this emerging media infrastructure in ways which might help shape it for the future.

It was a provocative presentation, and William was good enough to share chapters from his forthcoming book with us. He also shows an enviable commitment to how Media Studies 2.0 might challenge traditional models of gatekeeping and authorial academic authority by blogging them here.

For us in CCPS this year also represents Global Media and Communication 2.0. Our founding director Jonathan Vickery is concentrating on developing a new MA program on Arts, Enterprise and Development and Joanne Garde-Hansen has taken over as our Course Director this year. I’ll record my thanks to Jonathan for his work in setting up and managing the programme for the last two years and look forward to working with Jo. I hope that, on GMC this year, as teachers and students, we can try and rise to William’s challenge.