All entries for November 2014 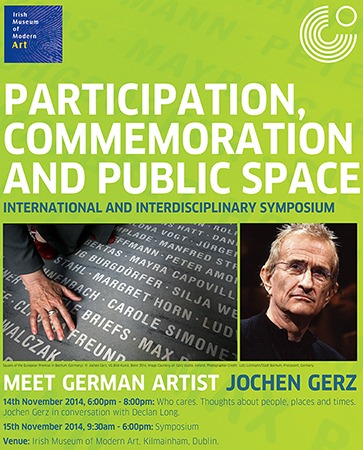 Last weekend I was speaking at this symposium in Dublin, organised by the Goethe Institut at the Irish Museum of Modern Art. All the speakers were invited, being those whom in the last twenty years have published major pieces of research on Gerz’s work: Söke Dinkla, Marion Hohlfeldt, Guido Meincke, Renate Petzinger, Philippe Mesnard, and myself. It also featured those central to Dublin’s cultural scene, Declan McGonagle, Jenny Haughton, Pat Cooke, Lisa Moran, and Ray Yeates, among others. Jochen himself gave the opening address the night before, to a small but packed audience including the German ambassador. My paper was called ‘Countermonument and the materiality of memory: Jochen Gerz and Coventry’s Future Monument and Public Bench’. I was asked to concentrate on Coventry given my involvement with Jochen during his four years working on the city regeneration, branded by the city as the ‘Phoenix Initiative’.

Jochen Gerz’s now famous concept of ‘Public Authorship’ was engineered in Coventry around the millennium year 2000 – which we all remember as the year of the huge wave of public commissions by the UK government as part of the Millennium celebrations. The central component of the regeneration was a new ‘Place’, or plaza, which was to act as the missing public gathering place for the city. The masterplan was actually well-thought out by a prestigious and well-meaning design team, intent on creating new space for ‘the public’. The entire area was structured as a metaphorical journey (the physical trajectory being an actual pedestrian route) through Coventry’s historic centre, animated by the theme of reconciliation between the past, its industry and national self-assertion, and the present and its aspirations for renewed productivity and for international peace. Physically this would run from the old bombed-out cathedral from World War Two and earlier archaeological ruins, through a new boulevard into the new plaza (onto which a new frontage of the famous transportation museum opened), around a new spiral ramp and up to a parkland area: The Garden of International Friendship. This would, ostensibly, provide an ethically charged journey from past to future – and a prelude to the re-branding and marketing of Coventry city centre as a place for public culture. The reality, of course, is that (particularly after September 11th 2001) the idea of a Garden of International Friendship was not so compelling, and today the area seems odd and somehow has not fulfilled its purpose.

The Future Monument is a 4.6m high obelisk made of a glass compound – around which, to the north, are names of associations or groups of citizens; on the south side are plaques engraved with the names of former enemies who are now, or will be, friends. The surface of The Monument appears shattered (is shattered glass sealed with a thick compound surface – a premiditated response to expected vandalism), and is lit up internally at night. Its apearance has been inflected by plantlife growing within it – quite hilarious, but something that has inadvertendly maintained its interest. The Public Bench features over 2000 plaques bearing the names of Coventry residents, and the names of anyone, anywhere in the world who remain significant in the memory of a Coventry resident. The Bench runs along the north rim of the square, made of concrete and wood, 45m long. Physically the two works are close but not contiguous.

‘Public Authorship’ as a title for a project – was open-ended and indeterminate in meaning; Jochen’s emphasis was on dialogue and city-wide deliberation on the meaning of ‘public’ and the role of monuments in the city (the being a countermonument, or what he called ‘antimonument’, project). The ‘Public’ in Public Authorship’ was not synonymous with the social…. It was not a form of art populism: It demanded participation, through writing, literacy, cooperation, and individual acts of self-representation. What does it mean for the public to ‘author’ – in the city? And what did it mean, to ‘author’ a monument? However, the genius of the term was that it seemed quite transparent, direct and beckoned a lot of public and media attention as it first appeared in various opening events and meetings in Coventry. When Jochen arrived in Coventry in 1999 there was no site for an art work, and he had no detailed plans, only two line-drawings and two questions -- ‘Who are the enemies of the past?’ And, ‘Who are your modern friends?’ The questions he asked the Coventry ‘public’ for three years before inscribing names of some of his interlocutors on plaques. The dialogue over that time hit at the heart of issues to do with the socio-political conditions of Europe, nationalism, multiculturalism – and during and after September 11 all talk of ‘our enemies’ was regarded by some city councillors are inflammatory. Yet it continued and Jochen successfully engaged with (and uncovered) a lot of the complexity of Coventry’s population, to some degree deflating the myth of a ‘general’ public. Go see it. 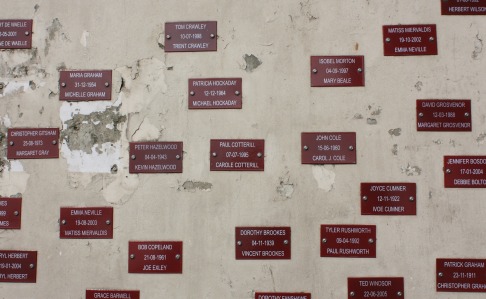 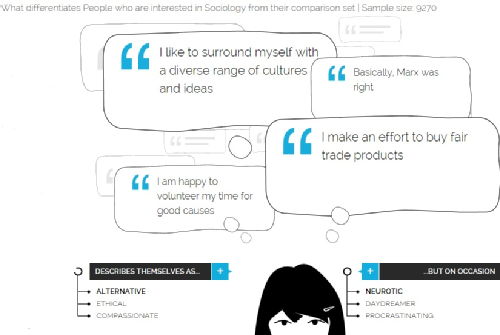 I’ve wasted a bit too much time this week playing with the newly released You Gov profiler app. This is a powerful market research tool which provides its subscribers with detailed demographic information about existing and potential audiences for products and brands, drawing upon data provided by its panellists. It has generated considerable attention and comment in press and social media, with stories emerging about the tastes and inclinations of fans of Cliff Richard and Dr. Who, reflections on what tastes for Japanese manga may say about your preferences for pets and some surprising revelations about the fans of certain football clubs. Some of this comment has been, perhaps in the interests of a good story, strategically blind to the detail (the second of YouGov’s FAQ’s on the tool specifically explains why its information does not give a picture of typical consumers of the various brands, products or artists it asks about). This volume of media commentary, though, also reveals an on-going fascination with tastes, and the persistent assumption that they provide a route to know people in deep – and in this instance commercially exploitable - ways. This resonated with some issues I’m reflecting on in my current writing project on ‘dimensions’ of cultural taste.

Part of the fascination with tastes, for me, comes from a broader tension in consumer-oriented societies. One of the abiding myths we live with in that kind of society is that consumerism entails liberation from the social constraints of an imagined pre-consumerist past. Consumers are ‘free’ - although the quality of that freedom is contested - from being placed into the ‘boxes’ of social identity, and are instead encouraged to craft themselves as individuals through their consuming practices. This creates an assumption that what we like can define or express the kind of person we are. Much of the social media reaction to the You Gov tool that I’ve seen has, in a similar tone to the response to last year’s Great British Class Survey, been concerned with critiquing the labels and categories in which people find themselves as part of a general disquiet with being placed in any kind of category (‘I read the Guardian but hate braised endive!’) and, by extension, to dismiss the value of trying to categorise at all. The energy of these kinds of response might reflect an awareness that tools like this reveal the uncomfortable truth that we are not, in reality, as liberated as we think and that our tastes are ‘map-able’ and patterned in ways which reveal that who we are (our social class, our gender, or age or ethnicity our educational experiences, our professional networks) still shapes what we like even though we might feel little emotional affinity with, or might even resent, the categories in which we are placed.

The tool also raises interesting questions about how we come to know about taste methodologically. Back in 2007 Mike Savage and Roger Burrows wrote a prescient article about ‘the coming crisis of empirical sociology’, arguing that the established technologies of social research (the survey, the interview) and the glacial mode of academic production were being usurped by commercial techniques and more nimble, creative forms of method, including those enabled by digital technology, which are increasingly influential in defining the social. This profiler perhaps exemplifies this shift. Its cost would trouble a funding council, but its scale and complexity (200,000 panellists providing responses to over 120,000 data points) has the potential to offer a rich resource for sociological analysis – as much as fodder for strategic brand development. It is certainly a mode of investigating and displaying the social which has echoes with the visualising of tastes evident in Bourdieu’s Distinction, but its findings are presented with a clarity and accessibility which might make it a perfect tool through which to teach that notoriously difficult book. The question of who gets to make this kind of tool and for what purpose, though, raises a slightly different question about what is gained and lost in our understanding of the relations between taste and social life in this kind of activity.

Knowing other people’s tastes and judging ourselves against them is part of a well-established social game and, in some areas – newspaper readership for example - tastes are a well-established synonym for types of people in social and political discourse. Talking about tastes, in this sense can be a relatively safe way of talking about difference in contexts in which explicit forms of prejudicial judgment have, for good reason, become frowned upon. Moreover talking about taste can be a basis for social interactions, and for the establishment of friendships or relationships. Placing people and things into categories is an act of power, but it also has its pleasures – as anyone who has spent time answering and sharing BuzzFeed quizzes about which Star Wars/Harry Potter/Breaking Bad character one is on Facebook will know. This kind of technology, which effectively categorizes on the basis of probabilistic statistical relationships between inputs is increasingly present in a number of aspects of daily life – and increasingly powerful too, given that the categories in which we are placed might have consequences – in relation to the self-assessment of our health or of our ‘personality type’ in the workplace. These everyday forms of categorising might be understood as a more general strategy of contemporary governance. The impulse and imperative to classify and the impulse to avoid classification are in clear tension in tools such as this and the debates they generate. Whilst debates about taste might be a benign expression of this tension, they also flag up the limits of these technologies in separating data from people, and tastes from the bodies doing the tasting.

Whilst there might well be an affinity between the kinds of patterns revealed by this tool and inclination to buy related products, goods or services one of the things I’m exploring in my book is whether this is the whole story of taste. I’d also argue that taste is a more complex phenomenon bound up with sensory and affective aspects of experiencing the world and of moral judgments of ourselves and others living together in it. These latter questions remain important to understanding the consequences of classification – but they remain difficult to capture through measures of ‘liking’, however sophisticated they may be.