All entries for August 2017 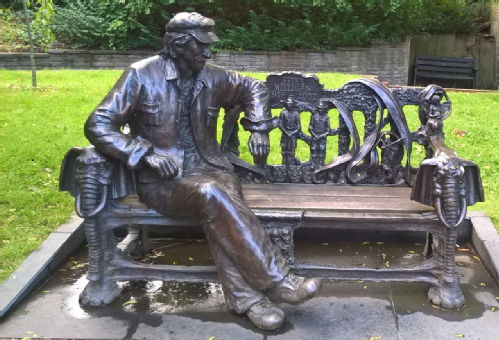 Last month I was lucky enough to receive a small grant from the Humanities Research Fund here at Warwick to develop a larger funding application for a project entitled ‘Monumentalising Popular Culture’. I made a start this week, by visiting Stephens Gardens in Finchley North London – to look at the statue of the late writer and comedian Spike Milligan. The statue, made by the artist John Somerville, was unveiled in 2014 by the Finchley Society of which Spike was the president.

The idea for the project emerged from a chapter from my book on Understanding Cultural Taste in which I discussed the role of cultural policy in making cultural hierarchies. We often think of distinctions between high and low, legitimate or popular culture as abstract things, perhaps especially in the contemporary period where hierarchies are almost always either viewed with suspicion or at least conceived as being in flux. Such a view belies the extent to which there are identifiable processes through which things are legitimatized by people in various positions of authority, making decisions. Examples might include the selection of items to study on educational curricula, or the selection and curation of items deemed suitable for public exhibition and display in museums. In the book, though, I became particularly intrigued by the idea of monuments to cultural figures as providing a material evidence for the kinds of culture that are valued. In this I was following the insights of Priscilla Parkhurst Clarke about the centrality of monuments to writers and their strategic positioning in symbolically significant places in the ‘making’ of France as a literary nation. Taking this idea as a starting point, my initial focus will be on statues of comedians. This is something of an arbitrary choice – but hopefully one that is also revealing.

It is certainly an interesting summer to start a project on statues. Events in Charlottesville, and other, earlier or less heralded controversies from the UK and beyond have served to put concerns about why some figures from the past are selected to be given these kinds of monument into sharp relief. They have also reminded me that, in an apparently ephemeral and fast-moving age, that material culture still matters. The media theorist Harold Innis recognized this in his distinction between space-binding and time-binding media forms. Space-binding forms might be fluid and easily transferable across huge distances – Innis imagines this in relation to broadcasting but we might also see digitally enabled networks as exemplifying such forms in the present day. Time-binding forms might have less of a geographical reach but they have a power to communicate across time in a more immediate, forceful way. These forms last across generations. Statues exemplify this in communicating both a kind of solid permanence but also in communicating a consecrated version of a past which can – as in the case of Robert E. Lee – become unstable and unsuitable for the present.

Such issues might be less pressing in the case of statues of comedians as they are in the case of civil war generals or the figures of our colonial history, but there are some similar questions about how what was valued in the recent past is selected to be given an apparently permanent place in the present. What does it mean for Spike Milligan (and the other, so far fourteen statues of comedians that I have identified in the UK) to be remembered in this way? And given that the significant majority of these statues have been unveiled since the turn of the century why commemorate these figures now? Answers to both questions seem to implicate these statues in a process of making certain types of popular culture ‘official’ in some way – bestowing on them a kind of legitimacy. At the same time it also seems to be a feature of such statues that they emerge from local campaigns amongst fans or enthusiasts –so they might also be decidedly ‘unofficial’ or at least an attempt to re-define what is worthy of this kind of treatment. I’m interested, in the project, to find out a bit more about how these kinds of decisions are made, to explore what is at stake in this kind of process, to examine how these kinds of statues are approved and sited, as well as how they are lived with, interpreted and valued by the people around them. I’ll keep the blog updated as I go along – and I’d be glad to hear of other statues of comedians or other figures from popular culture, in the UK or beyond either in the comments below, or e-mail in the meantime.