Culture and creative industries and not just organisations and networks of individuals who generate certain kinds of potentially influential or enjoyable products/services. They involve social processes and generate cultural change, transmit knowledge, devise new forms of agency, communication and productivity, and so on. And this is not necessarily a good thing: in cities, so-called gentrification can be facilitated by spillover effects. Anyway, this is the (expansive) subject of the small research group I am a part of – and on Monday I attended the final ‘preliminary evidence’ meeting of this group, call it the European Spillover Effects research group. The main funding partners of this preliminary stage are European Centre for Creative Economy (Ruhr region, Germany), Arts Council England, Arts Council Ireland, European Cultural Foundation and a few other sleeping partners (i.e. who were not there), and 19 people turned up to meet in this design studio space in Dortmund (ecce’s city). This was the final and important meeting, where we were presented with the final report (by Tom Fleming Cultural Consultancy, who did all the hard work), and then decided how this would form the basis of a large research project. Last week, in fact, the EU URBact project on ‘Creative Spillover’ delivered its final report in Birmingham. We will, I hope, do something different. 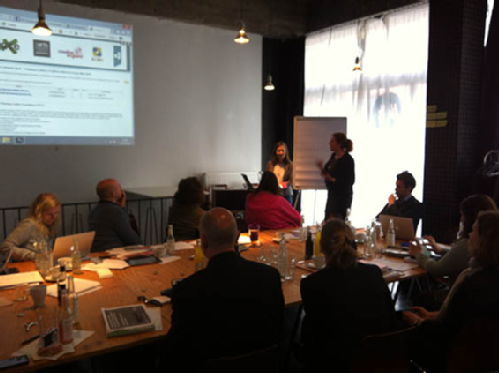 The concept of ‘spillover’ has a complicated history, involving a broad range of subjects from the geo-politics of industrial development in European integration to the impact of media on social behaviour, to the more recent ‘effects’ of creative and cultural industries policy and practice. A lot of recent interest in spillover has been from the ‘cities’ fraternity, and so an extension of the kinds of past urban policy interest in clustering, value chains, the externalities of innovation-based industries, and the regeneration impacts of new start-ups involving all of the above. One issue that emerged was that our preliminary studies – involving my paper published by ecce (below) – were broad and exploratory and needed now to become focussed, driven with a specific agenda. (i.e. now that the European Commission has articulated interest in spillover, a number of other major research groups are emerging in the field). One aspect that distinguishes us, owing partly to Richard Russell’s leadership (Arts Council England), is the ‘public’ dimension of spillover – how can we identify a value chain trajectory for public investment? How can we trace the dynamic function of investment through policies for creative and cultural industries to actors or agencies, places or markets, and then the big contexts of sustainable societies and economies? What is the ‘public’ dimension of the innovation industries or the start up businesses whose identity and social function we so often reduce to goods/services, employment, revenues and taxes. However, in discussing this the issue of ‘place’ became problematic (given how spillover can happen a long way from immediate sites of production or location).

For me, delimiting the project needs to be done in response to specific EU policy fields – not just the obvious DG Urban then Culture, but perhaps to Territorial integration & cohesion, Citizenship/integration (multiculturalism), and even Foreign Relations and the Development Aid field, given how these kinds of dynamics could be crucial to small economies around the world trying to develop. Second, personally, I am interested in how ‘public’ investment could create the kinds of spaces, movements and organisations whose impact collapses the antagonism between the seemingly necessary binaries of private/public, commercial/arts, goods/services, social/cultural. But we first need to work through the ‘evidence library’ that the project has generated, and Tom Fleming’s initial analysis, and consider if we have the huge aspirations (spare time, energy, naivety..) for an EU funding bid.

Selfie Citizenship: Visibility, control and the mediated self 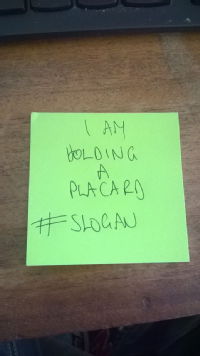 Our IATL-funded work on developing the Mediated Self Project module continues. Last Thursday this took me to Manchester to attend a workshop on the theme of Selfie Citizenship sponsored by Digital Innovation at MMU and the Visual Social Media Lab at Sheffield University. The event showcased the work being produced by a network of scholars, from a range of disciplinary backgrounds and interests, on the implications of the growth of the forms of visualisation and representation associated with ‘selfie’ cultures. Readily dismissed – like so many aspects of popular creative expression – as indicative of the frivolous fluff of contemporary life, selfie-culture emerged from the presentations and discussions here as a compelling and serious object for scholarly analysis. As well as paying attention to the explicit role of the selfie in expressions of dissent and resistance, the seminar also shed light on the selfie’s place in the broader power politics of digital and technological cultures.

For me there were two recurring themes from the day which can help us in framing our module on the mediated self. The first was the significance of the notion of visibility. Selfies can be interpreted, as Adi Kuntsman implied in discussing her research into the practices of serving Israeli soldiers, as declarations of witness to events, aimed at an audience beyond immediate locales and frontiers. Following Lauren Berlant, she suggested the social media circulation of selfies from actors at the heart of globally significant events can, for better or worse, reflect an affective announcement of a kind of immediate presence on this stage. This kind of visibility was evident in other presentations too. Crystal Abidin explored the ways in which a specific Singapore MP managed his visual image through regular selfies of his life away from his public role, drawing on the visual tropes and techniques of micro-celebrity learned from young Singapore women, rather than from the serious, patrician modes of visualisation that are more common in established Singaporean media political culture. In a context in which the stakes of public political critique remain high, this was a crafting of the political self as ‘just like us’, with all the potential ambiguities of that claim. Simon Faulkner explored the relations between selfie culture and the histories of visualisation evident in photo-journalism, using the examples of the blurring of the ‘professional’ and social media practices of a photographer working in Palestine. Here the ‘traditional’ role of the photograph as part of truth-telling witness is both ‘spreadable’ in ways which make connections with political struggles in other times and places, but also personalises these struggles in interesting ways.

The second, related theme was of control, and specifically about the hidden infrastructures through which our digital lives, including selfie-cultures - are managed and circulated. Farida Vis reflected on the hidden and proprietorial role of algorithms –specifically Facebook’s EdgeRank - in determining which images and items appear on, or disappear from, user newsfeeds. As such feeds – and their equivalents in other platforms - become more taken-for-granted and relied on as sources of information the control of the means of circulation becomes crucial. This makes what seem to be arcane technical changes to platforms potentially hugely significant in shaping our knowledge of the world. Sanjay Sharma’s research on ‘Black Twitter’ and the phenomenon of users and activists deliberately ‘gaming’ the system through deliberate and repeated sharing to inflate the prominence of trending hashtags reflecting African American issues in an ‘attention economy’ perhaps exemplifies this struggle for control. I’m pleased to say that Sanjay will be joining us and our student stakeholders for further discussion at our June workshop.

Jill Walker Rettberg’s presenation brought these themes of visibility and control together in drawing on and developing the insights from her book Seeing Ourselves through Technology, which is highly likely to find its way onto our reading list. It reminded us that the drive to represent and narrate the self has a long history. The particular technological conditions we find ourselves in allow both for the ready dispersion of the means to represent the self, but also the infrastructure to make those representations visible. They are shared with other people but also, through the rise of facial recognition software and the algorithmic sorting of data, visible to machines concerned with either commercial exploitation or surveillance of these selves. There is a dystopian aspect to this kind of narrative and some of Rettberg’s examples (of the life insurance company that offered discounts to fitbit users who met their targets, or the increasingly sophisticated modes of child monitoring that might normalise wearable surveillance technologies) certainly give pause for thought. As with the development of media technologies down the ages, though, paying attention to how people actually live with, negotiate and even subvert these technologies in their daily lives might temper overly pessimistic readings. As well as keeping an analytic and critical eye on the implications of these developments it seems as important to keep asking what it is about people’s lives which makes the forms of visibility and control afforded by these technologies valuable and attractive to them.

Thanks to the organisers and presenters for such an interesting and thought-provoking day.