The IPPEA Conference: A treat in Utrecht

Just home from an enjoyable couple of days in Utrecht at a conference, International Perspectives on Participation and Engagement in the Arts, organized by the networkbrought together by Leila Jancovich and her team at Leeds Metropolitan University. The two day conference explored the issues of meaning, measurement, method and values which continue to animate debates about th 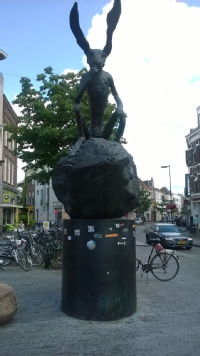 e arts and culture and their relationship with their broader publics. An impressive range of papers and presentations, began with reflections from the playwright America Vera-Zawala on her work in community-based theatre, one example of which concerned the impact of the closure of a mill on the Swedish town of Norrsundet. A play was written and produced with the local community at the precise time of this trauma and, amongst the many fascinating aspects of this process, what stuck with me was the relationship between the artist and the community and the vexed question of who had the responsibility for creative decision making. Participants expressed considerable anxiety about taking control over the direction of the project in deference to the accredited expertise of the theatre professionals. They in turn, for reasons relating to their commitment to the integrity of the process they had initiated, were equally reluctant to impose the right way to proceed. It was an impasse resolved by nothing more complicated than time and dialogue, through which participants took eventual ownership of the narratives of their own experiences.

This story had a perhaps surprising echo in a plenary from Andrea Bandelli about processes of participation in the management of science museums. Science, Andrea reminded us, is not a democracy, although this does not mean that scientific processes, and priorities should not reflect democratically established priorities, or that scientists are not required to communicate with the publics who fund them. There was a degree of fear, expressed by the boards of science museums in Andrea’s study, in managing this balance, especially as science is so regularly deliberately or accidentally, misrepresented in public discourse, as either saviour or villain. There was a telling piece of evidence, though that perhaps this fear was partially misplaced. When asked, attenders of science museums wanted there to be public representation of some form on museum boards. At the same time, when asked if these lay board members should have an executive role in decision making, attenders seemed happy to defer to the experts. Both these stories might be interpreted as evidence of an impulse to be involved with decision-making that gives a lie to one of the more abiding narratives in this field, that of the ‘deficit model’. So much of the official discourse relating to participation starts from a working assumption that people lack some capacity which prevents it. Too often that serves to cement the position of the institution or individual accredited with the means to fill the deficit, who are all too ready to pay lip service to the notion of participation but are also reluctant to embrace the accompanying challenge to their own authority that it brings. It was gratifying to hear some critical voices on this topic in many of the presentations.

CCPS was well represented by both me and Maria Barrett, who presented some initial findings from her research project into the theatre audience of Liverpool. I was presenting some further 'work-in-some-kind-of-progress’ thoughts about participatory arts work as work, which I first blogged about here. It was really useful to think and talk this through in this forum, which included artists who had lived through the processes I was examining. It was especially exciting to meet up with the Artworks team which has been engaged in an extensive sector analysis and important empirical inquiry into this topic. Hopefully these conversations can be productive and ongoing.

In keeping with the mission of the network, the event brought together academic researchers with policy makers and arts practitioners. This sounds blindingly obvious but is difficult to do, and especially difficult to do well and there are inevitably some grumbles in the process. These might be, depending on which camp you’re in, about ‘rigour’ of research, about the use of theoretical ‘jargon’or abstraction, about the fetishisation of anecdote or personal experience or the search for ‘practical’ applicability or the critical examination of assumptions. Such debates can be uncomfortable – exemplified by the intense looking at the floor of some academic colleagues when it came to actually participating in composer Merlijn Twaalfhoven’s Saturday lunchtime interactive music performance. More seriously, such discomfort might stem from public forums like this also being places where professional identities in all these areas are performed, and where stakes in the territory are marked out and defended. That might be inevitable - but the organizers are to be commended for creating a comfortably uncomfortable space for people in these different fields to talk to, rather than past, one another. It was certainly a thought-provoking couple of days in developing my own research. Utrecht was a lovely place to visit and my thanks go to our hosts and organizers for their hospitality.