This last week, cultural policy colleagues from around the world joined us in Hildesheim, Germany, for the International Conference on Cultural Policy Research: the ‘ICCPR2014’. Six of us Centre colleagues were there. I was speaking three times and chairing twice – not an itinerary I recommend. However, it is a great opportunity for making research contacts and seeing what is happening around Europe. 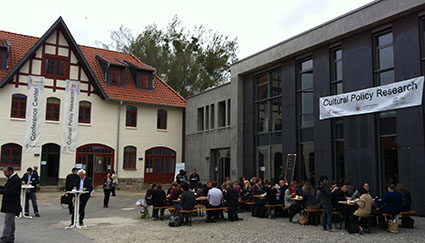 I thought the conference was successful, not just because we found ourselves in a charming place having cycled from the hotel along a beautiful river pathway to the out-of-town campus (see picture above). I thought it was successful because the scope of cultural research was expanded in unexpected ways…. specifically with a critical mass of colleagues from the Middle East, Africa and Asia. The presence of these colleagues was a result of the commitment of Hildesheim Institut fur Kulturpolitik to advancing cultural relations and intercultural dialogue in these parts of the world – where cultural rights, diversity, and sustainable development are not just policy cliches but real areas of ethical conflict and political contestation. For me (at least in the sessions I attended) Hildesheim colleagues threw up a challenge – how do we to advance the cause of justice and solidarity through the world through research? Are we just all playing the Western career game of personal advancement, or are we sharing our academic resources with the parts of the world under pressure or conflict?

Of course – this raises some difficult issues about the limitations of research, as much as the limitations of our institutional contexts. In my Thematic Panel (and it also came up in two other sessions I attended) the question of agency emerged. What is a cultural policy researcher – what mechanisms of legitimacy or representation do we use, particularly ‘in the field’? And, who are the real agents of cultural change in a given place – and do they include cultural policy researchers? The Hildesheim ICCPR seems to be saying that the cultural policy researcher should be a change agent through using the opportunities of the research process as the means of advancing cultural relations and intercultural dialogue (through collaborations, symposia, research trips, exchanges and so on). The processes of research thereby become part of the dynamics of change; or at least, this is the idea, and advanced somewhat by Hildesheim’s work with the Arab Cultural Policy Group and various projects in Africa.

In the conference itself, we had the usual diversity and wide range of topics, from colleagues from around 60 countries of the world. Altogether I listened at various times to research that engaged with important political contexts of UN and EU, national governments, public administration and city councils, NGOs, consultancies, and a range of other civil society organizations. There are few academic fields able to broach this breadth of application. Generally, there seemed to be an increasing attention in cultural policy to ‘place-based’, particularly urban, research. The theme of the conference was ‘cultural policy’ and so one would expect less papers on creative industries issues, and there were indeed few. Our Arab and African friends emphasises the problems of cultural policy in times of serious conflict or the fragmentation of the state. There were also some attention paid to religion – which was good (and something pioneered by Bennett and Ahearne just a few years ago).

It was not that long ago that people could be heard saying that cultural policy as a category of knowledge and public management is becoming redundant – supplanted by a diversity of interests in creative industries, entrepreneurship and enterprise, new civil society and third sector developments, and so on and on. And of course cultural policy tends to be nation-state-based and Euro-centric in its values and ideals. Speaking as an unashamed Europhile, I found this conference's re-assertion of cultural policy very necessary – and a return to the old questions on the nature of the state, civil society and basic democratic norms, necessary and timely. As our host, Professor Wollfgang Schneider emphasized on several occasions -- cultural policy is principally about the the political contexts of culture…and cultural policy research should not just be a force for the construction of knowledge, but a force for social change. But it wasn't all serious -- we also had a drink with some old friends, and past PhD students -- do you recognise them? 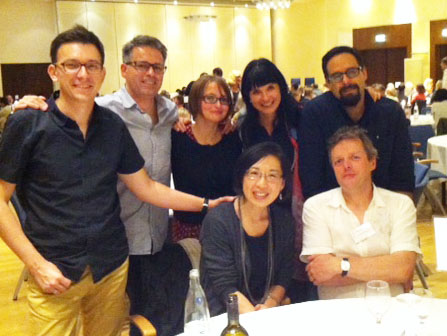