Midwest to Midville: Repositioning the visual arts in the Midlands

This was a blog I wrote after participating as a co-Chair of a seminar at the Ikon Gallery in Birmingham on the 3rd February. Belated, I know, but the seminar centred around a report that has generated a growing debate – on London’s domination of the UK arts sector and national funding regimes, along with the new national policy emphasis on the role of culture in local economy. The report was written by Peter Stark, Christopher Gordon and David Powell, and called ‘Rebalancing Our Cultural Capital: A contribution to the debate on national policy for the arts and culture in England’ (October 2013, see: www.theroccreport.co.uk). David Powell was the opening speaker of the day. 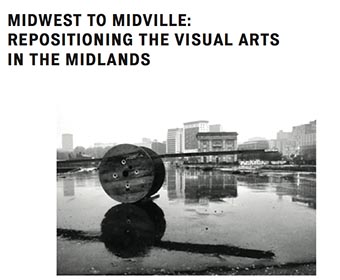 The event featured talks and panel debates, including acclaimed curator Matthew Higgs (New York), Birmingham art sector leaders (Jonathan Watkins, Debbie Kermode, Gavin Wade, and others), Birmingham city councilor Steve Trow, British contemporary art veteran Lynda Morris, and of course humble passengers like myself. It was one of those events that in the run up seemed like just another public seminar. Half way through the day I looked around and realized that this upper ‘loft’ gallery of the Ikon contained most of the central figures in the West Midland’s cultural scene, and turned out to be a gathering of some regional significance.

I’ll keep my remarks to the report, as my job was to chair David Powell. My favourite bit (p.38) is the report’s demand, phrased in terms of …what they spent on the Millennium Dome they give back to English regions [i.e. £600m]. Yet, the report is polemical without being polemic, and deliberately not written as protest or an invective animated by cries for justice. It is written as a sober series of observations on the economics of national arts funding as it has evolved since the post-war period, clearly pointing out the contradiction between national policy aims (for distribution and national impact) and a funding system irrationally skewed towards London. For ‘….the ‘centre’ in England makes decisions on 75% of the public’s funds available for the arts – a far higher proportion than in comparator countries’ (p.8: ES). That the capital needs a greater proportion of the funding is not in question, nor denied are the national and regional benefits of a strong capital centre for culture. What is in question is the basic policy rationales and the seemingly irrational assumption that the regions maintain a proportionately small and locally limited cultural infrastructure.

Personally, I like the report – it flags up some basic issues in relation to transparency and the lack of public information on national strategy-making, as well as frustrations that have been echoed since the 1950s. In fact, it is instructive to see how many of these issues emerged in the landmark 1965 White Paper (the only one!) ‘A Policy for the Arts: The First Steps’. Perhaps – at least this is my reading of recent history – the UK government’s wholesale rejection of the European regionalism movement in the 1980s (in part to form a front against the nascent Scottish independence lobby) has meant that the ‘strong city regions’ trend on the European continent did not emerge in Britain, to our detriment. A necessary devolution of the regions was botched in the New Labour period with the attempt to install city mayors, largely rejected by the city electorate themselves, and the quashed Scots independence movement has latterly come back to bite the London political establishment on the bum. Altogether national arts funding strategy is a skewed botch because the political settlement between London and its regions is a botch. One fact masking this reality is that the funding trend since the 1970s has seen Local Authorities fund culture (often via non-cultural budget heads) up to four times the amount of national arts funding itself. As the report is right to point out, as far as culture is concerned, the concepts of equality and equitable distribution of resources is ignored by the 2010 ACE strategy Achieving Great Art for Everyone (most major document since the 1965 White Paper], and was so ignored too by the Treasury Green Book guidance.

For Stark, Gordon and Powell – all of whom are cultural policy critics with a huge wealth of experience – the solution is actually modest. It takes the form of an adjustment to National Lottery funding, in a way that ‘London’s overall share of public funds for the arts would reduce from 65% …to 55% – still seven times the level of funding per head of population in the rest of England.’ This would take the form of a National investment Programme of £600m over the five years of the next parliament. The new fund would create ‘….additional 33% of arts funding per annum over five years: ‘….our proposition would locate new ‘strategic’ resources at regional and sub-regional level in partnership with collective local authority, business and civil society agencies charged with overall regional development. [See their published response to ACE response: p. 5].

With the RDAs gone, the attenuation of already small local public cultural sectors (look at the size of Birmingham’s culture sector in its regional demographic context), and a lack of a critical mass of culturally competent ‘civil society’ operators, I am not sure how far the ‘local’ (let alone regional – what is that?) is able to handle a sudden capacity-building exercise. Like New Labour’s ‘lost billions’, even huge levels of funding has a way of dissolving into the morass of local authority budgetary shortfalls.

If you haven’t done already – read the report (along with ACE’s response, which makes some good points, if predictably avoids the political heart of the problem). See also Stark, Gordon and Powell's follow-up report, published in April.