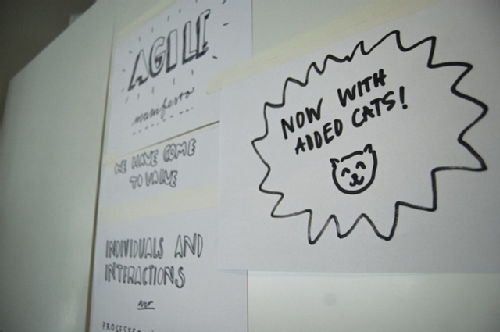 Innovation can end in failure. But failure can also be the starting point for innovation. Last year, together with Ruth Leary and Katherine Jewkes, I was part of the Happenstance Project, an attempt to understand how creative technologists introduce and embed innovation into arts organisations. The report on that project is now available via the NESTA website.

Ruth Leary introduced the word Happenstance to describe the haphazard, undirected process of innovation we were to observe in the three arts organisations. The creative technologists came from a culture of 'fast failing', making rapid prototypes, finding out what worked, hacking bits of software, experimenting and problem-solving. Failing, and learning from failure, was integral to their innovative process. The arts organisations then responded to these interventions and attempted to make sense of them, either applying, redirecting or simply rejecting them.

One of the guiding principles of Happenstance was 'agile' methodology – one resident even displayed a version of the Agile Manifesto (with added cats) as a poster in one of the arts organisations. Agile methodology allows objectives and outcomes to be continually re-evaluated through daily updates. Instead of frontloading objectives at the start of a project, or evaluating after it’s finished, in agile methodology progress is continually reviewed and small changes in direction are introduced to put the project back on track. Talking, preferably face to face, regularly and openly, is vital. Agile methodology evolved in the software industry where teams of developers had to ship software packages to tight deadlines. In our case the Happenstance technologists had to complete their work within a structured timetable of two five week residencies or 'sprints', spread over three days each week. As with Amabile's characterisation of a creative process allowing 'autonomy around process', the parameters for innovation were clearly defined, but process and outcomes were not, leaving the technologists free to experiment and play. In the end this leap of faith was rewarded - the arts organisations avoided micromanaging the residents and were rewarded by new pieces of software and hardware, new approaches to project management and communication, and better understanding and confidence in managing technology. Random inventiveness generated valuable innovations.

A particular talking point for the research team throughout Happenstance was participants’ differing attitudes to failure and risk. The technologists had nothing to fear - apart perhaps from a threat to their own self-expectation and professional pride. They were used to taking risks, and they were used to things not working and having to be fixed - such is the nature of technology. The arts organisations by contrast were playing for high stakes. The management teams were rising stars in their field. The organisations were accountable to funders, audiences and to their staff. Happenstance itself was a high profile publicly funded project. The arts organisations came from a culture where accountability to public funding and the scale and ambition of their work meant that failure was not an option. The technologists' mantra - fail fast, fail cheap, fail often - felt distinctly alien.

Yet the technologists' approach to failure also felt familiar. All of the organisations had experience of working with artists - in residencies, exhibitions and other projects. Failure is integral and inuitive to the work of artists. The creative process is iterative - artists and writers usually progress through a process of experimentation and editing rather than a single moment of magical thinking. When breakthroughs do occur they are even more likely to be subjected to reworking, cross-examination and self-doubt. One could say that self-doubt is the necessary flipside to confidence in the artistic process - starting with the courage to try something new, artists also need the humility to doubt their best efforts. Theatre rehearsal, script development or poetry all depend upon failure and repetition to hone an idea - repetition with a twist. False starts and restarts are the painful stock in trade through which the big idea eventually emerges.

We saw all of this in the work of the technologists. They were imaginative, bold and creative in their thinking - but also always ready to start again, try something else, giving up on one idea or method in order to try another. If something went wrong, it wasn't a disaster. This methodology was something of a revelation to the staff of the arts organisation used to planning and accounting for every resource and outcome..

One unexpected lesson of the Happenstance Project was that arts organisations needed to learn to fail. And of course to learn from failure - nobody should make the same mistake twice. Failure is still a dirty word in the arts and this is not likely to be a popular message with funders. Yet failure is usually a better teacher than success and it is surely an integral part of innovative processes in the arts and in technology. According to Clayton Christiansen, the innovator's dilemma is that success locks the innovator into a particular technology or market, making it much harder for that successful innovator to adapt as markets and technologies evolve. By contrast failure helps us to adapt and to innovate, to try something new. That has to be a good thing, especially for people working in technology or the arts. The condition for this is that managers, funders, institutions and investors need to be less prone to stigmatise failure and to fetishise success, to be tolerant of failure and to learn the art of self-doubt. Perhaps we can post a slogan, ‘Learning to fail’, on their office walls...