For me, and don't ask me why, the most memorable event at a conference is the conference dinner. This one was at a converted aircraft hanger (now the Seaplane Harbour Museum) and was very enjoyable indeed. Colleagues Chris, Clive, and David, could attest to that. Here’s one view (as we were being serenaded by an Estonian youth choir). See below and http://iccpr2018.tlu.ee/ 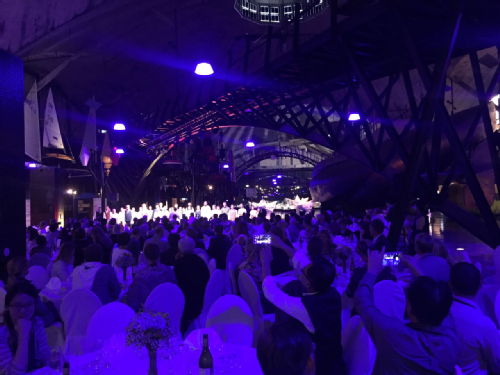 I organized a “roundtable” with Daniel Gad of Hildesheim University – entitled “Arts Rights Justice: policy, activist and legal approaches”, and held on the morning of Friday 24th August. The four participants in the roundtable were myself, Milena Dragićević Šešić (UNESCO Chair Belgrade), Marcin Górski (a legal specialist) and Daniel. We did not present papers, but rather perspectives that invited immediate responses from an audience, aiming to position Rights and Justice as principle subjects of cultural policy research. 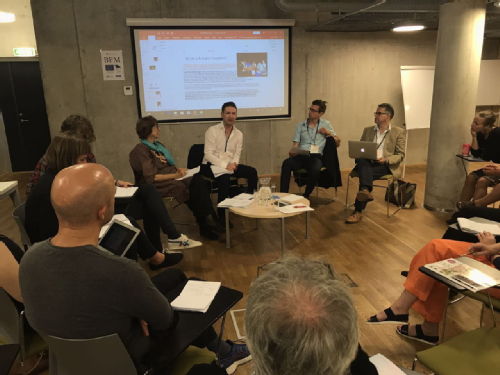 There is a sense in which rights and justice were always implicit in European cultural policy as a public policy, but arguably they are currently not explicit in a way that effectively engages with issues in legal or activist spheres, particularly in relation to increasing urgent issues of the cultural freedom of, say, refugees in Europe, artists under censorship or religious repression both in Europe and beyond. In Bangladesh right now, photographer and activist Shahidul Alam (whom I have met a few times), is currently under arrest for simply making a political statement. This arrest is not, de facto, a form of censorship of art itself (his photography is not at issue), but indicative of a more complex relation between artistic identity and political agency. Moreover, Shahidul is a muslim, with a particular view on Islam, so that this might play a role in the motivation for his detention; contemporary religion is a neglected area of cultural research and cultural policy, and like art itself, religious discourse is highly context-dependent in terms of our understanding its intelligibility, meaning and reception.

The roundtable members were diverse and insightful into their own experience of arts, rights and justice Professor Milena spoke on Rights, diversity and cultural policies in Europe and her experience as UNESCO technical advisor in Cambodia. Daniel Gad spoke from his role as director of the new Arts Rights Justice Academy at the UNESCO Chair in Cultural Policy for the Arts in Development at the Department of Cultural Policy, University of Hildesheim; it is primarily concerned with artistic freedom and protecting artists at risk. Lawyer Marcin Górski is writing a book in international legal perspectives on artistic freedom from censorship. And I am currently interested in the legal discourse on the relation between culture and human rights. Running a masters in arts and development, and have become increasingly interested in human rights approaches, the UN’s so-called “rights-based approach” to everything. More immediately as visiting professor at Hildesheim last year, I taught a short course on Cultural Rights.

Further, I edited a special issue on cultural rights in the Journal of Law, Social Justice and Global Development, available here http://www.lgdjournal.org/[Daniel and Marcin contributed]. And Professor Milena and myself edited the research papers of the next Istanbul Cultural Policy Yearbook (2017-18) – entitled Cultural Policy and Populism – where rights issues and the subject of freedom echoes throughout the issue. I will be launching the Yearbook at the inauguration of the UNESCO Chair in Cultural Diplomacy (Prof Serhan Ada) in Istanbul on the 23rd September.

The phrase “Arts Rights Justice” was probably already familiar from The Arts Rights Justice EU Working Group (under Culture Action Europe within and the EU’s civil society dialogue platform “Access to Culture”). Its importance is that it co-joins the older debates and discourse on censorship and the repression of artists and writers with the UN-level human rights discourse of cultural rights. My policy approach started with the critical observation that cultural organisations in Europe – particularly the UK – are very good at using the rhetoric of rights and justice (particularly access and participation – enforced by law, in the UK with the Equalities Act 2010, Human Rights Act 1998 and previous iterations of both these areas of law and policy), but they are arguably not so effective at understanding or challenging the political and legal powers that issue such legislation…(the role of that rhetoric in ideology and formations of political discourse). Governments can use Rights as a form of patronage and a discursive means of promoting ideology.

By extention, Rights (as an individualisation of political behaviour and self-assertion) is instrumentally important to the global neoliberal order – which has coopted democracy and liberty (for example, an appeal to the supremacy of civil society, “access” and participation as condition of free markets, the individual’s right to choose fundamental to consumerism, and so on..). In the UK, the incorporation of policy directives for (minorities in mainstream cultural life and institutions, the elimination of discrimination, the recognition of interest groups and so on) is conducted by political fiat of national, local government and funding bodies, and not public deliberation. Consequently, arts and cultural organisations are not routinelly involved in deliberative thinking or research on rights – or indeed act as, in the UN’s terms, Human Rights Defenders in the cultural sphere. What would it mean then -- the roundtable briefly discussed -- for arts and cultural organisations to be activist or official Human Rights Defenders in culture? Why do cultural organisations (even eminent or well-endowed cultural institutions) reject potential political agency in this area?

Indeed, the growing discourse of human rights is huge and complex. On the one hand, cultural rights has an increasing profile (with a second UNHRC Special Rapporteur), but on the other hand (and despite its official recognition in the 1966 ICESCR, UNESCO’s own human rights complaints facility and its appeal to the 1948 UDHR for all its seven conventions), cultural rights remain a matter of few deliberations or cases. This is true of UNHRC or anyone else (except perhaps the Council of Europe). This presents some academic opportunities for research, which roundtable members will be exploring in the forthcoming months.

During the conference, we had a range of organised trips: this picture is the creative city development at Telliskivi, north east of the old town (and not easily captured in a single photo). 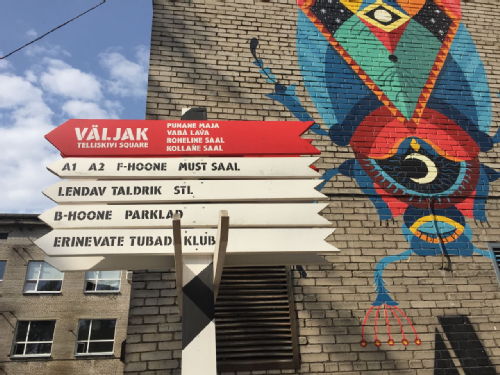