The 2005 Convention on the Protection and Promotion of the Diversity of Cultural Expressions was one of the fastest conventions ever to have passed the UN General Assembly, and the only major international legal instrument on culture and creative industries. I held a seminar on the Convention here in the Centre four years ago, when Justin O’Connor was a Warwick Institute of Advanced Study International Fellow. Here he is now leading a major international research project with participants from the USA, South Africa and Hong Kong, and taking a global view on UNESCO’s main programs supporting the Convention. These include case analyses in Asia and Africa, looking specifically at the Expert Facility, the International Fund for Cultural Diversity and the Creative Cities Network. This seminar, however, was more focused and gathered experts on the Convention, including the Convention management team at the UNESCO HQ. 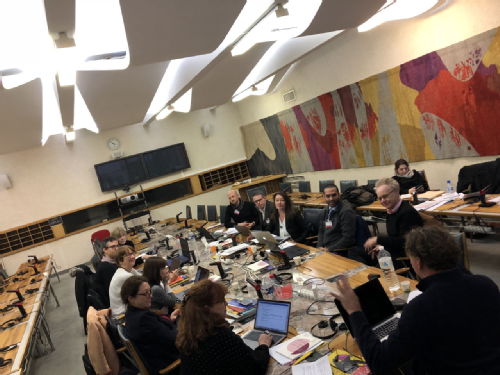 The discussion aimed to frame the projected longitudinal assessment around culture, economy and development – themes some of the group had been discussing since we met as the Global Cultural Economy Network in Shanghai in 2012. UNESCO has a deep and long intellectual history, easily forgotten. And the Convention, despite an ongoing intergovernmental collaboration facility and extensive civil society involvement, is not overly visible within the spectrum of member state national cultural policy commitments. The Convention, however, is not just a legal agreement, but a growing project – of sponsoring research, expert technical intervention, training and evaluation, funded projects and a range of other promotional activities. It has four key goals: cultural governance, cultural flows and mobility, sustainable development through culture, and Human Rights. For me, these are the four globally significant subjects of cultural policy today. The seminar broached each of them, and helped define the scope and criteria for the above project and for the rest of us (me specifically) help define an evolving project on the role of global cultural policy and development discourse in post-Brexit UK cultural policy.

There are 11 UNESCO Chairs (recognized academic leaders) in cultural policy in the world, one of which will be an IAS International Fellow – based here in the Centre, hosted by me -- this coming June: Serhan Ada from Istanbul, UNESCO Chair in Cultural Diplomacy. We will be doing various activities, soon to be advertised.