All entries for Wednesday 12 September 2012

The Art of Management and Organisation 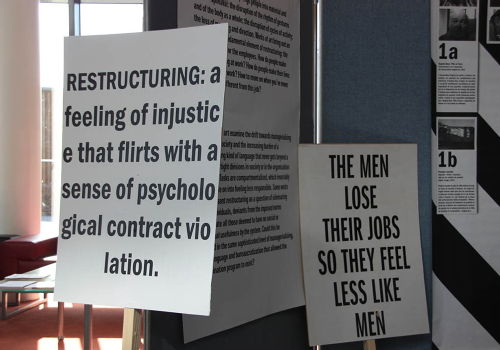 The Sixth Art of Management and Organisation Conference, University of York, 2-6th September 2012.

This was an emotive event for me, given my participation in organising a few of the previous international conferences, and again meeting many delegates who were there at the very first ‘Art of Man’ conference at King’s College London in 2001. Organised principally by Steve Linstead, this year’s theme was ‘Creativity and Critique’, and featured a range of events and exhibits from installation video to performance to Yorkshire sword dancing (the latter only as part of the opening night dinner, I assure you). Attendance at past conferences was generally kept below 200, so as to maintain a certain intensity of interaction, familiarity, community and network. Through the ACORN (aesthetics and creativity in organizational research) network everyone keeps in touch. Institutions like the Copenhagen Business School play a major role in flying the flag for the kinds of research represented at this conference.

The conference had as many practical and interactive seminars as academic paper-led seminars, this year strongly featuring documentary film. My own role was part of the ‘documentary as research’ experiment, which was meant to be an ‘intervention’, but ended up more of a ‘polite engagement’, if I can put it that way. The conference also featured our very own Dr Chris Bilton delivering a keynote (more of an ‘endnote’) disabusing the creativity enthusiasts among us that creativity is not what it’s usually taken to be.

What purpose does an ‘Art of Management and Organisation Conference’ serve? It brings together creative practitioners (from artists, consultants, curators) with academics and industry researchers. The mix really does work. The purpose is to find ways of reflecting on management and organisation theories and practices through creative experimentation (even if that creativity is purely discursive). This doesn’t mean there is no solid empirical research content to the conference – there is in fact quite a lot. There were papers on the creative industries, artist residencies, new incubator spaces, design, the uses of performance, creative pedagogy, prototyping and model making in management training, and on and on.

The location for the conference was the amazing Ron Cooke Hub at York’s impressive new ‘sustainable’ Heslington campus [If you don’t know about it, it’s worth taking a look at the RIBA’s case study on it: see link below]. There were notable conference highlights for me – David Hickman’s presentation on slavery with excerpts from films he made for Al Jazeera; Pierre Guillet de Monthoux on the avant-garde; Jane Gavan’s video installation Aire in the Ron Hub 360degree projection room; and Daved Barry, Henrik Schrat & Cathryn Lloyd’s interactive sessions called ‘City of Thought’, where we contemplated the relation between critical thought processes, architecture and urban community.

Research questions I came away with: too many to mention here. On a practical note, the many sessions referencing or featuring documentary were an inspiration to continue to explore film as a research media. Documentary raises some significant possibilities for developing a non-‘art’ creative media. How do we broach the tensions between visual and linguistic in mainstream academic research, and how do we use ‘objective’ empirical content as a means of exploring experience and social engagement as well as research questions? How can film reestablish an active relationship between the body, space, place and dialogue within research? The conference has its roots in organizational aesthetics and the investigation of perception, affection, emotion and the symbolic landscapes of the corporate environment; these subjects still feature in our gatherings. However, the times have moved on, and most organizations think of themselves being creative actors, employing design agencies, spatial designers, creative management consultants. Apopos Bilton – how does the ideology of creativity actually inhibit organizational management and prevent an exploration of the essential thought-content and reflexivity of creativity? 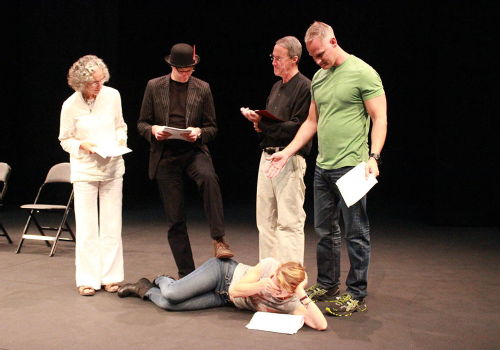 On August 22nd I attended a day-long symposium called ‘Public Art and Self-Organisation’. Hosted by public art think tank Ixia, and hosted at Enclave, (an alternative art space in Deptford, East London), the day was mostly attended by artists and art managers of one kind or another. The day was convened by artist curator Paul O’Neill, and featured engaging talks by digital artist Anthony Gross (Enclave), urban artist Jeanne van Heeswijk (Netherlands), curator Varri Claffey (Dublin), consultant and academic Sophie Hope (London). The theme of the day was pertinent to the both the decline in public funding for public art as well as the growing role of artists in urban redevelopment.

One might ask why, in the last three years of arts funding cuts, public art has been hit far harder than the established institutions of fine art. It's partly because, ironically, Public art’s revenue base is broader – local authorities, property developers, construction companies, architects, cultural organizations, local health authorities, and so on. They have all faced austerity. Also, public art is mostly project-based, hence its easier not to commission more projects than to discontinue funding an organisation. Public-urban artists are a mobile, flexible, low-paid labour force, with few fixed capital assets. Public art is not a heavily institutionalised sector of contemporary art, and, despite its central aim of public engagement and its profound civic visibility, it has always been marginal to art world and cultural sector priorities.

Public art, however, is no longer (merely) ‘public art’ in the sense in which we used the term 20 years ago. It now attracts a panoply of mainstream contemporary artists, urban activists, political artists and new media artists, all who see the social sphere as a crucial platform for ideas and cultural engagement. This seminar featured discussions on the politics of art funding, the development of cultural policy models out of engaged cultural production, the roles of artists in developing new urban spaces and alternative forms of urban regeneration.

The theme of ‘self-organisation’ was elusive, as most artistic production is self-organised in all kinds of ways. In this symposium the term ‘self-organisation’ functioned as a marker for both self-initiation and self-direction outside the usual models of project management, cultural sector patronage and local authority commissioning that hitherto have been the conditions of creative practice for most urban-public artists. There is a sense in which self-organisation is an alter-ego of business entrepreneurialism, in another sense it refers to some new means of using art as a social enterprise. In this seminar, it is resolutely anti-capitalist, participatory, pluralist and avoids the ideological territory of major cultural institutions. It is leadership without management and decision-making that works through dialogue with a gathered community of interlocutors, usually the inhabitants of the urban spaces that are the site for the art.

Questions I came away with: First, as Anthony Gross himself said, imagine ALL public funding of the arts being withdrawn: What then are we capable of doing alone, on existing resources? It’s an important preliminary thought-experiment for a subject of this kind. Second, in relation to myself as a critic, researcher (‘intermediary’?), is self-organisation necessarily artist-led? Perhaps Universities have a role in this. The category of ‘artist’ has in any case become tenuous and needs revision for the emerging complexities of the urban-public sphere. If we are to develop the means of effective creative self-organisation for urban-public spaces, how can these ‘means’ be formalized as models of practice (without becoming formulae, or artistic tropes)? How can we synthesize curatorship, project management and artistic production in ways that address the growing need for autonomy in an ever restrictive social order? We need to re-work the research pioneered in advanced management and organisation studies within the context of public-urban projects, developing an entrepreneurialism that is not simply derived from business models. More urgently perhaps is the need for new ways of occupying and renovating urban spaces without the patronage of local authority-led urban regeneration.