But are you doing anything? 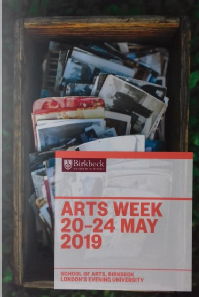 Each year, the School ofArts at Birkbeck University holds an Arts Week – a programme of free talks, workshops, exhibitions, screenings and performances. At the end of May this year, I took part in one of these events, a panel discussion on ‘gestation and incubation’ and their relationship to outputs and productivity in the academic and creative worlds. Titled ‘But are you doing anything?’, the idea was to explore how ‘thinking, talking and meditating rate as work’. We were asked for our interpretation of ‘activities/ways of doing when it comes to incubating, hibernating and gestation’; and whether ‘thinking and learning, if not shaped into visible outputs, [can] be perceived as a form of practice’. The panel members were chosen for having ‘a foot in two camps’; i.e. we are all practitioners in the arts at the same time as having academic roles: Lina Džuverović, Curator and Lecturer, Film, Media and Cultural Studies Department, Birkbeck; Rachel Garfield, Artist and Head of Department of Art, University of Reading; and myself, Arts Manager and Associate Fellow, Centre for Cultural and Media Policy Studies, University of Warwick. The session was chaired by Simone Wesner, Lecturer, Film, Media and Cultural Studies Department, Birkbeck, and an alumna of our Centre.

The panel discussion and subsequent contributions from the audience, were fascinating and thoughtful. The organisers of ‘But are you doing anything?’ will be creating a podcast from the recording of the event; and they’re looking at how they might develop further discussion on the topic. In the meantime, here are a few of my thoughts – based on my practice as an enabler for others working in the arts, my academic interests in the practices of others, and my own experiences as an academic writer and researcher:

At the session, I proposed the idea of gestation as a spectrum (cf. diagram below), starting from the fairly ‘passive’ or ‘invisible’ commencement of the process, which might begin with just noticing and letting things in (what children’s writer and illustrator Benji Davies calls getting ‘seeds of ideas, stor[ing] them, and a few years later, they turn up somewhere’. Then – although as I suggest later, we shouldn’t necessarily see this as a straightforward progression from one step to another – there are the acts of mulling over, reflecting on, and thinking, which might be followed by the action of trying things out, then shaping and refining. In the arts, these would include, for instance, as a ceramicist suggested to me, a potter discarding the first nine pots s/he makes for the tenth that is built on the experiences and ideas of the preceding ones; or actors and director in the rehearsal room ‘getting a play onto its feet’ to see what it looks and feels like, whether it works, rather than ‘just’ talking about it (thus, the talking about it would be somewhere on the spectrum between thinking and doing). A similar process is at work in the field of writing. Academics and other writers I’ve spoken to vary in the amount of drafting and re-drafting that they do. In my own academic work, I tend to do quite a lot of my thinking through the act of writing, i.e. writing several drafts to get to what I want to say more exactly. So this action of drafting and re-drafting would certainly fit into what I have termed both the ‘trying things out’ and ‘shaping, refining’ stages of the spectrum.

Coming back to the point that this is not necessarily a one-directional process, I suggest it’s a constantly two-way engagement, backwards and forwards, as it were, between the elements of this spectrum (hence, the arrows in the diagram). In addition, we could also think about a ‘to-ing and fro-ing’ process between gestation and the part of practice that directly produces the output – i.e. gestation doesn’t just occur as a completed phase before production, but can also happen at various points during the production stage. Thus the movement between the invisibility of the ‘early’ stages and the greater visibility of ‘later’ stages is one that will also have a backwards and forwards motion.

How much of gestation is solitary and to what extent can it be collaborative? If there is a spectrum of gestation, then some of the activities I’ve included in it can and do involve forms of collaboration, such as informal conversation or more formal discussions, and also trying things out.

A question we were asked to consider in the set-up of the session was to do with expectations that might curtail or undermine gestation – the demand for outputs, for showing and proving that one is ‘doing something’, and how one can negotiate or resist these demands and ‘allow for […] incubation - the dormant phase in the creative process’. In fact, as an arts manager with responsibility for securing funding for arts organisations, my role has sometimes involved me in disturbing or interrupting the gestation process of others. For instance, when I was working for a theatre company, I would have to ask our artistic director for thoughts about a show that he wouldn’t be putting into shape for at least a year, because the funding for it needed to be applied for long in advance. The same is also often the case in academic life; i.e. that demands for output by the requirements of the REF, grant funders, etc., can disrupt and curtail the gestation process. The constant pressure for outputs is graphically illustrated in these words from an arts producer who attended a workshop about co-creation that I organised:

“I really valued the time to think and talk, but it’s tricky to get more than 1.5 hours out of the office if it isn’t directly contributing to one of my team’s outputs for that week.”

This is also something that the many artists working in schools have to deal with:

“When we'd sat round a table (us, the students and the teachers) and said 'What do we do now?', there would be periods of silence while we all thought. […]the teachers found it incredibly uncomfortable. […] it made them realise how little time they put aside for thinking in the classroom, because there's so much emphasis about bubbling along, and 'Let's be active, let's be doing, let's be talking'. […] Can we be brave enough to just be quiet and think?”

None of the panel in ‘But are you doing anything?’ was researching the subject when we were first asked to take part in this discussion; but Birkbeck’s request means we have now begun the gestation process…… 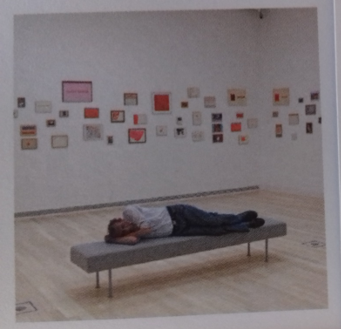 Mladen Stilinović, Artist at Work Again (2011). At Ludwig Museum, Budapest, 2011. Photo: Boris Cvjetanović. Courtesy of Branka Stipančić. (Image from publicity for But are you doing anything?)