All entries for Monday 01 September 2014

Art of Management and Organization

I have just come back from a conference at the Copenhagen Business School – called ‘Creativity and Design’ and run by the research organisation The Art of Management and Organization (of which I am the Chair). Apart from being involved in the conference planning, I was also running a stream (with Ian King, professor of aesthetics and management at the London College of Fashion) called ‘Fashioning the organisation in the creative city’. Awful title, I know, but it emerged from a stream we participated in at EGOS 2012 in Helsinki and organised by our friends at CBS. 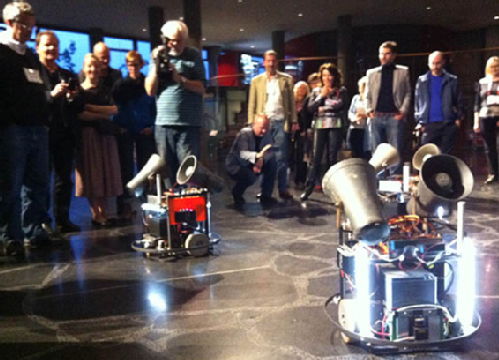 The photo above is one of the art inteventions at the conference – the German art collective ENQuETE Art [Experimental Nonpartisan Questioning of Enduring Technologies in the Economy – it sounds better in German, believe me!]. These are four robotic creatures that are replete with sensors and able to interact with the conference audience, all the while performing a role in a drama (the loud speaker component bleats out rhetoric).

Our stream attempted to explore ‘fashion’ and the fashioning of the body (as style, expression, identity, medium of knowledge) in organizational life, with particular reference to the new cultural identity, policy and urbanisation of cities. The backround for this urban cultural dimension was discussions around the ‘new model worker’ (and ‘creative class’, etc.: Florida, 2002; 2005), new mobile ‘cultural creatives’ (Ray and Anderson, 2000), ‘bourgeois bohemians’ (Brooks, 2000), all situated within the new urbane ‘economy of the inner city’ (Hutton, 2002). Fashion is not just about clothes; it is the deep structure of the consumer economy, and an economy whose multiple foci are the world’s largest cities (now routinely referred to as fashion city, media city, creative city, ‘smart’ city, so on). The term ‘fashion’ is intriguing – so associated with the global circulation of ‘catwalk’ imagery and celebrity designers, and yet in reality is much more. It is a form of implicit cultural policy (a global cultural order for the world’s largest trades -- the garment trade, along with ‘accessories’). Yet the models, templates, patterns, visual and symbolic communication that determines the actual shape and aesthetics of fashion items (from clothes to bags) often emerge from the intimate creativity of the designers studio and his company. Fashion is both art and commerce, supply and demand, retailer and consumer; it is ‘a mystery’ (Esposito, 2011: Czarniawska, 2011). Last year Ian and me published a paper in the Scandinavian Journal of Management on this subject, pondering why fashion is still derided within mainstream cultural research. 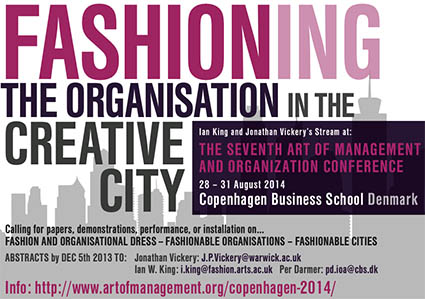 Apart from organising the stream, we also contributed a paper – which attempted to be multi-media insofar as I screened an edited version of a film as I talked my way through it. The paper was called 'An urban phenomenology of fabric: on Wim Wenders' 'Notebooks on Cities and Clothes'. The film was Wenders 1989 documentary, which, I must admit, some find very tedious. To me (when I first saw it in 1989!), was a revelation. I have since wanted to revisit the film and say something about it – about how Wenders, who at the time had little interest in fashion, through the process of making the documentary uncovered something quite profound about its social and aesthetic meaning. In the paper we attempted to explore the relation between fashion and what we called organisational urbanisation (why fashion is associated with cities, and emerges from the experience of urban modernisation), and what the implications of this are for thinking about the study of organisations. Commissioned by the Centre Pompidou, Wenders explores fashion through an intimate encounter with Yohji Yamamoto, the Japanese fashion designer. The documentary flips between Tokyo and Paris, exploring questions on the changing experience of the city and human identity. We took ‘phenomenology’ as the subject of the paper’s method – I say subject as the paper doesn’t ‘do’ phenomenology, it just uses it as a framework to think deeper on the relation between the body, perception/experience and environment (in this case, the city). The ‘fabric’ aspect relates to Yamamoto’s method of design, which begins with his experience of touch and feeling the material, as well as his reflections on the material conditions of human identity. The paper will be published in October by CBS in the conference proceedings. 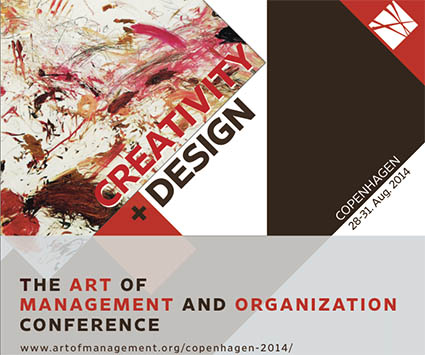