OK, here it is, the end of chapter 6! Dedicated to the lovely Laura as she's just cooked me dinner and is letting me use her computer! I feel so looked after! I know the perspective is a little out in the first panel on page "j", but I'm experimenting as I'm very aware that the comic isn't very dynamic at the moment…

So the question is, does anyone know what's going on?! are people understanding? It would be great to hear what you think has happened–as I said, I'm offline for a week so it'd be nice to have some things to read when I get home!

A Day of Celebration!

Today is a day of dual celebration, as it is my parents 30th wedding anniversary! Yep, they were getting married at my age…oh well…they're on holiday, probably having a lovely time!

And, of course it is My Imaginary Life's first birthday! Balloons and streamers abound! Now, this special comic will only be shown on this very blog because if I get a keenspace, I'm not going to turn back time, hopefully when it's on there this time next year I'll be thinking of a way to celebrate it's second birthday!

So aren't you all very lucky! I am aware of the mistake on these pages too, let's see if anyone else is… Ghost in the shell;stand–alone complex

I don't even think I really understand what the Stand Alone Complex is…it's something to do with being alone in a crowd, it's a mental condition, I think, and obviously the Laughing Man had it–is there a hint the the Major and/or the Chief suffer from it too?

This series is in stark contrast to Cowboy Bebop, which I watched last week. There is much more complex talk in Ghost, lots to take in about political standing, AI and Cybernetic technology that I think watching the subtitled version can be a real strain; though when there's a lot of talking there's not so much to see on screen anyway, the battles are usually backed with music.

I also preffered the animation style of the origonal film (with it's back–drops borrowed from Bladerunner!) and even the characters; most of them don't change from movie to series but they really go for the fan–service angle on the Major more; I mean, would you really stroll around in what appears to be an armoured leotard, only occassionally wearing trousers? The optic camoflauge works fine over the normal clothing of all other team members…her personality type is a lot sassier as well, almost as though she's supposed to behave like that because she's a woman. There is no sexual tension in ghost in the shell, it's far more intellectual; in the film the optic camoflauge required nudity and she was the only one advanced enough to have it (being the only member with a completely cybernetic body) but there was none of this flirting with poor Batou; it doesn't suit her!

Bless the little Tachikoma, though!

Major Kusanagi Motoko is, however, awesome! OK, I get it, I give in. No more pleas for reactions, I'll just put the pages up, even if only Casper reads them! (come on, Keenspace!!!)

I've put even more effort in this week, as I've sorted the gallery so all the pages (bar one mysteriously missing from the proglogue) are in story order! So, if anyone is new to the comic or has been confused, now it's easy access, baby!

I answer to Casper's question, Christine has never been a pirate. Check back to Chapter 3 and it shall aaall make sense. Possibly. In other news, Pirates of the Carribean 2 is ace! it's really funny, and Orlando Bloom has dried up a bit (ie he's not such a wet blanket anymore!) So go see it!

Crap. An error just made me start over! 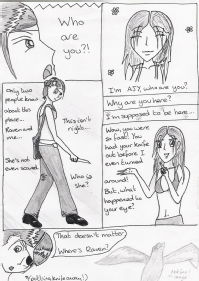 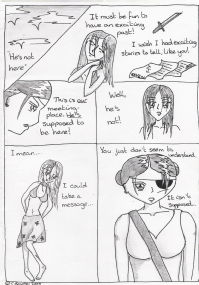 OK, the new girls name is pronounced "Ah–jee". And the reason the bird on the bottom of page 3 has "not final image" and is in oencil is cos I need to look up pictures of ravens to make it more acurate before I colour it black. I'll probably do that when I do the reduxes in August. Yes, I'm still hoping Keenspace will give my a page so when I no longer even have a job to keep me occupied I'm going to redo the prologue and any other pages I'm not happy with.

"Why put up an unfinished page?" I hear you cry. Because I still hope there are people interested in this thing and for their sake want to keep it updated as often as possible. I'm on campus today and possibly tomorrow but then have 2 day shifts and may well spend Friday sleeping, so as it (the bird!) wasn't as important part of the story I thought I'd get them up today!

Any other questions or comments, you know where they go!*

The other rather exciting thing is, My Imaginary Life is coming up to it's first birthday! I didn't actually date the pages, but the first entry about it was July 24th, so on that day (Or close to it) I'll produce something a bit special–if you have any suggestions what you'd like it to be, put those in the little box also! If I had a keenspace, the occassion might also me marked by people making cute avatars or fanart, but somehow I doubt Warwick blogs will produce anything of the sort!! so suggestions is all I'm asking, people. Please?!

*The little box underneath, just answer the security question if you can't log–in! ;–)

OK, must apologise for lack of updates but not my fault–James' house refuses to give me access! damn…

Also, I'm as surprised as you to discover that chapter 5 is finished! My Imaginery Life took on a life of it's own this week (which I think is awesome) and said "Right, that's that, we're on chapter 6 now, and this is what's going to happen…"

It's pretty cool, cos I think that's how a comic (especially one like this!) should probably go. The pages come when they sort of consume you and all your attention, which is why the cover isn't as good as it could be (spacing's off, still don't know if I like the colours) but the pages are going really well because I really want to get on with the story! Some of which will hopefully start making sense soon!

I played around with the saturation a bit, so today you're going to get both versions of the cover (please express opinions freely) and not one, but TWO story pages, because I wasn't happy leaving it at the end of page one. And because I love you all!

Special love goes to Laura today for motivating me to join her in the LARPS cupboard and sort it the hell out–including the lock, which apparently only needed WD40! Anyhow, let the update begin!

This update was bought to you by David Treharne, his photoshop skills are awesome!