The Blog of Craig

Getting a Visa – My Trip to the US Embassy

Yes, its the latest installment in the journey that is my american exchange year which after all the hype and paperwork and hassle actually begins in under 4 weeks.

I have held back on making this post public until I have actually received my visa to avoid the US governement when researching me reading this post and as a result not giving me one.

Anyway to the story, It started on a Virgin Train unfortunately not a nice Pendilino with air con but a couple of old slam door carriages pulled by a freightliner which transported me from Coventry to Euston.

I will now skip the boring bit of meeting up with friends and family for lunch etc. etc. and just get to the interesting bit of going to the US Embassy a.k.a the armoured fortress.

The perimeter of the place has 2 heavy duty fences and police with large machine guns patrolling between them. They even have those cool mirror things to look under delivery vans.

To get through the fences you have to prove you have a visa appointment, show your passport, put your bag through an X-ray machine and empty your pockets and walk through the airport style scanners. Once you get to the entrance of the building courtesy of an armoured escort all adding to the intimidation aspect you have to hand in any digital recording devices such as laptop, palmpilots, audio equipment but you are allowed to still carry your mobile phone on you providing it is turned off (and I expect they would take seriously any signs of use). This is likley only due to the fact that if they confiscated them there would probably be so many it would take ages to sort whose is whose afterwards.

Next step is to get your ticket like you sometimes do at the deli counter except these are obtained by scanning the barcode on your appointment letter into a machine. And then theres the first demoralising bit, there are 100 people ahead of you and you have to sit in this rather cramped waiting room for over 90 minutes just to hand your forms in and be fingerprinted for the first time. They fingerprint both your index fingers and at this point they take your forms away to be considered and investigated.

Next comes the lottery for an interview. Slightly bigger than the National Lottery with normally another 100 people in the draw. It all depends how long they take to read all your forms and check them and make sure there are no mistakes. I was glad I have double checked all mine meaning I only had to wait about another 90 minutes before my number 348 flashed up on the plasma screens. It makes you almost want to jump and cheer but with only few minutes to get to the interview room before you loose it there was no time.

Here I was fingerprinted again to make sure I was still the same person even though my photo is on my passport and application forms which they have had for 90 minutes by this point. The interview itself only lasted about 5 minutes with nearly everything being straightforward although I thought for a minute I might fail the financial section due to me not have having an up to date bank statement but I was ok and provisinally granted a visa subject to background checks. They kept all my documents and passports which I had to pay a cheeky £9.50 to get couriered back to me when they had finished processing them in about 5 days and I was free to leave the fortress/prison.

It was so nice to get outside seeing as even though this was an american building it definitely did not have any air conditioning on that floor and also it was nice to get my laptop back which I was surprised didn't get lost amongst the large pile of other IBM Thinkpads at the desk.

At least thats now the last box ticked on my list of major obstacles before I go to america although paying £150 for the privelage of sitting in a hot room for over 3 hours with 250 other people wasn't exactly my idea of a good deal. 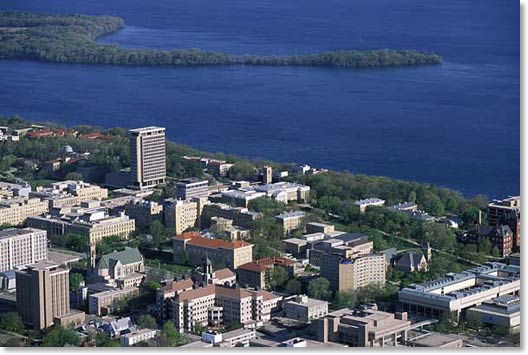 Well I pretty much told everybody now in my Warwick bubble that it seems that I will be study what they use to call the land of the free, America providing:

Went to see those lovely people at STA Travel today to see about flights, looks like I will be stuck in a British Airways plane over the atlantic for 7 hours in August to get there, and the price I pay to be stuck in a metal can with 500 other people: £343, but can't grumble as I'm not paying! Just selling my soul to the Warwick University and Bournemouth Borough Council who will graciously pay for most my travel.

That will take me London-Chicago and from there will probably bus it. I wonder if its possible to see the musical Chicago in Chicago? that would just be cool!