Right, it’s far too long since I last blogged. In fact I haven’t made a flying-related entry since first the React flight after I passed my PPL, so I’ve got a fair bit to waffle on about! Basically at the moment I’m back in England, having flown back on March 1st. I’m currently in the second of two weeks off; next weekend I’ll be heading down to spend two weeks of ATPL Theory revision/cramming at Bristol Ground School and after that – in the week before Easter – the first seven exams.

The flying has been quite hard work since passing the PPL; obviously, being quite far behind, there have been a lot to cram in to try to catch up. Technically I should have finished the single-engine flying by now and be ready to move on to the Twin Stars when I get back, but I’ve still got about 16 flight to go on the Cessna yet. It’s doable in about 3 weeks if the weather’s good, so I have definitely made up some time over the last month. One reason for the lack of blogging over the past month has been because it’s been so busy. Not only have I fortunately been scheduled loads of times anyway, but the planning side of it takes quite a while, not least because we’re often limited as to where we can go by the weather (cloud has been a major issue at times this summer). It can sometimes be tricky picking routes that don’t keep passing over the same places all the time! Also, you sometimes have to make late changes to what you’ve planned so I’ve spent a fair amount of time behind the planning desk of late. Some of the flights are quite draining; being given mid-air diversion after diversion by your instructor puts you under pressure and you have to learn to get through the process smoothly but quickly. I’m getting better at it but it’s hard work. It certainly teaches you to think more quickly.

There have been some nice days though and it’s been great being able to take passengers up now I’ve got my licence, particularly as I’ve always made sure they’ve brought a camera! For those people who haven’t got the benefit of Facebook access, here’s a few of the best pictures I’ve had taken in flight (mostly courtesy of Mr. Power and Mr. Lee): 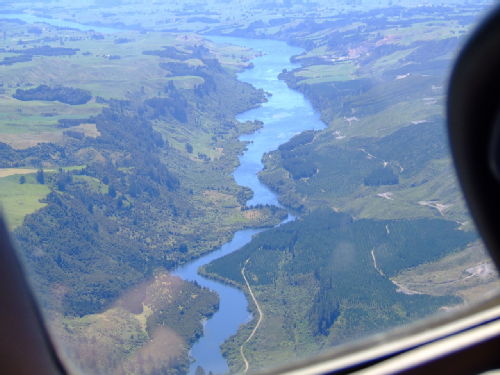 (note the bouncy castle… this was just turning final for runway 18 on the Saturday afternoon we had the party at Clearways.) And a cheesy one to finish: