I’m writing this on a Friday afternoon of relaxation and generally doing not very much at all; the last week or so has, for some reason, felt like one of the most stressful weeks I can remember for a long time. I don’t know anyone who enjoys flight tests and I certainly don’t, but after 32 flights of building up my hours, practising various navigation techniques and becoming more confident in my handling of the aircraft, I finally reached the end of the single-engine phase of the course. I hadn’t felt too worried about it up until about the night before, and then when the schedule appeared and I had my slot down for the next day (this was last Friday) the nerves suddenly started to flare up big style.

Why, I don’t really know – this particular test wasn’t for an official rating or licence issue, it’s an internal company assessment and therefore although it’s a test, it’s not a full-blown “exam” as such. It didn’t get off to a great start last Friday when we went. The weather closed in pretty quickly and we were only airborne about half an hour before we had to come back. That was not good, considering that I’d spent ages psyching myself up and trying to prepare well for it. So I spent the afternoon being annoyed by the crap weather then had another go at it the next day when it was slightly better. To cut a long and boring story short, I failed. A lot of the flight was OK, but there were certain bits that weren’t and they were apparently pretty crucial – handling of the controls not smooth enough, not enough use of rudder during stall recovery, forgetting to look out before going into a glide – things like that. I confess to feeling a little hard done by, but then who am I to talk? I’m not an instructor with hundreds of hours of experience, so it was probably perfectly justified. I also don’t deny being bitterly disappointed, being the first person to fail that particular test for months. But, as people kept saying to me, what’s important is how you take the feedback on board and improve on it and come back better next time.

I then had a bit of an enforced break from that for the rest of the week to sweat over the next attempt; I had to wait a couple of days for the meeting you have when you balls up a flight, then I had two days of ground school for flying the multi-engine aircraft. (Being only one flight away, it made sense to go to it than wait until finishing and then waiting another 2 weeks doing nothing before the next lot were ready for the ground course.) It was great because it really felt like we were getting somewhere – multis after months and months of flying the singles! I’ve been so anxious to get on to this part of the course because I’m roughly 5 weeks behind at the moment and this part of the course is quite time critical, we have to finish before returning to the UK for Bristol part 2 because we don’t come back here again after that. So on that basis, it was great to be in the classroom and feel like I was making progress towards that. Having said that, knowing that unlike some of my classmates I had another test still to come on the C172, I couldn’t relax and enjoy it 100%; it was rather like the proverbial dangling of the carrot.

Thursday then came and I was scheduled for my re-test. It was meant to be at 10am but the weather was again pretty bad, with a cold front passing through the area so we managed to re-schedule for 1pm when hopefully it would be a bit clearer. It was, but there was still turbulence forecast right along the route I’d been given. We still went and I somehow passed but I’m still struggling to believe it. In my opinion, the flight was far worse than the first one. Towards the end of the first navigation leg my composure deserted me completely and I missed seeing the turning point (despite finding out later on that I’d been pretty much directly overhead it) and, despite trying to apply the correct techniques I’d been taught, had no idea where I was at one point. I did manage to find myself again and was given a diversion, which then proceeded to be the most messy diversion I’ve ever done. Despite me getting flustered and feeling overloaded when I shouldn’t really have been, I still managed to fly reasonably on track, my techniques more or less worked and I arrived at Matamata airfield exactly when I said I was going to. Although it had worked, I was just so annoyed that it was nowhere near as good as it could have been. The rest of it wasn’t too bad, but there was a bit near the end where I was meant to intercept and track a VOR radial and it took ages to intercept because the compass and DI weren’t aligned and because I was feeling knackered I didn’t pick it up. There was just time for a bit of final embarrassment entering the Hamilton circuit; I thought I’d heard the ATIS saying the crosswind on runway 18 was gusting to 20 knots, which is outside the Cessna’s max demonstrated crosswind limit so I requested runway 25 instead. It turned out it wasn’t because loads of people were using 18 at the time and my instructor immediately jumped in and told the tower to disregard my call and 18 would be fine. Felt like a bit of an idiot at that point.

After another slightly iffy crosswind landing and shutting down at the fuel pumps, I didn’t move for a minute or so, I just stared out of the window unable to believe that I’d gone and failed it again; after how erratic I thought my navigation had been, there was no way I was going to pass. I sent a few depressed texts to Naomi, feeling any remaining confidence in my flying draining away. I’d already felt short of confidence before this one because the more I thought about the previous one, the more I thought it hadn’t really gone that badly and after 5 days of not flying and also not sleeping too well the night before I was sure I wasn’t going to improve on my previous performance. I was probably stressing about it way too much considering a bit of extra remedial training would have been the absolute worst outcome, but honestly I don’t think I’ve felt that nervous since just before my Phase 4 before I was accepted on to the course. So when I was told that I was being allowed to proceed on to the multis but there was a lot of hard work ahead, I was just more relieved and grateful than anything else. I should have felt happy, but I didn’t really. Just relieved. I wasn’t happy with how I’d flown and I wasn’t happy that I’d just about passed. This was the end of the phase, and I wanted to pass well, to show what I could do.

Still, as I said, that’s it for the Cessna. It’s goodbye to the 172, which overall has been great to fly and a trusty workhorse. It has its detractors and I admit the Robin is pretty nice and handles like a dream, but for cross-country navigation and general comfort I know which one I’d rather take. And it’s hello to this:
(If you’re reading this note as imported into Facebook, you won’t be able to see the picture; click on the link at the top to see the original version in Warwick Blogs.) 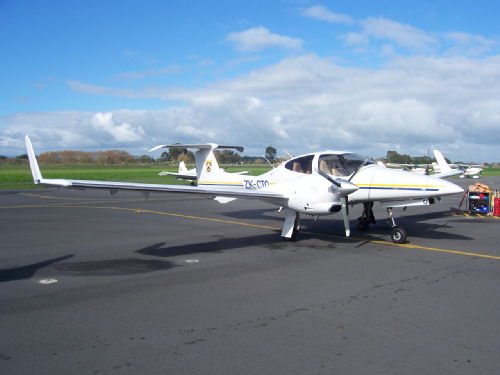 For those of you reading who aren’t cadets and/or haven’t come across this aircraft before, this is the Diamond DA-42 “Twin Star”, which we do all our twin-engine training on between now and finishing the CPL and IR. The one shown here is ZK-CTO, one of eight we have here in Hamilton, and this one was delivered to our training centre new only last month and is the one I have my first flight in tomorrow! It’s diesel-powered (runs on Jet-A1 but has two 1.7 litre turbo-diesel engines) which means it’s very efficient and, although not about to win any beauty awards (particularly with those ridiculous winglets) it has plenty of electronic gadgetry to help us out; for example, where as in a conventional twin piston you’d have separate levers for the throttles and propellers, the Twin Star has one single power lever for each engine and the propeller pitch is controlled automatically. The best bit, however, is the instrument panel which is dominated by the fantastic Garmin 1000 “glass cockpit”.

(Photo linked from the Diamond Aircraft website, I’ll replace it with my own when I’ve taken one inside the aircraft.)

I had a lesson on how to use it today, and suffice to say I can’t wait to get my hands on it tomorrow! It’s a brilliant piece of kit, it does absolutely everything. I’ve got a simulator flight first thing in the morning, then the real thing later on so I’m really hoping the weather’s good. At this stage, while we’re learning how to fly the aircraft, the flying is still VFR; 5 or 6 flights’ time (plus a few more sims) the weather ceases to be as much of an issue because we’ll be flying IFR. I can’t wait to get on to that. Still, got to learn to fly the thing first and on that note, I’d better get on with revising the ground school notes!