These are just my favourite organisms… This does not necessarily mean you will ever meet them.

Anna's top ten…yup you guessed it…

Well, it had to come sooner or later. Anna's list of the top ten bacteria. Based on overall greatness. Looks, ability, these guys have got it all-or some of it at any rate!! After much deliberation…

1. Escherichia coli The Daddy of all bacteria. This guy kicks arse. Model organism, and can cause just about every disease going (well, sort of). Plus if it's _E.coli_O157 Crawford will not shut up about it. Always a good sign. 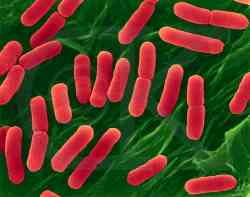 2. Caulobacter crescentus Groovy little thing, this one- will permenantly attach to a surface and then produce a flagella-ed version of itself to go off and find more food. Plus it's crescent shaped! 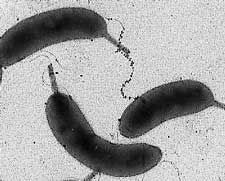 3. Treponema pallidum Better known as 'the one that causes Syphilis', this lovely thing not only causes a particularly nasty disease but is also pretty and wiggly. 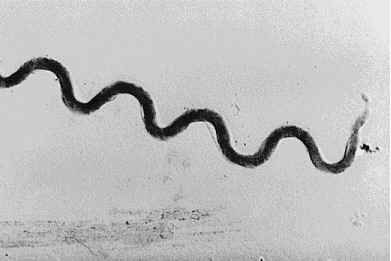 4. Bacillus anthracis Bit of a controversial one this (but OK Chris, it can go in). Differs from B. cereus and B.thuringiensis by the possession of two plasmids, otherwise, all the same organism!! Better known as causative agent of anthrax, it's a bioterrorist favourite because it can make spores- nice and hard wearing, ready for easy dispersal. This has apparently been tried in Japan by a terrorist organisation, with no discernible effect-but who knows...? Kind of looks like E.coli, so no pretty pictures.

5. Agrobacterium tumefaciens Old favorite of mine this one-causes tumors in plants. Injects it's own DNA into plant cell where it integrates into the plant cell chromosome, stimulating the prodution of the tumor and lots of food for the bacteria!! V. cunning. I think this is just a funny picture. 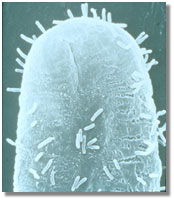 6. Proteus mirabilis causes, erm.. UTIs (work that one out!) Pretty cool because it can differentiate from a swimmer with one flagella to swarmer with lots of flagella-looks quite good on a petri dish! 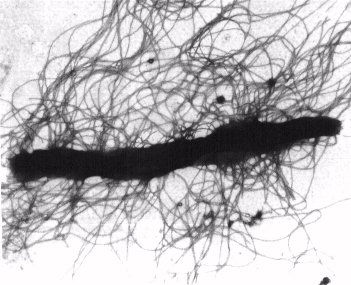 7. Listeria monocytogenes Couldn't really miss this one out-my dissertation is on it! Not much of a problem unless you're pregnant or immunocompromised, but can cause meningitis and abortion so not pleasant. Burrows it's way from cell to cell by making a little tail for itself, and pushing, hard through the cell membrane. Also makes it easier to hide from immune system. Clever.

8. Helicobacter pylori Causes stomach ulcers and has links to stomach cancer. Something like 1 in 6 people carry it. Survives the acidity of the stomach by creating a protective cloud of ammonia which neutralises the acid in immediate vicinity until it can bury itself in the nice neutral gastric pits. Ahh. NB. not actually this colour. I don't think. 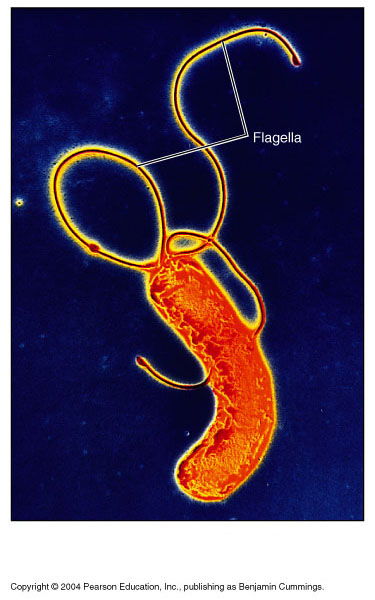 9. Mycobacterium tuberculosis. Causes TB,or consumption (for ye oldies). Bit of a nasty one this, spread by coughing. And for the health concious of you, 1.86 billion people are infected worldwide-though I hasten to point out that by no means of all of these people are infectious!! Still, a clever little blighter. Differs from your standard bacteria by cell wall structure-besides other bits and pieces, and requires a 6 month course of a combination of antibiotics to kill it. And that's when it's not drug resistant. Still, all had your BCG I hope..

10. Wolbachia spp. Recent find this- most commonly infects the fruit fly, but in woodlice has a rather interesting effect. It will turn an infected male louse into a fully fertile female. Something to do with its effects on sex hormones apparently..

So that's my top ten. Not definitive, I never know what else I may come upon in the course of my studies-plus those are the ones that came off the top of my head..(not literally you understand!)

However I do have a couple of honorable mentions…

Deinococcus radiodurans-seriously cool this one. Can survive ionizing radiation of up to 30,000 Gy. We can be killed by less than 5 Gy. Not bad really.

Thermoplasma-likes heat, and low pH. So hot acid then. Loverly.

and… just because it's pretty… here is a picture of a Myxobacteria fruiting body.. 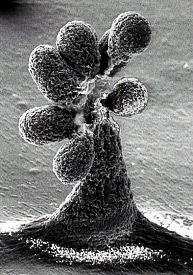 And now I'll shut up about them. Well, actually… since I'll be reading about them for the next five weeks… I make no promises!!