The military history of Gibraltar is hard to avoid. At almost every turn there is a reminder that for most of its existence Gibraltar was a fortress and a garrison, a vital projection of British power in the Mediterranean. Yet a small part of Gibraltar’s military history is almost entirely unknown, and certainly unnoticed by visitors and residents alike. For two years, between 14 March 1817 and 9 March 1819, a thousand African-born soldiers, members of the 4th West India Regiment, formed more than a quarter of the resident garrison.

The 4th WIR was formed in the Caribbean in the late 1790s but the vast majority of rank and file soldiers were born in Africa and either purchased from slave ships by the army or, after the closing of the British transatlantic slave trade in 1807, recruited from the slave ships of other nations intercepted by the British. 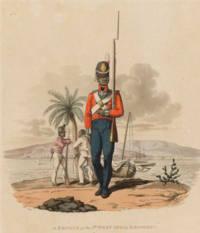 The decision to send the 4th WIR to Gibraltar is not readily explained as this is the only instance of any of the West India regiments serving in Europe.The most plausible reason was the high degree of resistance possessed by black troops to tropical diseases, particularly yellow fever. Gibraltar was prone to periodic epidemics of yellow fever that severely weakened the garrison. The epidemic of 1804 killed 894 soldiers, about a third of those serving in Gibraltar. A further 384 soldiers died in an 1813 outbreak and 78 in a smaller recurrence in 1814 Those born in West Africa were known to have immunity to yellow fever, indeed preserving the health and lives of European soldiers was the primary reason for raising these regiments in the Caribbean in the first place. The 4th WIR disembarked at the New Mole in Gibraltar on 14 March 1817 and were quartered in Rosia Barracks, with smaller numbers at Europa Pass and Buena Vista. Rosia Barracks was adjacent to the Naval Victualling station at Rosia Bay, and had been a warehouse consisting “of one stone building of two stories and one of wood of the same height” before being converted into barracks specially for the arrival of the 4th WIR in 1817. The area around Rosia was acknowledged to be one of the least healthy parts of Gibraltar, which is perhaps why the regiment was quartered there. By summer 1817 four companies were moved to occupy Cooperage Barracks in the town (part of the Casemates barracks). There is almost no information on the duties the men of the 4th WIR were required to perform while in Gibraltar, though one might reasonably expect them to have undertaken sentry duty and manned defensive positions. Some of the soldiers had families with them: 75 women and 60 children arrived with the regiment in 1817. Regimental court martial records also reveal that some men stole from each other and from the regimental supplies, others drank or gambled too much, failed to turn up for duty on time, or got into arguments with their superior officers. The court martial records of white regiments are full of similar minor offences and nearly everyone was punished by a set number of lashes up to a maximum of 300. By far the most serious case was that of Private Richard Greenville, convicted of the murder of a fellow soldier. Greenville's death sentence was commuted by the Governor, most probably because he was only 17 or 18 years old at the time, and he was discharged and transported back to the West Indies.

The soldiers of the 4th WIR complained of the cold as soon as they arrived. Coming from a Caribbean climate where temperatures rarely dropped below 20 degrees Celsius, even at night, Gibraltar in late February was a shock. For long periods a ‘cold easterly’ wind accentuated the difference between tropical and temperate climates to men dressed “according to the West India fashion”. Extra clothing was distributed, “to an extent that would have been burthensome to others.”

If the hope had been that African soldiers would prove more robust than their European counterparts in Gibraltar it was quickly dashed. The men fell ill in large numbers, not from fever but from a variety of chest complaints, the most serious of which was consumption, or tuberculosis. On 26 May Major Nixon reported that 74 of the men were sick, while a further 65 were ‘invalids.’ Sixteen soldiers had already died in the 10 weeks since the regiment arrived. Physicians who had served in Gibraltar were well aware of the high incidence of pulmonary complaintsin the garrison. John Hennen, who was stationed in Gibraltar in 1809 and 1810, described “pulmonary affections” as the “true epidemic of the rock.”

By the end of 1817 the impact of the move to Gibraltar on the health of the men of the 4th WIR was becoming clear to all. The number of sick had declined to 43 but the number of ‘invalids’ – men who would never return to soldiering had climbed to 112. In early January 1818 sixty-seven of these ‘invalids’ boarded a transport ship for Barbados. During 1818 the number of sick gradually declined, but the death toll continued to mount, reaching 75 in December 1817. Most died of lung complaints: tuberculosis spreads easily via coughing in poorly ventilated spaces containing large numbers of people. Gibraltar's barracks easily met this criteria. When the regiment finally left Gibraltar on March 9th 1819, heading for disbandment in Sierra Leone, 120 soldiers had perished.Thirteen sick men were left behind in Gibraltar, to be absorbed into the white regiments when, or if, they recovered. There is no memorial to the men of the 4th WIR who served in Gibraltar. The dead might have been buried in Witham’s cemetery, the closest to Rosia Barracks, but there are no gravestones to confirm it. Costly stone memorials would have been far beyond the means of private soldiers. The only evidence the regiment was ever in Gibraltar lies in obscure files in the National Archives in London. Yet the story of the 4th WIR in Gibraltar is a reminder that for most of the nineteenth century black soldiers played a important part in the expansion and defence of the British Empire. The remaining West India Regiments would go on to serve in the West Indies, central and south America and in Africa.