Part of the project will address visual images of the West India Regiment, such as those held in the Anne S.K. Brown Military Collection at Brown University Library in Providence, RI. This is the ‘foremost American collection of material devoted to the history and iconography of soldiers and soldiering, and...one of the world’s largest collections devoted to the study of military and naval uniforms’ (http://library.brown.edu/collections/askb/intro.php). Its curator, Peter Harrington, has been very helpful and kindly gave us permission to use one of the collection’s images in our promotional materials. This is a ‘View in the town of Belize...taken from Fort George’ (1848), one of a pair of colour lithographs by Andrew Baynlun (https://repository.library.brown.edu/studio/item/bdr:241751/). It depicts the harbour in the British Central American colony of Belize (known as British Honduras from 1862 to 1973, when it reverted to the name Belize), with soldiers from a detachment of the 1st West India Regiment in the foreground. We’ve been using the soldier standing to attention on the far left as the logo for ASUA, but the two figures in the centre really intrigue me, particularly how the soldier points down at the civilian who crouches next to him. For me, this arrangement captures the superiority felt by West India Regiment soldiers over other people of African descent, perhaps on account of the smart uniform, relative prosperity and sense of purpose that stemmed from military service. For example, John Lloyd Stephens (1805-52), an American explorer and diplomat who visited Belize in 1839, wrote that the soldiers ‘carry themselves proudly, call themselves the “Queen’s Gentlemen,” and look down with contempt’ upon the civilians. Such self-regard and sense of difference from the local population were encouraged by the military authorities. After all, the last thing the British wanted was for their soldiers to identify with the people who they helped to pacify and govern. These themes of military self-identity, relations with non-military populations, and how visual images conveyed such ideas will be important elements of our research.

Collaborating with the British Library 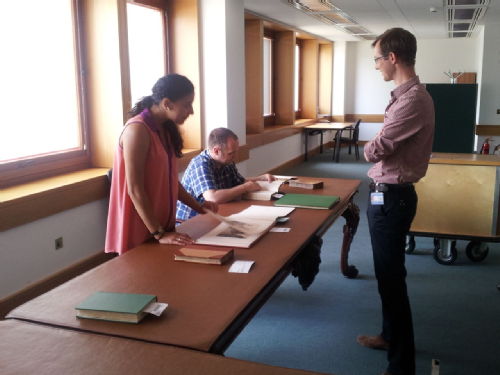 Although the "Africa's Sons Under Arms" doesn’t officially start until October, most of the team gathered today at the British Library - Warwick's institutional partner for this project - where there was plenty of good advice on hand. We discussed databases and digitisation with Aquiles Brayner (Digital Curator) and heard about the presence of West Indian materials among the India Office Records from Margaret Makepeace (Senior Archivist). We also met with Carole Holden and Matt Shaw, part of the BL’s curatorial team for the Americas and Australasian collections, who came to Warwick two summers ago when we started to make our original plans to work on the West India Regiments. Their colleague Beth Cooper (Curator for Latin American Studies) was there too and it was good to hear that there's lots of potential for scholarly synergies between a collaborative PhD that she will be co-supervising with Richard Huzzey at Liverpool University and the PhD students attached to our project. Indeed, joining the project team for the first time today was Melissa Bennett who will be starting a PhD on ‘Picturing the West India Regiments in an Age of Unrest, Civil War and Tourism, c.1850-1914’ in autumn, working with me and Phil Hatfield. The team also met with Ria Bartlett (‎Learning Programmes Manager) who heads the BL's Learning Team. They run visits to the Library for school children and workshops for teachers. Both kinds of educational outreach are central to the "Africa's Sons Under Arms" project and the Learning Team will play a crucial role when we engage with schools in London and the Midlands. Indeed, Ria will be joining the project’s Advisory Board. We also started making plans for a couple of launch events for the project, one at Warwick in autumn and something more substantial at the BL in the New Year...

The democratisation of scholarship (or the wonder of google books)

Access to primary materials is one of the major challenges facing the academic historian. Rare printed books and original manuscripts are normally housed in archives or major libraries and getting access to them tends to privilege either the local (those who live close to the repository) or the well-funded (who can afford to travel). This has been true ever since history emerged as an academic discipline but it is gradually changing. Firstly some primary materials (particularly newspapers) were microfilmed and made available for purchase. A little later CD roms were made of some data (such as the census) and again made available for purchase. Then the internet revolution began to impact academia and large swathes of primary materials were digitised by Readex and Gale, among others, and sold to universities as a de facto research library. The impact of collections such as Early English Books or Eighteenth-Century Collections Online have been enormous, but they are only available to subscribing institutions. No UK university has subscriptions to every online collection of books or newspapers. This is where google books comes in. It is by far the largest of the digitial collections of books available, currently more than 30 million are online, and a large number of them are available for free download. This is a particular boon for those working on the nineteenth century since current subscription-only collections are patchy for the nineteenth century, yet the materials are out of copyright so can be made freely available. For a research project like ASUA google books is a goldmine. One example will suffice. My strand of ASUA deals uses nineteenth-century medical journals where physicians would report on disease characteristics and treatments. There were many such journals published and the originals are held in various libraries and consulting them would normally involve a journey from Warwick to the British Library in London, or even to the Library of Congress in Washington DC. A large portion, however, have been digitised by google and are freely availalbe online. Thirteen of the sixteen volumes of the Southern Medical and Surgical Journal published before 1860 are there for free download. Countless other medical journals published in London, Edinburgh, New Orleans, New York, Philadelphia and Baltimore have also been digitised. Not only has this saved me an enormous amount of time, it has made scholarship far more democratic than it ever was before. Anyone can access these books, download them, put them on a kindle or a memory stick and take them anywhere. We are surely not that far from having virtually all printed books online, and what was once a 'Star Trek Technology' - whereby the sum of human knowledge was essentially portable - gets nearer every day. For my part of ASUA I will still need to visit archives, mainly for manuscript materials and also to read some of the volumes not yet scanned, but many people could now undertake research projects without ever leaving home. As for me? I can now read some of these vital texts in the garden, enjoying the Warwickshire sunshine.

Update: I had forgotten that the internet archive (archive.org) also has a mass of digitised books, including links to google books content, so it is definitely worth searching that as well. I found the missing three volumes of the Southern Medical and Surgical Journal there, as well as lots more.