Another Sunday evening, another trip to the Skydome for the Third Floor Film Circle. This is the second recent adaptation of a Frank Miller graphic novel, following 2005’s Sin City. It already resides in the imdb top 250 films. It relates the story of the battle of Thermoplyae in 480BC, in which Spartan king Leonidas (Gerard Butler, Phantom of the Opera), and 300 of his men fight to the last man against the million-strong Persian army of Xerxes.

It’s beautifully shot, and very stylised. The slow motion battle cinematography is excellent and captures painfully gory battle-related moments very well. It can’t however mask the fact that this film is essentially one set-piece battle that would last 30 minutes in any other film, stretched to breaking point. The film is less than 2 hours long yet seemed far far longer than that. People were audibly bored in the audience.

It also falls between three stools; it can’t decide whether it wants to be Gladiator, Troy, or Lord Of The Rings: The Two Towers. It echoes all three, yet doesn’t come near any of them (and given how appalling Troy was, that’s saying something). The central plot device of men backed into narrow chasm while hopelessly outnumbered is much better done as the battle of Helm’s Deep in LOTR:TT, and Zulu for that matter. And the build up to the battle itself is very poorly done. The use of dream-like sequences in wheat fields and political corruption in the senate is lifted straight from Gladiator. The wizened, leprous old priests at the beginning bear more than a passing resemblance to Emperor Palpatine in Star Wars. And the deformed Spartan ‘traitor’....Gollum anyone? And the giant “no-we-didn’t-steal-them-from-Mordor-honest-guv” elephants…

And then there’s the dialogue. Portentous, ominous, grandiose. David ‘Faramir’ Wenham, as the narrator is the principal culprit. However Leonidas is not innocent either. Either being verbose, or shouting lots. There’s a touch of the Flash Gordon in there somewhere, from the very camp Xerxes, to the Persian Immortal warriors; separated at birth from Flash Gordon’s Klytus. Xerxes might be very tall and have more bling than gangsta rapper. But scary? No.

One of our number says I’m being unduly harsh, that it’s not worth trying to over analyse and think about movies like this. But this is a film stretched far beyond the material available. It might be pretty to look at, but there’s not much there otherwise. Lots of the iconography of the film has been done better elsewhere in better films. This was a bit of a let down. Top 250 films of all time? Pffft!

Life is full of firsts

Yes, that’s right. I paid to watch a Bond film for the first time in my life. I’d just got so fed up of the high-camp and ridiculous quippery, reaching its apotheosis (or is that nadir?) in Roger Moore, appalling one-line jokes, femmes fatale with silly names, and the batty turns by Q in his various guises as the mad English boffin. Seemingly, the filmmakers had got fed up with it too.

In effect, what happens here to Bond is what to happened Tom Clancy’s Jack Ryan in 2002’s The Sum Of All Fears, i.e. a trip back to his early, younger days. And the effect is better, as Daniel Craig (perhaps best known for the stellar BBC drama Our Friends In The North) has considerably more acting ability than Ben Affleck showed in the latter film

It’s interesting to see Bond minus most of the gadgets (no invisible cars here), and the film does lean on the Bourne Identity/Supremacy quite a bit, but given how good those two films were that’s not a bad thing. In fact it’s probably fair to say the success of those two films gave this franchise a much needed kick in the pants. Most of the staple Bond-isms that are taken for granted are neatly set up… a crying shame what happens to his car, but such is the life of an international MI6 agent.

The main villain, Le Chiffre, is vaguely creepy for a change (Die Another Day and Tomorrow Never Dies anyone?), and there’s an excellent turn from Eva Green as Vesper Lynd. Good support too from the always waspish Judi Dench as M, Giancarlo Giannini (Hannibal) and Jeffrey Wright (The Manchurian Candidate, Syriana). The only grumble is that at 144 minutes it’s probably 15 minutes too long. But that’s a minor complaint.

Bad Film of the Week 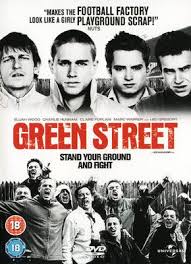 It’s a dangerous business, Mr. Frodo, going out your door. You step onto the road, and if you don’t keep your feet, there’s no knowing where you might be swept off to.

Into rubbish films about football hooligans. Given my DVD collection stretches to about 150 films, I should have blogged some more about films before now. I am proud to say I don’t own this film. But the benefits of Sky Movies through being home for the weekend offer the chance to catch up on some new films.

I’d often been staggered in bookshops how much of the ‘hoolie-lit’ genre there was- there’s a whole shelf of it in Ottakar’s in the middle of Coventry. It’s a profitable line to be in apparently. And so it’s inevitably inevitable some of them will make it to the big screen.

So in a nutshell: Harvard student (Elijah Wood) takes the rap for his roommate’s drug taking. He’s expelled and moves to London (where his sister lives). Except his sister is married to the (now retired) head of a crew of West Ham football hooligans. Younger brother of said crew-head takes Wood to matches and he is sucked into a world of hooliganism.

Where to begin? Well, firstly in 16 years of regular match-attendance I have seen 2 instances of crowd trouble in that time. Yet the filmmakers would have you believe crowd trouble is commonplace and all the hoolies go to games. They don’t. Football grounds are crawling with police and CCTV. Burberry-clad chav hoolie-wannabees go to games.

The film was riddled with ridiculous errors. One trip to a match shows West Ham playing some team or other. One member of the crew dressses up in a steward’s jacket and walks over to the away support, taunting them “dirty northern [expletive deleted]”. The team they are playing? Gillingham. Yes, that well known Northern team. They get on a train to Manchester. A Great Western Train! They parade down the street singing their songs in full view of the local plod!

We are supposed to believe that one ruck on the way home instantly converts Wood to the ways of violence. Eventually West Ham are drawn against Millwall in the quarter-final of the FA Cup. There is betrayal, wives walking out and redemption, all with a hooligan related theme. It’s risible. With a capital R. The film gets 1 star solely for random-English-TVpeople-spotting potential

I feel sorry for Elijah Wood. It must be hard for him, at the age of 25 knowing he’ll never be in a film anywhere near as successful (either critically or at the box office) as The Lord Of The Rings for the rest of his life. He has obviously decided to take on ‘interesting’ scripts in a bid to get a bit of serious acting credibility. This one isn’t interesting. It’s a reeking, steaming pile of horse manure 10 feet high.

If you ever wondered…

…what really happened to Beagle 2 then next July we'll find out!

What a curious film trailer. Would a film really build itself on a plot device that really is so cheesy as to be laughable? At least Professor Colin Pillinger would get to know that it did actually get to Mars. Maybe it's just an advert that will stand entirely separately

I've been quite curious about this film for a while, given the number of said toys i had when I was little (long ago in the mists of time). And the release date and trailer leads me to the following conclusion….

Oh and it's directed by Michael Armageddon/Pearl Harbor Bay. Give it a wide berth!