Momentum is the key

This has been a funny week. All the way to Southampton and back by the afternoon on Monday, Watford and the Premier League on Tuesday, followed by having the stitches in my thumb removed today.

So I was back in the lab and very harassed (as per usual), trying to pick up the pieces having not done anything in a week; I can do a lot in one of my weeks. After a couple of days of effort, not much was working, and the mood was getting ugly. But this afternoon, the first crystal structure came back from Southampton, probably explaining the weird NMR, and also throwing light on some similar results which I had down as ‘spurious’ (and was skirting around) but can now similarly explain why.

And the rest of the afternoon has been the same way. Things making sense. People ask me why i work such long days. Chemical research is like pushing a huge boulder up a hill. Lots of effort required to get it moving, then once it gets to the top momentum builds. You get out what you put in…

There are other ways of getting out of changing the glovebox cylinder than having to go to A + E. Four stitches and a very sore hand later, I am confined to desk duty for the rest of the week. And yes, those of a superstitious nature will see what day it happened on. Tis but a scratch

It made me laugh

Here I am at the end of a very long week. After getting back into things, I’d had 8 really good days in a row; doing new chemistry, and continuing to heroically unravel the tangled mess that others have left.

Along the way I’ve seen just why Nobel Prizes are given out (in order to make lab minions like me have a slightly easier life), but it couldn’t last. Today has been rubbish, back to the times when I had the Midas touch in reverse.

So to end the week, a joke I have seen on the interweb this week. Tis not very good perhaps, but it made me laugh.

Are we sitting comfortably?

...I love it when a plan comes together!

And plan F to boot!

No affording the Ti paper as “THE PAPER OF DOOM MK. II”, which is probably just as well considering the boss man’s question at lunchtime of “which paper’s next then?”

The PAPER OF DOOM, a.k.a. Gott, Clarkson and Scott, om061087l has finally been submitted…

In the relevant folder in my ‘Papers’ folder, there are 15 (FIFTEEN) separate versions of it!

Permission to drink much beer tomorrow?

So another long evening ironing out the creases in the Paper of Doom. Once again, it being sent to an American journal required me spellchecking it to make sure everything was spelt correctly.

And so MS Word had it’s fun again. Here are some more chemical terms and their alternative as suggested by Word. Those in the know will appreciate one or two

biaryl = beery. Oh yes indeed! This paper would drive anyone to drink

homochiral = homicidal. I say nothing

I’ve already written this once today, but the blogbuilder editor page ate it, so I must type it out all over again…

I’ve just played another match for the (today, anyway) pretty damn good Steaua ButylEster, and have come over all nostalgic for my previous life in Leeds.

In the department there, there used to be a mixed summer football tournament among postgraduates/postdocs/staff. It was always played (unless you were playing KFC) in a good spirit, and was generally fun, especially if you had a PhD supervisor who swore the place down as he spaffed another ‘shot’ into the basketball backboard.

The problem was numbers. Only having 5 players (the Inorganic section, from whom Real Complex were comprised) always meant that teams with bigger squads would steamroller us. I once remember conceding 15 in a 30 minute match. In the 2000 and 2001 campaigns, we had a combined record of P14 W1 D1 L12. Unsurprisingly, we didn’t make the playoffs.

In 2002, the Inorganic section had been swollen by the arrival of a new Prof from Australia, and many more PhDs signing for other groups in his wake. Suddenly there was a pool of players to choose from. Joining stalwart heroes Gott, Furtado, Camm and McGowan were striker Clark, midfield enforcers Dalgarno and Burdsall, and the French international stars Elhaik (combustible temper, deadly left foot) and Renard. Burdsall and Renard shared the ‘female on the pitch at all times’ duties.

What followed in the 2002 season would be dismissed by Hollywood producers as fanciful and far fetched, as zeroes went to heroes. Right from the outset, a stunning 4-0 demolition of well-fancied Queens Park Rayners, we shocked everyone with our performances, ending up unbeaten in the group stages. Following a semi-final win over 2001 winners The Enolizers (a game punctuated by that rarest of rare things, a Furtado1 goal), we faced hot favourites, the free-scoring River Hotplate.

If you’re thinking Hollywood sporting films, you’ll be thinking the denouement is along the lines of The Mighty Ducks, or Remember The Titans. True to form, we were in front 3 times in the final, and with the 3rd goal coming 2 minutes from time, everything was set for a fairytale finish. Then Oliver Stone took the directors chair, tore up the script, and went all Any Given Sunday. With literally seconds left, a stray pass let Hotplate in to make it 3-3, and with two of our best players off the pitch resting, the ensuing penalty shootout was lost 3-1.

It was great fun to play in (and very funny to watch your PhD bosses’ wildly erratic shooting), a personal highlight being the none-shall-pass performance against the KFC striker who could only score by cheating from a free kick with a moving ball (yes, 4 years later I am still bitter2). The look on his face when I contemptuously didn’t move for one of his long shots and it hit the post and flew into my hands was priceless…..

1 Whose shooting could almost be described as Haggart-esque

2 The referee’s response was “it’s the last minute, does it really matter?” Yes it does!

A busy day, one way or another, but its come to something of an abrupt halt. So in no particular order:

1) Why is it that I only get crystals suitable for the X-ray machine when either a) some part of the machine is broken, or b) I don’t want single crystals but material suitable for an elemental analysis? Why is chemistry such a capricious mistress?

2) It’s nice to have a car again. No having to get on the number 12 till Thursday evening. Very nice to leave the flat at 8.45 am and still be at work for 9

3) Related to 2), why do people drive like idiots on the M1 (or indeed any motorway) in the rain? Those of us that only drive infrequently, and even less so on a motorway at night don’t like cars diving from the 3rd lane to the 1st right in front of you just because they have (almost) missed their junction.

5) Why can’t I watch football like Arsenal played yesterday afternoon instead? Not a long, hopeful punt downfield (goalkeeper excepted) all match. Everything on the floor.

6) The Mike Riley Award for Refereeing Incompetence this week goes to the Premier League refereeing corps as a whole. Booking two Chelsea players for celebrating goals. Blatant penalties for either side in the Charlton-Watford game not given. Sheffield United boss Neil Warnock (quite rightly, for once) being thoroughly aggrieved at Everton.

Andy Johnson was described as “being very adept at winning penalties” on MOTD2 last night. If he was foreign he’d be slated left right and centre. Why do we continue to look the other way when they’re English? Football is a contact sport. Contact in the penalty area and the award of a foul do not necessarily go hand in hand. Same goes for the Villa-Fulham game.

And last but by no means least, Mr. Mike Dean. My less-than-well-disposed view of him may be somewhat coloured by a game in the past but he is an incompetent of the highest order. Not a good weekend for the men in black.

Oh and if you think it’s solely confined to the top division, take a bow the linesman with the yellow flag at the Bradford-Scunthorpe game on Saturday for giving a goal kick to the visitors when the ball actually hit the corner flag and went out for a Bradford throw. He was running upfield not even looking to see where the ball went! 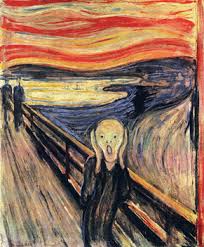 A long night at work

Here I am in the lab for a long old evening. More fool me for starting a sublimation at 4.35 pm I suppose. But very very necessary. Lets see how the evening unfolds…

6.30 pm. Turn sublimation temperature up. Dicing with side product bumping across as well (no, Stu, it’s not that prep). Resign myself to listening to Bradford game at Doncaster on internet. At work.

7.15 pm. Team news ‘online at 7 pm’ has finally been posted. City unchanged. Time to go and get some food from Costcutters.

7.52 pm. Johnson flies past his man again. Give the man a new contract now!

8.09 pm. Deano buries another header from a Bridge-Wilkinson cross. 2-0. If scoring in the first minute was scary, defending a 2-0 lead for 65 minutes is even worse…

8.24 pm. City should have stonewall penalty. Home fans are getting agitated…booooooo…come on City, finish the game!

8.29 pm. Doncaster inevitably pull one back moments before half-time. 2-1. Their first goal for 301 minutes…!

8.34 pm. Saved by the half-time whistle. Doncaster had really pushed hard in the second 20 minutes of the first half. I know I’ll regret this at some point later in the evening/season, but Huddersfield are apparently getting a pasting at Tranmere. On a chemistry note, the sublimation is still going. But I think it’s nearly finished…

8.54 pm. Dodgy-free kick given. Wetherall booked for protesting, and the ball is forced home. 2-2. Arse! Last season all over again!

9.00 pm. Doncaster rampant. All Bradford’s prominent players have disappeared. Come on!! Why did i make fun of Huddersfield?

9.09 pm. Phew. Doncaster goal disallowed from YET ANOTHER set piece. A 6’6” keeper and two 6 foot centrebacks and we’re losing everything in the air. How? Why?

9.25 pm. Parker and Colbeck on for Edghill and Holmes. Then…home skipper and centreback Graham Lee pulls Windass down, through on goal. Red card and home side down to 10. 8 minutes left…

9.29 pm. Rovers sacrifice striker for defender, signalling their intentions. The third game in a row City are playing 10 men. JJ is terrorising the Rovers defence down the City left now. Where has he been for 35 minutes?

9.34 pm. 4 minutes stoppage time to play. End-to-end now. In and amongst all this, the sublimation has finished.