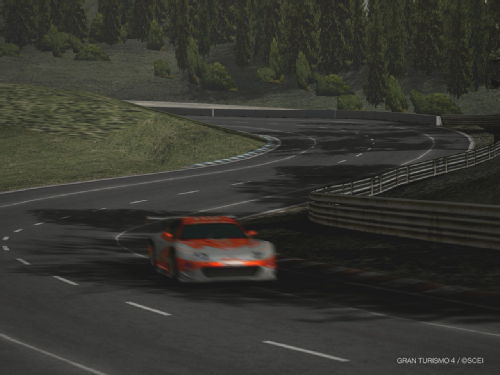 Well, all things going well it would seem I'm representing the UK at this year's Electronic Sports World Cup at Gran Turismo 4 in Paris.

The downsides so far… the timing. The whole competition is a 5 day event in Paris between the the 28th June and the 2nd July, meaning I have only 13 days to practice after the end of my exams. As my newly formed GT4 Gallery might suggest, I've already started practicing, perhaps unwisely, but if I want to stand any chance of getting in the top 8, I need as much time as possible. The rules are out, meaning I know what cars and tracks are available, so it's just a matter of finding out which tyre strategy is best, and then getting insanely consistent.

As luck would have it, my GT4 disk is rather scratched, meaning only a handful of the circuits load at the moment (until I get it de–scratchified), so most of my practice has been round El Capitan in the Supra (as seen right). The Nurburgring is just such a demanding circuit (6mins 45 a lap, 3 laps) that it might very well eat most of my practice time, so I've been taking the slightly slower Peugeot 206 round the track to get used to it. After a few laps it became clear that breaking the magic 10 minute barrier was possible, and on my 5th lap, (50 minutes of racing) I got 9:59:514, what a relief. It took a fair bit of thrashing and "moments" involving car on barrier action, but I got there.

It really is going to take all of my restraint not to keep practicing, but I know revision must come first, roll on "Data Structures and Algorithms" on June 14th…