Due to the impending referenda in France & The Netherlands, thought I'd conduct an informal poll. Two simple questions.

1)Have you read the EU Constitution?
2)Would you vote for it?

Just wrote a long entry on how badly done the organisation of our final year project choices are supposed to be, and the blog system decided to change it when I clicked Publish so that it contained the text of the last comment I wrote instead.

Might repost it later if I can be bothered to re-write it all.

Everyone else is doing it, why shouldn't we?

total volume of music files on my computer
Erm..a little complex, as it's kind of spread out over 3 computers, desktop, laptop & mums desktop. A rough guess is something like 25Gb, roughly 5300–5500 tracks.

the last cd i bought was
Strung Out-Exile In Oblivion. Great album from a little known Californian punk band. Thanks to Antony for introducing me to their music.

song playing right now
Led Zeppelin-Stairway to Heaven. Nice classic track
For my last song, and most played, check out Audioscrobbler where I have an account
There's even a Warwick group on there

five songs i listen to a lot, or that mean a lot to me
hmmm, that's just nasty. Only 5!

Memories of last summer on the beach, just chilling out with the sunset.

For a punk band, these guys have amazing lyrics, and this song is just brilliant.

Mainly due to Nick buying decks and not having a huge amount of vinyl. This is a brilliant track, with a very sweet bassline

Sorry to lose the tough-guy image that I've spent all these years cultivating, but this is a beautiful song and her voice is just haunting. She should have played it when we saw her though.

the five people i'm passing the baton onto
Anyone who reads it and can be bothered.
Ben
Swede
Adrian-Put something on your blog
John

Will probably do a proper entry later if I can be bothered. However, as I have no urgent work to be doing, I think Kelseys is calling.

Ok then. Been browsing the blogs for last night and this morning. Generally just look at older entries. However, decided to view by date. Clicked yesterdays date and for some reason, as well as the blogs, I get a small picture of a duck with a pint of beer on its head,

which scrolls down the page as I do so that it stays in the same place. 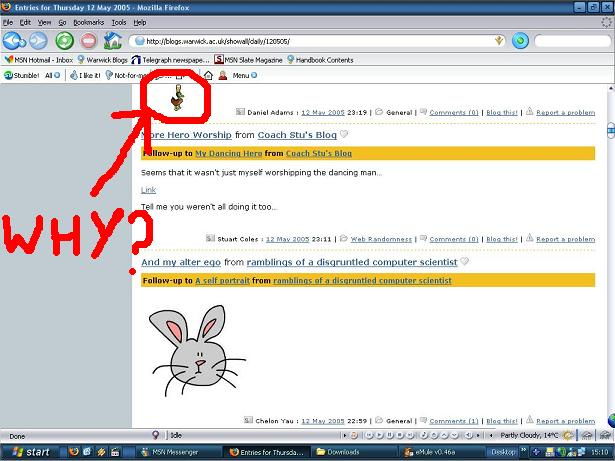 This appears on 2 different computers. Strange.

Anyone know? If it does I may have some hope of passing my Russian oral tomorrow, since i think that's the only way I'm going to learn half this stuff. The book that the course kind of follows has a CD which comes with it. If I play it through the night while I'm asleep, or in the early lecture tomorrow when I'm asleep, will I actually take any of it in?

I hate these people

So an EU commissioner links rejection of the EU constitution to risking another Holocaust by clinging to "nationalistic pride". Hmmm. Is it just me, or was the perpetrator of the Holocaust the one who was trying to build a single European state under his own flag?

This woman's (Margot Wallstrom) the "vice-president of the commission for institutional relations" and was speaking in a former "Jewish ghetto" in the Czech Republic. Hmm, inciting fear to try and drag people with you. Isn't that rather reminiscent of the tactics that the EU absolutely hated when Bush tried it on them, but it's perfectly fine for them to use it on their own citizens. And surely someone ought to find a better job for this woman? Isn't the Czech Republic a bad choice for giving this speech? The Czechs are probably slightly more familiar with a tyranny that subjugates nationalism for support of the Union/European Project/Motherland than a Swedish commissioner.

"Her fellow commissioners also issued a joint declaration, stating that EU citizens should pay tribute to the dead of the Second World War by voting Yes to the draft constitution for Europe." I'm sorry, but I think these people are actually scum, willing to jump on any bandwagon or use any event to ensure the continuation of their gravy train. After all, they can, and did, veto the auditing of their own expenses. They don't want this thing to end, they get too many perks out of it.

"The commissioners also gave the EU sole credit for ending the Cold War, making no mention of the role of Nato and the United States." Should people with such a lack of understanding (or who care so little about the truth, either way) of history really be the ones we entrust to make our laws?

Those who cannot remember the past are condemned to repeat it.

…Hopefully enough to give me some motivation to finish this damn formal report (S1 for anyone who gives a damn, or feels like helping) The main problem I have is that the word limit is ridiculously low for what we're expected to put in. I've written one of these before, but thanks to a screw-up on the website, had a limit of 5000 words rather than this one's 3500.

Let's see-Experiment is 5 sections, 3500 word/5 sections=700 words per section. Seem a little low? This is then made worse by the fact that we have to write so much about each bloody section and can't lay it out in the most sensible way! I now have 391 words to write the longest results section, the discussion, and the conclusion. Whoopee!

Added to the fact that my results appear to be different to what they were when I wrote the lab book and this isn't fun. I'm also not helped by the fact that, once again, the marker for the lab book appears to have no capacity to retain information, so the comments aren't too handy. If I explain how I derive something, then use that result on the next bloody page, i shouldn't have to then put where it comes from, it's obvious! You read it 4 lines ago!

Than again, this one was a lot, lot better than the last lab book, where a table of values headed "Measured values taken from lab script" and the markers comment was "Method??"

Method!? What! Well, I opened the book, read the values and wrote them down. What the hell do you expect me to say to this. For once, open your eyes and read the damn thing!

The same experiment: "readings were taken and are shown below" was met with "What readings?" Um…the ones in the table below perhaps?! Do the physics department actually employ monkeys to mark these things?

On a slightly more positive, and less ranting note, have managed to introduce the Germans to Spaced, with the result that we watched all of Series 1 on Saturday, and all of Series 2 yesterday. This wasn't intentional, we just kind of never got round to turning it off. I apologise to everyone else who knows me, as I may well be sprinkling conversations with Spaced quotes for a couple of days. (As opposed to the usual South Park, Family Guy, Invader Zim mix) Speaking of which, where's the new Family Guy, it should be out now? Hmmm.

Ah, new Simpsons is finished though. As is my, very nice, sandwich. Should probably get back to this bloody report. It's made worse by the fact that I can't even go out and get drunk when it's done, since I have to learn Russian for Thursday. Aaaaagh!

.. To the Link Cup Champions for their loss against the Lumberjacks (2:1) in the five-a-side cup final this morning. And good luck against Three Trees in the Champions League Final on Friday.

The only words I can come up with to even remotely express how great, how majestic, and just superbly wonderful Faithless were last night. We went to the NIA, which none of us had been to before, seemed quite a nice venue, without the ridiculous lines for things of most places.

The opening act, Infadels, were ok, some nice beats, but they really need to decide what style they're going for. Warming the bass player up before the gig starts could be an idea too. He was practically asleep for the first half of their set, then woke up and was suddenly the best thing in the band.

Half hour or so sat around after Infadels finished, then Faithless come on. They get a much better response, just playing an instrumental track. Then Maxi Jazz comes on. Wow. I've never seen a crowd so completely in the palm of someone's hand before he's even said a word. They start off, and after 3 tracks, not the usual "save the best tracks for the encore", we had Insomnia. Incredible. The crowd went absolutely nuts.

Faithless kept their big, crowd-pleasing songs spread out through the set, which made it rather more even than your usual live show, although it made sure that nobody dared go to the loo.

One small quibble, the back-up singer, can't remember his name, is good, but he's no Maxi, and whenever he was on there was a slight feeling of "You're not bad, but not who we came to see". Sorry mate, but not quite there yet.

Brilliant show, but was kind of short, starting 7:30 ish and finishing about 10:45, which sounds ok, but Faithless didn't actually start till 9.

Also, getting back to Leam at 11 on a tuesday night is kind of a hassle, especially when none of you really know where you're meant to be going and you have 2 times for the last train (both were right, just one was from New Street and one from Moor Street.) Why exactly does Birmingham need 3 major stations in the centre? Especially when New Street is actually HUGE!

After an after party, kind of, ended up getting home at 9 this morning. Now have to somehow find the time to eat, sleep, watch the football tonight, do 101,000,000 things around Leam, and do some work for the Russian exam tomorrow (or at least learn how to use the dictionary).

Well, maths exam yesterday was pretty horrible. Feel like I've probably failed maths 1, though maths 2 wasn't too horrendous. Oh yeah, and can any physicists who read this e-mail Rubens or Ulrika about how bad the QM exam was-who knows, the SSLC may be useful.

End of exams led to drinking, starting at 12, followed by picking up and then going back home to have a bbq. This then led to Wetherspoons (unfortunately-don't really like the place, the beer's cheap but the atmosphere's kind of crap) followed by Mirage. Can't really remember much of it now, but seemed like a good night at the time. Contributed to the death of my digestive system with help from Viallis-oh dear. Then tried to get the new South Park. So Ben turned his connection off half way through. Download stops. Damn

Now have a couple of days off before having to learn Russian. Should probably buy a dictionary at some point before the two hour translation paper. Then will have to revise for a Thursday exam the day after seeing Fathless in Brum. Dammit, why are things trying to make me fail the year?