Well, that was a shit weekend.
What happened? Two days trying to figure out what I did or said that I shouldn't have, or didn't do or say that I should, and my mind just goes round in circles….
I miss you, and wish there was something I could do to get you back, but I just don't know what it is. So confused about the whole thing, it all seemed fine then suddenly it's gone, and I don't know what to do.

Follow-up to Dammit, Why are we back at uni so early? from Anyone Can Post On The Internet

You really have to love the health service in this country. Especially our local hospital in Cornwall. My mother has managed to have her operation (which she's been waiting for for roughly 18 years) postponed twice at short notice but that's nothing compared to today.

The girl who I was writing about previously, and have since visited again to find that we now like each other even more, was supposed to be having an operation today. This was cancelled all of, ooooh….half an hour before it should have begun, well after she had been sedated. I managed to spend all day worrying, especially after a phone call when she'd first been sedated. Then I have a very upset girl who has been waiting for this operation for quite a while crying to me down the phone in a very sedated state.

Dammit, Why are we back at uni so early?

I have to admit, I'm not that bothered about being here for 10 weeks, my main problem is that after this holiday, I would really have liked to stay in Cornwall for a few more days.

As with many problems for men, this was caused by a woman. Over Christmas I ended up seeing a girl who I really get on with, am really attracted to and enjoy spending time with. And vice versa. But then I have to come back here, and now I miss her a ridiculous amount, and am so annoyed that I'm dragged away. I've only known her since the day I went down to Cornwall, so about 3 weeks, but I've really started to feel for her. Having been dragged up here, I could really do with it being worthwhile, but my timetable for the next 5 weeks is ridiculously slack, and I end up with 2 free days a week, so I'm starting to question just how much it's worth me being here, especially when I'd much rather be somewhere else.
Don't get me wrong, I like being up here and enjoy meeting up with people again and getting back into the usual drunken routine, but I could definitely have done with a couple more weeks down there.

Everyone seemed to be doing end of term entries, so I looked on here and realised I haven't actually written anything this term….

Spent summer getting very wrecked most of the time, ending with a large outdoor party with a very large fire.

Came back to new flat with new housemates, Nick, Adrian and Chris. Nice flat, right in the middle of town.

Had parties, mainly ignored work. Did as I promised and bought decks for the house so now have more vinyl.

Did a bit of work, finished term with a party, everyone drifted off, and now I'm here with a bottle of wine and a beer…..

A summary of 6 months of my life in 4 lines. That's got to be kind of bad.

How many people can you fit into one standard shower?

Based on last night, I'd say 8.
It's cold when you go outside afterwards though. 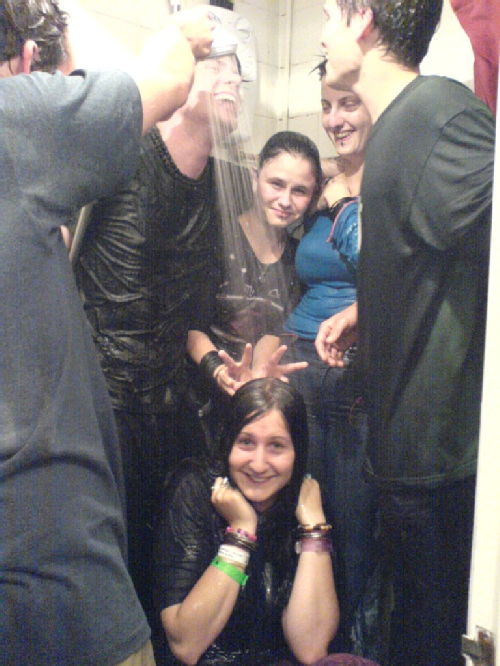 Well, I can remember bits of this. Unfortunately missed the fountain swimming though, as I really, REALLY needed sleep by that point. Mainly due to being staggeringly drunk. And having had 3 hours sleep the night before.
However, was in a good mood for the first time in about a week.

The only thing that is left to say is that it lost me after roughly 15 words. The opening speech of the original is quite famous. Essentially saying that we were being watched by advanced intelligences and suspected nothing. That works, for the end of the 19th century.

2005 however, I'm pretty sure that a fairly large proportion of the planet could quite easily be persuaded that we were being watched, that there is more intelligent life out there, and that it may well be belligerent.

When a film manages to lose your suspension of disbelief that quickly, there's something wrong.

The best part of London getting the Olympics…

…is that it'll wipe the smug grin off Chirac's face after a month of trying to distract attention from the EU referendum result by slagging off Britain (and to a lesser extent, the US).

First he has a go at the British rebate, until it's pointed out that even with it we pay far more than France, and the main reason for it is the CAP, main beneficiary, France.

Second, he says that he'll use the G8 to force America to remove tariffs on textile and food exports. Bush says fine, as soon as the EU does the same. Main advocate of the EU tariffs, France.

Thirdly, he just slags off British food in a chat with Putin and Schroeder. So every major restaurant critic in the Western Hemisphere points out that we have far more diverse and varied cuisine than France, because we're not so protectionist that we automatically assume ours must be the best. Along with wine and cheese, French food's standing has gradually diminished over the years as cheap travel and more disposable income have lead people to be more adventurous in what they eat.

In the same little chat with his buddies, Chirac claims Britain has done nothing for European agriculture except mad cow disease. (Which reminds me, doesn't France still owe us money for the EU fines levied on it over its illegal ban on British beef? Will we be seeing that anytime soon?) Isn't it strange how France, which he must think has done so much, has such an inefficient farming sector that it requires the CAP to prop it up while we get sod all. He also conveniently forgets that most of the basis of modern agriculture was based on British inventions and processes, such as crop rotation.

So after such a nice time slagging us off, he must have been hoping to arrive at the G8 summit, fresh from the Olympic decision in Singapore, victorious showing once the superiority of France. Instead, he'll be arriving to an even wider than usual grin from Tony.

He must be wondering just how much longer it'll be before he's in prison on the fraud charges that only his position and immunity from prosecution keep him safe from. His grip on power is starting to look more and more shaky every day. Especially since the last election was only won with a subtext of "Elect the crook, not the Fascist", which is even more unpalatable than Labours "Vote for us, we're not the Tories".

Hopefully he'll be able to watch the 2012 Olympics from his cell. The guards might be nice and let him have his own TV.

Update:Lovely opinion piece by Boris Johnson in the Telegraph today

Those of you who are devotees of my blog (you know who you are) may remember that way back in March I wrote about a guy online who'd set up a website called SaveToby on which he planned to kill nad eat his pet rabbit if he didn't raise $50,000 by June 30th. Realising that it's now July I thought I'd check out how Toby was doing. Last time I'd checked, probably about a month ago, he'd raised $25,000 and it didn't look good for Toby

The website now says that Toby was a rabbit he found after an attack by an alley cat, not a beloved pet. The deadline has now been put back to November 6th 2006, and the target to 10,000 copies of his book. Currently sold 3,467

By now it seems pretty obvious that this guy has no intention of eating the rabbit, and the biggest risk to its life is old age.

…in the first part of the speech Bush argued quite well that Iraq, as it stands now, is worth a fight. Yes, it was disingenuous and offensive for Bush to stand there and say with a straight face, "Terrorists want to attack our country and kill our citizens, and Iraq is where they are making their stand." After all, terrorists came to Iraq only after Bush invaded it, then failed to secure it, practically inviting jihadists across the region to come perfect their bomb-making talents against the American infidels.

If Bush is actually more intelligent than he is generally given credit for, then this could actually have been seen as a reasonably smart, if Pyrrhic, strategy.

After all, surely it is better for America if all the terrorists are attracted to Iraq, where they attack American military and Iraqi civilian targets, rather than having them living in New Jersey planning attacks on American civilian targets. It may create more terrorists, but America's never been too bothered by terror attacks in other countries. After all, read Bush's quote:

"Terrorists want to attack our country and kill our citizens, and Iraq is where they are making their stand."

So they're making a stand in Iraq as their way of attacking America and American citizens. Kind of handy if you're an American 10,000 miles away.

I'm not saying it's nice, or true, but it made me think.