As an example of level capacity I would like to look at the Indoor Skiing centre. Next to my house I have a Gym, or let's say sports club. It consists of many sections like: Gym, Swimming pool, Sauna, Indoor Skiing centre etc. When developer constructed this centre he created the capacity of the slope. It is 50m wide, 600m long and has difference in height of 80m. Number of air conditioning systems keeps the inside temperature of -5°C. This level of capacity can not be changed and is stable.

Management of this centre can't stop air conditioning if there is only one sportsman inside as snow will melt and it will cost the company much more money to relaunch the centre again. From my point of view here we can review as an example theme parks. While being a student in the university I was working during the summer vocations in Six Flags over Texas theme park in Dallas, TX.

Theme parks has a number of offers like "season pass", family tickets with discounted price.

Let's review the queue design of the roller coaster. This queue is a mix of two designs: single queue and multi queue. The queue starts with the single queue design. This allows to structure the order of people going to the ride. At the closest point to the ride there is a split of the single queue into 10 queues to one trains as it has 10 seat rows. So this multi queue allows to minimise the time and simplify the structure of load. On the other side of the train there are 10 ways out. So load and unload are splitted. This also helps to minimise the time loss.

Here I would like to get back to IBM Global Financing (IGF) process map that I described in Lesson 3 exercise.

Let's assess each step if it adds value from the Lean thinking perspective:

Once again reviewing the process of IGF business flow I can determine that this is rather push mode of work flow than pull one. This means that all existing bottle necks create a number of queues that does not allow the business to flow smoothely. Main reason is the nature of business. As IGF is a captive financing company it highly depends on the demand for the main IBM products (HW, SW, Services) and due to the high fluctuation of the attachement rate the demand for IGF financing is hardly predictable. So IGF mainly use MRP system of inventory management. That means that we have and inventory of available pool of money that we have to put into the market and renew this pool when we reach some critical point.

For this exercise I have chosen the the assembling of personal computers. Every computer is a mix of spare parts like memory, hard drive, processor, video adapter, mother board etc. Let's assume that we assemble two types of desktops: standard type, and special powerful computers for special orders.

First of all we can classify the spare parts by the type of demand. Those for standard type of PCs will have independent demand. At the same time some special powerful 3-D graphic accelerators will have dependent demand which will depend on the number of special orders for this special computers.

For the spare parts for standard type of computers we can use ROP system to reorder them when inventory level reaches some critical point. This system is sufficient enough for such kind of inventory due to the high turnover of such spare parts and low cost of it's purchase.

For the more complex and powerful specific spare parts MRP system should be used. This system should use a complex of statistical information to plan and forecast peak demand for special computers. Besides that MRP should have an access to the information systems of the suppliers to be able to minimise the costs by purchasing higher quantity and using special promotion programs of the supplier. Third dimension of the MRP should be the cost of keeping the inventory. The mixture of these three dimensions will give us the most appropiate procurement policy.

The mentioned above classification can be used in ABC analysis. Let's devide all spare parts into three classes:

Class A: The most often used spare parts like wires, memory etc. The inventory cost is not high. Inventory turnover is high. ROP system should be used.

Class C: Rarely used spare parts like complex 3-D accelerators and powerful video adapters. MRP should be used due to the complex forcasting of demand and procurement planning.

In this lesson exercise I would like to review the integrated supply chain of IBM Global Financing (IBM Credit Corp.) on the world wide level.

IBM Global Financing (IGF) proivdes different types of financing for IBM customers. Among IGF products there are different type of leases and loans, innovative credit line schemes and other. In most of the countries IGF is a part of IBM Corporation local subsidiary, but as far as IGF acts as a bank I would prefer to look at it as an separate finanicng entity.

Taking into consideration all mentioned above I can describe the IGF supply chain as the following: This chain perfectly shows the flow of the IGF product from "raw material" stage (money in the bank) to complicated financial product with number of additional services, options etc.

This chain is well developed and pretty mature so main focus should be on the issues of price of financing, speed and quality of made decisions, additional benefits to standard products.

For this exercise I took a portable audio-player as an example of product.

What are the main customer requirements for the portable players: 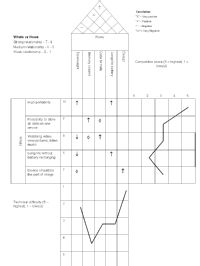 The matrix above provides my estimation of the dependancies of "whats" and "hows".

The result is the following:

At this picture I described the IBM Global Financing "Business-as-usual" process. As IBM Global Finanicng interacts directly with the customer I used blueprint method of analysis.

Credit department receives the financial documents from the sales organization. Then credit analytic perform the analysis of creditworthiness of the potential customer based on its financials and IBM credit procedures. This check is done on two levels: A/R check and Credit check. After the check the deal should be approved by the relevant level of credit department management based on their clip levels.

As I know there is no throughput rate, work in progress or resource utilization.

The throughput time should be not more than 5 working days for the request.

Normal credit card is a very standardized product. It has predefined size, name font and is created from standard plastic. The process of its production can be characterized as a “Mass process”. This production is performed by the assembly line. This brings high capital costs. But direct labor costs are low due to the high volumes. Most proper Layout type for this process will be Product layout type.

Exclusive gold and diamonds credit card is absolutely opposite product and its production process is different. Here we are talking about very low volumes of production as the jeweler can spend weeks while creating this masterpiece. From the other point of view this brings high variety of the product as different materials and design can be used. The production process can be characterized as a “Project process”. This process involves unique, complex activities. The layout type for this process is “Fixed position layout” as recourses are moved to the product. 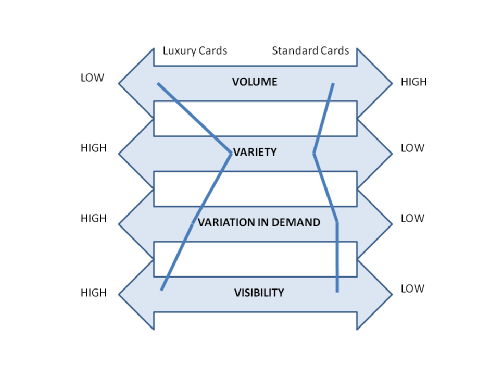