The Beasts of Ancrum Moor

I will continue trying to catch up on my blog soon, when I get some more photos to accompany the calamatous summer fun . But as one set of fun things happen another takes its place so you can understand the difficulty. In there mean time get comfortable, get a cup of tea and check out this story:

This is a true story. As told by Professor McCrimmon, my great uncle for which he won a prize at One World Week's Tales by moonlight on the 22nd of January 07.

Now you may be surprised to see me sitting here in front of the fire trying to put the willies inta you as the shadows dance a jig aboot my craggy face. Ghost stories are for the young you might say. And d’you ken wha? You’d be right. Mine is a fairie story. None of your Disney nonsense. But fairie stories are in m’blood, stories of bloody hard fought battles wi’redcoats are too and all of the monsters that you see out of the corners of your eyes abide in the wrinkles around mine, behind these old glasses.

He was a lot like me when I was young; tall, handsome and he had sharp sight. But I’m getting ahead of m’self, I haven’t even told you his name yet.

Where I come from we have a saying; cometh the hour cometh the man, well this was the hour but he was no man. He belonged to the Bunnock tribe in Jedburgh which is near the east coast of Scotland and he was a fierce warrior. By the turn of the fifteenth century he had killed many a… wait, oh yes, his name was Mungo. Let me tell you, there have always been unjust wars. And there have always been insurgents. And there has always been the Cu Sìth (pronounced 'coo shee'). Obviously this all happened long ago, I don’t know why I’m telling you all this. You probably want to go home and play with your x-plods and i-cubes. You want me to carry on?

A'right but first put down your marshmallows and show due reverence of the dead, because even brave heart lost his head in the struggle. That’s right Mel Gibson, what a man.

T’were Henry the eighth that started it all, but that name didne mean any more to Mungo than any other name that past from the lips of a mother to the birth certificate of her bastard Anglo-Saxon scum, I mean son.

Henry was trying to persuade Mary queen of Scots to marry his son. Although why Edward couldn’t court her himself is a subject for debate, I’m inclined to believe it was due to his lack of a good pair of testicles.

So how did Mr the Eighth try and get our Mary into his son’s empty sack? Did he send her flowers with love poems and sign them “Eddie”? Did he arrange a blind date or a trip to the local bowling ally?

Did he bugger! He sent over five thousand men, including three thousand Spanish and German mercenaries and seven hundred Scottish turncoats to boot. Now you might just understand why we call this the war of the rough wooing. And that’s hard to say if you’re a Scotsman.

Mungo had women problems of his own. There was a lassie in his village called Colina who Mungo had his sharp eyes on. He would tell his cuz’n Dougal how he followed her out one night onto the desolate Ancrum Moor to try and have his way wi’her.

Dougal would eagerly ask; “How was it? Did you touch this, did you see that? How did it feel?” But Mungo would sigh and say “When I got to the top o’Palace Hill she had disappeared, and I was left wi’only the stars for company.”

Colina would tell her cuz Rhona a different story. She too had her sights set on the tall and ruggedly handsome Mungo and would always whistle as she past his door when she went for a late night walk up onto Ancrum Moor, in the hope that he might follow and have his way with her.

Rhona asked the selfsame questions as Dougal; “How was it? Did you touch this, did you see that? How did it feel?” But Colina would sigh and say “When I got to the top of Palace Hill he was no where to be seen, his foot steps stopped only to be replaced by the howling of a dog at the moon.”

On Sunday the Bunnock Tribe congregated on Melrose Abbey, more for the gossip than the religion. As the young and old alike of different tribes settled down to lessons of morals and gods that were not their own, a popular young lad called Jamie burst through the abbey doors.

“What’s the bother Jamie?” Colina asked the out of breath youngster. He gasped a lungful of air and screamed as only those whose lungs aren’t fully grown can: “THE ENGLISH ARE COMING!”

They were at the door. Before the minister or anyone knew what had happened the abbey was destroyed and was serving as an encampment for the English. And not all lives were spared. Dougal and Rhona were caught up in the mealy and slain as the dogs the English thought they were. 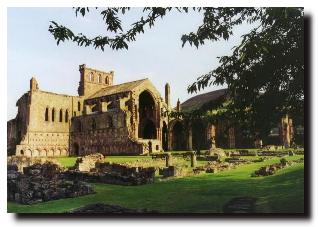 Now here’s the particulars of the story and forgive me if I’ve rushed it but by a curse of fate Colina was a Cu Sìth spirit, I’m sorry to mix my mythology but she was a familiar, a familiar in the Karma game in Jedburgh. Colina is Gaelic for “Young Hound” and funnily enough Mungo is a Gaelic name meaning “My Wolf”. Mungo Too was a fairie hound, a Cu Sìth in the Karma game in Jedburgh. A Cu Sìth, so I’m told, is an enormous dark green beastie roughly the size of a cow or a large calf, with shaggy fur and a long braided tail. And despite their size they hunt silently.

That night Mungo and Colina ran though the dark, tears streaming from their round hound’s eyes and they spied the encampment and the fires at Melrose Abbey. The wind was behind them but it carried not a sound of their approach. The fell upon a tent each mauling as many men as got in their way. Colina had attacked a German tent as she heard their Germanic tongue through her howls of rage. “Achtung! Shnell, Shnell, Shnell oceltoff Schweinhund!”. Mungo in turn fell on the turncoats who knew the fairie hound by his green fur. “Cu Sìth!” they cried “run Cu Sìth!” But the English wouldn’t listen and they charged on the beasts, hang the consequences!

The Cu Sìth ran back outnumbered five thousand to two. Mungo laughed and could see Dougal laughing too in his mind’s eye, as he ran into the wind wi’the taste of blood on his lips and in his nose; Scottish blood, but he could hear the English charging after him and he howled with delight as he reached Palace Hill.

He turned… but Colina was gone. Fallen; their skill of silent huntin was Colina’s curse. She was gone.

And as the English advanced he could take no comfort in the fact that the whole Scottish army stood behind him waiting in ambush. Two and a half thousand men with position, wind and surprise on their side. With the rising sun behind them and the gunpowder smoke blinding the English eyes the Scots won the day, and this war was over shortly after when Henry the eighth died. But since the battle of Ancrum Moor we dunne say cometh the hour cometh the man any longer; we say cometh the hour cometh the beast.

Here I discovered that the real reason Edward couldn’t woo Mary himself was that he was 10 at the time and Mary was just 5 years old!

Here's a link to the website of one of the most inspirational writers of our time Neil Gaiman, to whom I shall dedicate this story along with all of the Bunnocks and the McBeans: