George Bush is a dick–head & the Israeli president recently made it explicit that his attack on Hezbollah and the Lebanese people is really just posturing to Iran and Syria. What a disgusting and obvious admittance of collective punishment.

Israel is asking the US for cluster bombs (possibly the least surgical weapons in military use) and the US is likely to approve the request, but funnily enough the Israeli government will not allow a 3 day humanitarian truce. FUCK THESE ACTIONS!
Phew! That steam wants to be let off but it just aint going to happen soon, not in our totalitarian world regime. Health and Safety is no excuse for DeMenzes’ murder! Mexico’s elections are fixed. Our protests are ignored or censored! Many of those in power should be arrested for war crimes and for glorifying state terrorism. WHAT ABOUT IRAQ?!?! It’s a civil war there! WHAT ABOUT PALESTINE!?!?! Are we just used to this injustice??? Do not paint our fellow human beings, our Muslim friends as fascists George Bush is a fascist and a moron–puppet, Tony Blair is a great public speaker and a fascist, our police are being used as the tools of the fascists. The press is being used to feed the climate and fear. Where is the positive and engaged reporting?

p.s. i feel well sorry for the BBC who get flack from both sides, but they are really towing the party line at the moment. geez

The little voice in your head isn't the voice of God, it just sounds like it thinks it is.

Another pic from the 11th, ganked from Jamie's Facebook. On Tuesday I popped up to Cambridge to hang out with Becky on her day off from working at camp. We had a delightful chillum evening and day, although the weather tried all it could to kill the chillum vibe (being the hottest day of the year). After we farted around looking for our b&b we walked into the town centre and found a lovely Tapas bar to eat, it was delicious as and great to have a beautiful dinner with my girlie, we chatted tons about camp, i felt like the old pro, it was nice nostalgia. We had a nice early breakfast and then we went back into town, we got some water etc and then got straight onto the river Cam for some banterful, sunny punting. I educated Bex all about the episode of Dr Who in which the doc and his companion Romana punted in Cambridge. It was just like that.

We were quite hot and tired (having gotten up early) so we found a shady spot and napped for a while. We then went to a gorgeous pub called the Granta where we had a couple of bevvies and some slap up lunch. It was great to see Bex, we're not very good at being apart, I can't wait for her to finish up camp so we can have tons more fun.
I've been hanging out at home doing admin and reading etc, Me and Arch watched Steamboy which I would review if i thought it would be more positive that it would likely be. In short it has all the spectacle of Akira but with hardly any of the depth or invovement. We also went over to our neighbors which was lovely and we bantered away into the night.
I'm looking forward to a week in La France with family starting Saturday, I love a bit of the beach and the french and their la cuisine.

I've done some campaigning, if you know me you will have recieved this link:

Which we should all sign to say a collective no to the renewal of these useless, evil & expensive weapons. The petition will be handed in to the Prime Minister on Friday 4th August, just before the 61st anniversary of the atomic bombing of Hiroshima so please sign it NOW!

I've also written to Diane Abbot expressing some of my present concerns.

Here is damage from Hezbollah rockets near a hospital. 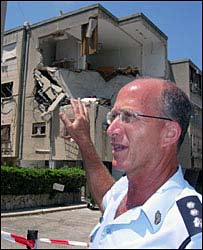 Refugees from Lebanon is in the thousands, their infrastructure bridges, electricity mosques have been levelled. 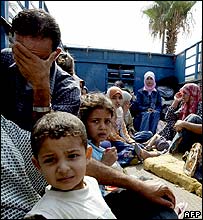 Israel’s military action is called operation "Just Reward", whose? FUCKING WHOSE? No one is going to win this one guys. This is horrendous group punishment of innocent civilised people. And it seems to me it's all very thinly veiled provocation towards Iran and Syria, let's go fuck them unilaterally with our stupid nuked up buddies. I reckon that's why Brown & Blair want to keep Trident, otherwise the US won't play with us anymore cos we won't have as cool toys as Israel or even France.

Bush: "so I vetoed it" well that must make you cream your pants
over the god–like power your veto wields, I guess you gotta keep an eye on the retarded, superstitious, fundamentalist–hick vote. And he's anti same sex marriage. And he's not going to condemn the murder in Lebanon until it's politically convenient. Maybe if he'd been to war he'd see why it's important to condemn this swiftly.
The evacuation reminds me of the scene in shooting dogs, such impending violence, and we're not going to take any notice because there won't be any white guys around to make us care.
I feel most sorry for the Israeli soldiers; they're currently being threatened with a ground war, whoopie! They're going to have a great vacation just like the Coalition's oh so fun ground war in Iraq. But Israel’s soldiers are conscripted! The kidnapped soldiers were forced by their own government to be human excuses for war. Generally soldiers are fair game, it's the job they chose, but here they are forced into now becoming killers, I doubt they're getting any Just Reward or satisfaction from bombing civilians whatever propaganda they're being fed.
I don't expect Hezbolah needs to employ conscription, hatred becomes it's own indoctrination.

Tony Snow is an evil, peddler of spin and lies, he shames all educated articulate westerners into keeping schtum, as does the White House press secretary in Europe the other Tony "blood on his hands" Blair.

3 weeks 100 Palestinians killed. What the Fuck? Many children! Whose crime? Hamas? Well there's a way to boost their recruitment for them, "my friend was killed by Israel before he was 16, they must be the good guys" I think not.

Love to everyone, and infinite thanks for all the abundance abounding

hehe A– Bun – Dance! hehe damn hippies! what will they think of next