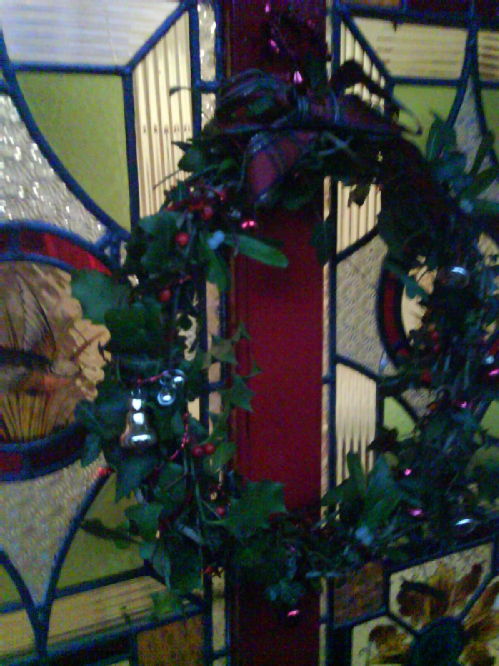 So there it was Merry x-Mas. What a lovely one. This is a wreath I made for the Allen household. I had a really good time going with them to pick a tree, decorate it and drink warm cider. 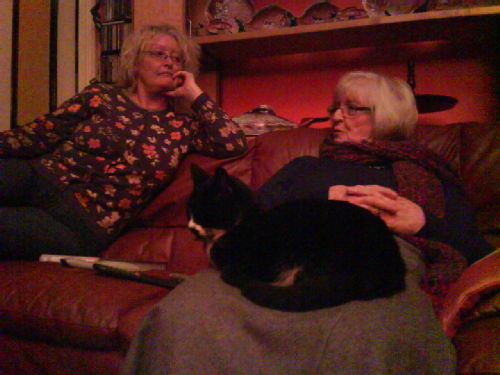 Kina popped over and here you can see her with Ziggy on her lap and Vix by her side. She joined us in Gurnsey, and I joined her for a Catholic mass on Christmas morning. It was nice to see what chrsitians make of the whole thing that they apparently started. But it was a little culty, lots of chanting and all of that stuff. here's Archie, fresh down from Scotland. Great to have him down as ever. I loce christmas trees. They look great from outside and smell great on the inside. Baby Rosh's first x-mas was lovely. She didn't evenmind wearing the crown. She has got a big head. Lotta brains that girl. We went to Gurnsey from the 23rd of December to the 27th. We had all of the Webb cousins, Grandpa and Grandma Cuckoo, Granny Kina, Arch, the rents and myself. We feasted and swam and played lots and lots of games. There were speeches for Grandpa and Grandma's Gold Anniversary on Boxing day, a letter from the Queen and Doctor Who stopping a giant replica of the Titanic crashing into her. Great fun, nice walks, I bought myself a suit and some excellent shoes from an Oxfam for a fiver which have steel toecaps and a map of London on them. Jokes! New years was a fantastic affair, we decided to go to a steam punk party. We went all out, we were even joined by Gaurav. I built some working canvas wings and we all looked like some victorians up for anything, an absinth party or a war with aliens. Even a detour to a squat pub in Clapton. It was a great night, totally mental. We got involved in a round table discussion forum with added helium and had our futures told. A great night to ring in the new year and no doubt. the inevitable March of progress?

so it would seem that my blog has lain dormant for the whole of March. So much for pretty much daily updates!
I think I might try and be a bit topical in my posts if only in the hope I may one day be quoted in the Guardian like a fellow warwick blogger.

But to get ya up tp speed on march fun and frolics since feb 26th:
I took part in the warwick top up fees/lecturer pay protest. I went on to recreate the event in the WTV news studio when i popped in there to pick up a camera for:
I filmed Codpiece's devised play "To the End of the World" which Becky produced and a lot of my thesp buddies were involved in. I got 3 feeds, one was roaming during the rehearsals and one was in the audience and Becky looked after one that was in the gantry which got some excellent busby berkley shots.

There was another cool werl gig in Zippy's on the 2nd of march, although i had been tempted by other cultural event's that evening including; double indemnity at the arts centre and break estra in the union, but i reckon i made a good choice as there was a cool range of music.

I wrote a missions poetry and society essay but i was pretty pleased with the result. And that evening I filmed Battle of the Bands with WTV which was great fun, and a good night of music too. For the last band "The (excellent) Rrrrs" I was on stage, and there's this cool thing of a red light that flicks on when your feed is going live.

I was appointed head of production for features and fiction at WTV which is cool. I've a fair few ideas to kick start our output on that front, such as the filming of devised drama pieces.

We had a drama ball (photo's on facebook but pending here) which was a great masqurade affair. It was top banter, I enjoyed dressing up for it and having an excuse to rock out my lovely silken jacket. The band there were ace too, good drums and sax etc and the food was of a passable standard. It all got a little bit alcohol-fueled messy towards the end but all in all was an excellent night for all methinks.

I went to see a brilliant play with Becky in the arts centre called "Night's at the Circus". It was a magical story (based on an Angela Carter novel) in which a cockney girl with wings is followed by a journalist who becomes a clown in her travelling circus. But the rate of ideas they threw at you left you awash and it was a beautiful and grotesque picture they painted. Top night, and we got some mini tubs of ice cream to round off the night perfectly.

Hit up an L party where Becky and Jen went as lesbians and I rocked out the legolas again, although by the end of the night I'd changed it to eL-f as I was sick of that bloomy bollocks. Ben and Jess both came as perfectly complimentary lifeguards (whistles floatation aids etc) and called spot pool checks randomly, and we were all OK!

I spent some of the end of term chilling, had some great days with Becky and hitting the library hard to get some stuff for the 3 essays I have yet to get fully stuck into.

Becky did some work experience in Chalk Farm so we caught up there one time, had a chilled bevvie in the Worlds end, visited camden church and watched movies at mine apu.

on the weekend 25th/26th did the first proper shooting for SMNS which went great, I loved having all of my favourite warwick actors down and working together. We feasted pretty well thanks to my rents and filmed a whole bunch. In the evening we watched a bit of the Wicker Man which was ace and in the morning filmed a little more and got Penny around to do some great mum death acting. I then headed out to London and filmed on a train a little bit and went with Ben to a pub to meet Becky and then head to a play in the Vaults by a company I'd seen before and LOVED called Shunt. The play was called Amato Saltone or something, and was a great dissection of voyerism etc, based on work by the pulp ficiton writer who inspired Rear Window. There was lots of looking through windows and being controlled in this excellent promenade performance.

I've also got some filming done with my grandrents, with my granny acting a hit and run, and my grandad doing some graveyard grimacing for the title sequence.

It was great to see them and do some catch up, it was also cool spending a day in london with JW, we had a nice leisurely pace. We hit Ed's diner, we popped into forbidden planet to check out doc who merchandice and pick up doc who mag, we went to a science museum exhibition on DIY media that was inspiring although we had missed the most interesting talks, and we found bits of london we'd never been to before.

I went with Becky to Harpenden and had a great time popping into the pub where her mate Alex works and chatting there and we had an excellent dinner to boot. In the evening I pretended to be revising and we watched the Almodovar film Live Flesh.

I got home from this couple of days of debauchary and decided to spend the rest of the day out on my travelcard. I popped into foxy's new place, I then jetted over to camden to see some camp buddies and see Aussie Jaqui off in style, then I went back to Foxy's for a chilled and stimulating evening, bumping into Will and Emilia on the DLR platform. To save cash I night bused it back and met Richard Sayed at the nightbusstop at 3am and had a cool catch up chat.
Sunday was chilled out but productive in the sense that I set up a NO2ID group on facebook and got a good bunch of members.

ok now for something topical…
wait no time I need to eat bathe smash a car windscreen organise another shoot this week and a gathering here. busy busy busy. We'll hit some topical stuff tomorrow or summint