I stumbled on this site the other day: it is a blog run by an american called Leo Emmanuel Lochard, and is full of arrogant pseudo-scientific nonsense. Leo's speech is rich and smooth, but the content is very questionable to say the least, and he updates his blog at a frightening speed. The first article I read (the one I'll go through in this article) is named "Post-Relativity Physics", and is basically an eloquent but weak refutation of the Big Bang Model. Now, I don't mind that people have their own opinions and beliefs, but the way this guy abuses scientifical notions that he clearly does not understand, to reach a far-fetched conclusion on a par with one of de Selby's hypotheses, makes me both frustrated and disgusted.

But before we delve into the blog post in question, let me introduce you to... 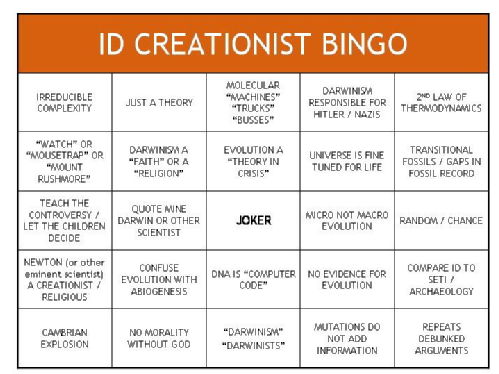 (Note: I have not made and do not own this picture. Credits to Skeptico from Skeptico Blogs)

Despite the fact that Leo is not trying to prove Intelligent Design or disprove Evolution in this post, the Creationist Bingo Board can still be applied to it. Let's have a look at how well he scores...

"One of the "theories" proposed by evolutionists is that the Universe started by itself with a so-called "Big Bang."  Meanwhile, like so-called "missing links," "Big Bang" is yet to be proven as scientifically valid."

Leo doesn't quite confuse Evolution with Abiogenesis, he confuses it with the Big Bang Theory... He deserves a point for that, doesn't he?
He mentions "missing links", i.e. gaps in the fossil record. 2 points.
The last part is another way of saying that the Big Bang model is just a theory. 3 points.
Also note the abundance of quotation marks.

"In the second place, the laws of Thermodynamics which states that "Energy is never created nor destroyed but always transformed," forbid that so-called "past radiation" would continue to "exist" in the present in the absence of a real physical source; Entropy - eventual degradability and decay end-result".

"If we had the technology to ourselves travel into deep space with spaceships and position relays of astronauts with communicators in hand, every two lightyears or so, for example, each would report "by walky-talky" that every light we see comes from a present stellar body that exists in-the-now, and that, the Universe does not have any so-called "epicenter.""

No points here, but this part so full of rubbish that it's worth having a look at.
1. If one somehow managed to show that every light we see comes from a present stellar body that exists in-the-now, that would not say anything about the epicenter of the Universe.
2. The Big Bang model states that the Universe DOESN'T have an epicenter; Leo's got it the wrong way round.
3. To reach those deep space stars Leo is talking about, i.e. the ones millions of light years away, an excessive number of astronauts would be needed to create a living chain between the stars and the astronauts.
4. (This is the worst one) If one were to position a relay of astronauts like our dear Leo proposes, their walky-talky report would NOT reach Earth before the light from the star itself, since radio waves themselves travel no faster than the speed of light. Each astronaut would have to wait two years before receiving the report from their neighbour astronaut. The entire thought experiment is flawed, bizarre, and naïve.

"Theoretical and practical advances in Physics, Chemistry, Biology and Electromagnetism were discovered by scientists who had a firm belief in a monotheistic God, from Newton to Maxwell and Farraday, from Bohr to Einstein who himself proclaimed "God does not play dice with the universe.""

Leo claims that Newton and other scientists were religious. Also, we have a clear case of quote mining Einstein. 7 points.

"In a rational universe, things do not happen by random chance or accident. From the standpoint of theoretical discovery, science, especially Physics, is at a standstill."

Leo doesn't believe random chance can influence our universe. Also, the second statement is tantamount to saying that evolution is a theory in crisis. 9 points.

"I do not believe other nations pose a threat to our scientific predominance in the world, since no scientist has gone past Einstein's Theory of Relativity, in terms of new theoretical discoveries in Physics"

This one made me moan out loud. First, there is no "scientific predominance"; Science isn't a sport in which you hold records. Second, there has been a vast number of theoretical advances in Physics since the appearance of Relativity in the early 20th century, like Quantum Physics and String Theory. Third, Einstein was born German, and had various nationalities throughout his life, including Swiss. To claim he was american is downright arrogant.

"Secondly, the way in which the Sciences are taught must be revisited in order to foster real inquiry rather than "toeing the line" with godless approaches that satisfy the ideological conformity of the "herd"."

Yes, let's teach the controversy. 10 points out of 25, in a debate that doesn't even have anything to do with Intelligent Design. Well done, Leo.

His newly appeared blog is like this in its entirety, a mix of right-wing politics and religious fanaticism, powdered with political incorrectness. He pretends to be a Physics savvy, but his obvious lack of scientific knowledge saddens me. If I ever hear a Christian talking about Einstein's "Uniform Field Theory of Gravity", I'll know what he or she has been reading.

I have disabled comments for this post, because I'd rather not start another internet argument about religion. May all arrogant atheists and believers be annihilated from this planet, so that the more moderate people among us may live peacefully and discuss things that truly matter.