All entries for Sunday 06 September 2009

Imagine a world where computers are dominating society. Not in a frigtening Terminator-end-of-the-world-way, but in a more peaceful, natural way. Humans have developed artificial intelligences so powerful and advanced that they can perform any task a human is capable of, only way faster and much more efficiently. Technology is progressing at a rate faster than ever, so fast indeed that no human is in fact able to keep track. Work in general is done by self-sufficient machines, leaving human beings to indulge themselves in whatever they take pleasure in. A world of leisure, rather than labour.

This in itself isn't an unrealistic scenario. We are getting better at building robots and developing Artificial Intelligence. In the 40's computers were "primitive" objects that few people had heard of or cared about; today most everyone in the Western world owns a PC, and computers are assisting humans in a multitude of tasks. The word "robot" was only invented in 1920, yet the field of robotics is in full bloom and new applications are constantly being found. In the future, it is likely that all trivial tasks within society will be performed by machines. Gradually, through training and self-learning AI, these can be taught to carry out more and more complex tasks. Eventually, we must reach a stage where we can build machines that are superior to humans and can take entirely care of us. The question is just how long it will take us to reach that stage. 1000 years? 500 years? 2000? More? Less?

Ray Kurzweil believes we will have reached this stage... by 2050.

This inventor and futurist is one of the most prominent advocator of what is known as the 'Technological Singularity'. In his article The Law of Accelerating Returns, he argues that technology will is progressing at an exponential rate, meaning that not only is it advancing faster and faster, the rate at which technology advances is itself also increasing faster and faster. This claim is supported by numerous graphs, Moore's Law, and also by the observation that, since computers are helping us advance technologically, faster computers means even faster progress, which in turn increases the computers capacities, and so on and so forth. 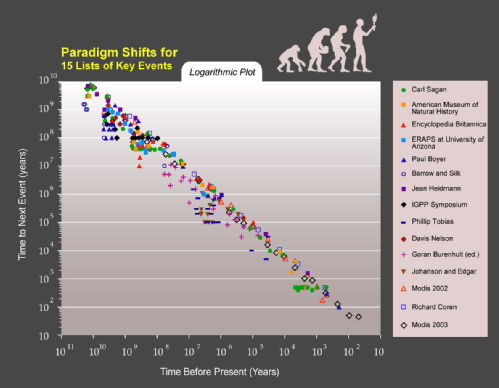 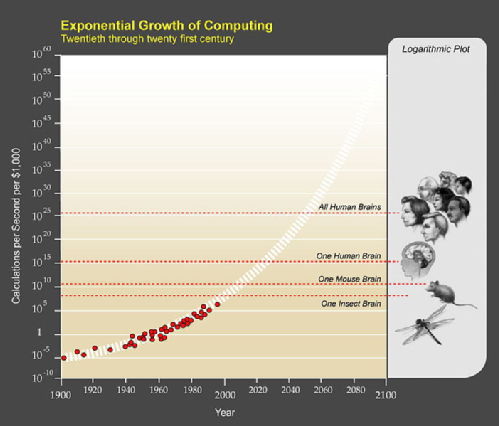 He then proposes the idea that we may soon reach the Singularity, a term which he loosely defines as "technological change so rapid and profound it represents a rupture in the fabric of human history." The reasoning behind it is rather straightforward: Suppose we manage, one day, to build a supercomputer so powerful and intelligent, that it can perform any task a human would be able to, only better and faster. For instance, it will be able to design other supercomputers, even more powerful and sophisticated ones. These in turn will build computers that are even more advanced still. Quickly, we get an explosion of artificial intelligence, way beyond anything humans can fathom. This is the Singularity.

This event will lead to some radical changes in our lives, and we will have to reconsider some deep questions about what it means to be human. To keep up with the technological progress, it will become more and more common to enhance the capacities of certain humans, by genetically engineering their brain or body or by getting artificial machine implants that improve, say, your memory or your vision, thus effectively creating the first cyborgs (is this already happening?). Others will try to achieve eternal life, by gradually replacing every cell in their body by newer, healthier ones (using stem cell technology), or by transferring their brain pattern into an non-aging computer which perfectly emulates the input and output of the human brain. All the while, artificial intelligence wil develop and eventually reach a stage where it has become indistinguishable from humans in every aspect, which is going to raise questions about whether they should be treated as so.

All this may sound quite surreal, but Ray Kurzweil is not just some unimportant lunatic with a quixotical theory. Many academics before and after him have advanced similar scenarios, and a Singularity Institute for Artificial Intelligence has now been created. Movements have also appeared, be it groups that embrace the Singularity and actively work to it about, or goups that have decided to fight the Singularity as they see it as a potentially dangerous, even apocalyptic, idea. However, there's still a lot of scepticism going on, and many are those who claim that it is nothing but wishful thinking, and that computers will never be able to simulate the powers of the human brain. Not to mention that the majority of people have probably never even heard a mention of the Singularity.

Ever since a friend of mine told me about it a few years ago, I have been fascinated by the subject. Whereas I do see the Singularity as something generally positive that is worth looking forward to, I am not entirely convinced that it will definitely happen. Of course, I don't know enough about either artificial intelligence or brain psychology to predict if computers will ever reach a superhuman level, but 2050 just sounds a little early to me. That being said, I sometimes find myself thinking about what a post-singularitarian society would look like, and hoping - even wishing - that I may live to see such a radical change take place on our planet. Lately I have also begun looking at ways to increase life expectancy, since I would hate to miss by only a few years the most mind-numbing and extraordinary milestones of human history.

For those who would like to learn more about this topic, Wikipedia is a good start. There are also a number of blogs out there with Singularity-related news, stories and essays: Singularity Hub, Sentient Developments, Transhuman Goodness. Finally, for those with a more artistic taste, I can recommend the Hob storyline from the Dresden Codak webcomic. Enjoy.