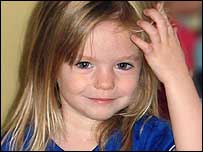 It was in the news today that Robert Murat, the only ‘official suspect’ in the disappearance of Madeleine McCann, has again been visited by the Portuguese police, this time in the company of a British police sniffer dog.

It is one thing to ‘leave no stone unturned’, but I find it somewhat incredible that the same stone is being turned over again and again and again. While it is impossible to know what is on the Portuguese police’s mind, since their law does not allow any details of an investigation to be released, surely if there was any evidence to be found to connect Murat to the offense then it would have been found by now?

While Murat, a single man who owns a computer and lives with his mother and thus a prime suspect for the media profile of the ‘stranger danger’ lurking in even the most innocent appearing bush, this ignores the reality that most victims of violent and / or sexual crime, especially child victims, either know or are related to the offender.

I am in no way pointing the finger at anyone, but from the point of view of investigating a case as important as the disappearance and possible murder of young child, then the parents and their friends should be coming under a careful investigation. So, while Robert Murat’s house is once again searched in what will almost certainly be a pointless exercise, seemingly based on the desperation to be seen to do something and not to give up the only ‘official suspect’ and thus be left with nothing, I wonder how closely the McCann party, friends as well as family, itself has been investigated.