Ok, two cups of tea and several hours later, and I've made it home. I thought I'd give you an illustration of what the Stern-Gerlach apparatus actually looks like: 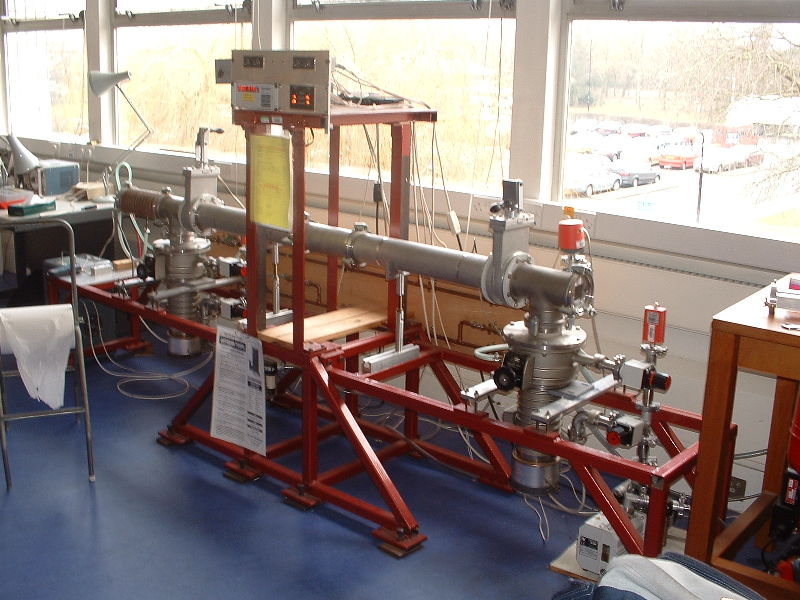 As you can see, it's basically a big long tube of metal. Exciting? Ok, not really. The silver atoms are fired from the left hand side, and the magnets that provide the field gradient are in the middle of the tube, and a slide is at the right hand end to capture the result. The big pumps underneath both ends are to evacuate the tube before you run the experiment. Unfortunately, it takes hours to get a good enough vacuum!

Did I mention that I drink tea? I do. 'Tis very nice…also quite useful for counteracting lack of sleep, I find. Just as well.

Unfortunately, our bathroom at home leaks. This has the irritating consequence of flooding the kitchen. Ok, not very good! Hence the shower and bath are currently out of order, on pain of death (or at least, drowning is a vague possibility). That's why me and James are currently at home, waiting for someone to come round and assess the problem.

They said they'd be here "after 6". Well, it's gone 9:30 now. Somehow I'm not too optimistic. It could be another morning of showering in the sports centre at 08:30! Grr!

In fact, nothing in our house works properly. In no particular order:

Anyway, must get on and do something productive. Don't forget; concert tomorrow. Bring all your friends along :-)

The physics department has an irritating habit of scheduling extra lectures for the 3rd years. Even more annoying is their fixation with the 10:00am slot on a Thursday, which is supposed to be our only free hour from 9 til 6 (well, apart from lunch, which is usually spent discussing the lab!) Such has been the case for the last 4 weeks! Today it was a revision lecture for Solid State Physics I. (Just wait for Solid State Physics II next year – even more exciting!)

Despite this, lab has been very lazy today. Nobody has a deadline coming up, so most of the lab is hanging around blatantly not doing any work. Including us (hence the fact that I'm blogging in the computer room next door). Besides, we've finished the experimental part of the Stern-Gerlach, now we just need to do a computer model and write the report.

Was going to moan about one of my lecture courses, but that can wait until after a cup of tea and my lecture…