You might think that it is quite dull and lonely if you are in a foreign city on your own with nothing to do. But not if you have genes that I have…

I woke up after 9am, showered, and prepared myself for the cold. My stomach was still nicely satisfied from the evening meal, so I thought I would get some brunch while I was out. I had circled all the places on my map that I thought would be worth visiting, such that I could do a walking tour of the city, and then I set off. I walked around the harbour, visited the first of many churches, then down to the president's palace, where I watched the changing of the guard — these guys must be super patient standing around in the freezing weather!

Next I walked up to the Senate Square, one of the main attractions in the city, with the cathedral as the centre piece of the square. Not particularly big for the capital city's most important religious building (I think it is probably smaller than Ely cathedral), but quite an impressive structure which can been seen from all over the city. All the buildings in this area are a similar style and it is very pretty — I especially like the cobble/brick streets, and the trams! In true Japanese tourist style I spent a bit of time taking random photos, quite a few with trams in the background. I wish we had more trams in England. 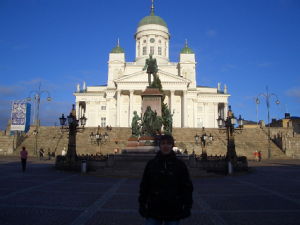 (Do not let the blue sky give you any misconceptions about the air temperature!)

While I was here I got talking to a Mexican guy who became my travel buddy for the day. He was quite a character, and had been travelling around Europe, with quite a few stories to tell — mainly involving the opposite sex. We set off to see some sites together and walked past a couple of art galleries which were closed, and then on to the national musuem. That was also closed, at which point we started to see a trend: they close on Mondays. Still we set off on a long walk to see some other sights, including the Sibelius Monument. 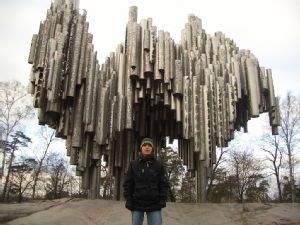 We also went to another church (as they were open!) and visited more of the old part of town. After several hours of walking around we were tired, and, more importantly, freezing! So we headed to the shopping area and found ourselves a nice coffee shop where we could watch the world go by (or should I say: watch the girls go by).

I headed back to my hostel late in the afternoon and spent a bit of time defrosting in preparation for my first meal of the day. A Mexican restaurant had been recommended to me, and so I headed off into the city again to find it. However, on the way I happened to pass a Thai restaurant. The one I had past the previous night didn't look all that Thai, but this one looked quite good and I spied a Thai-looking woman from the window. Before I knew it, my legs had automatically carried me into the restaurant! It was a quiet little place, with three friendly Isahn women running it. I immediately got chatting to them and they were quite interested to hear what a Thai-speaking English guy was doing in Helsinki. I could even hear them nin-tah-ing about me in the kitchen! It was a great meal, and I spent a couple of hours there chatting over a cup of coffee afterwards. As I left I wondered how I always seem to meet Thai people no matter where I go in the world.

Now I am back at the hostel preparing to leave tomorrow morning. I have heard it is not much warmer in England, and given that they don't have saunas, I am not in a rush to get back. I really can't understand why we don't have saunas in England — we definitely need them in winter! Also, the fact that I have now found some great food in Finland proves that I could probably live here after all. Snow and saunas are a great combination — I will be back again!

No more bread and cheese

I arrived in Helsinki, immediately jumped on a tram and easily found the hostel that I had booked. The most important thing next was to eat. I surveyed the plentiful literature on Helsinki that had kindly been left in my room, and I decided that my body could no longer bare pure carbohydrates for sustainance. I identified a number of Chinese/Thai/Asian restaurants in a particular area of town and I set off in that direction. This was a great idea, as I quickly worked where the main areas of the city are, and also how the public transport works. They are almost too organised these Finns. Once I located my target street, I quickly assessed the options and picked the cheapest, most basic looking chinese restaurant. They had a great vegetarian choice (for Finland) and my szechuan tofu and fried rice was ready in no time at all. It was delicious. I think I might have already eaten the last bread and cheese for this trip.