After 18 hours of travelling, I was pleased to arrive in Koli up in the northern Karelia region of Finland, especially as there was a thin layer of snow on the ground. The temperature was well below freezing and my body was just happy to have a shower and go to bed. I was very hungry as the only food I had eaten all day had been on the flight: KLM food, what more can I say? My housemates had advised me to bring instant noodles, but I hadn't, and even if I had there was no kettle in the room — some of you know what I mean!

I woke up early, very hungry, and I was one of the first up for breakfast. I had half expected (and half hoped) that we might have had some special hot continental breakfast. As I think Karl Popper would agree, learning only occurs when something unexpected happens. I have learnt that you should never underestimate the Finnish need for bread and cheese at any time of day. However, I did manage to brew myself a half decent cup of tea — with milk! I also discovered some warm porridge which, when taken with tea, was enough to start my day. I ate breakfast overlooking the trees and lakes surrounding Koli. This is one of the highest places in this region and, on a clear day, you can see trees all the way to the horizon. When I went back to my room and opened my curtains, I discovered that I had a lovely view too. 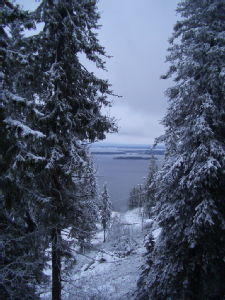 The morning session of the conference passed quickly with some excellent talks, and I was ready once again when lunchtime arrived. I am not really sure what it was that I ate, but it involved mash potato and salad. After my carbohydrate fix, I set off in the cold to walk up to the summit of Koli, just a short walk from the hotel. It was particularly pleasant even with the small amount of snow that was covering the trees. My hands were a bit cold as I didn't bring any gloves, so when I got back to the hotel I had to buy a pair, also at great expense. 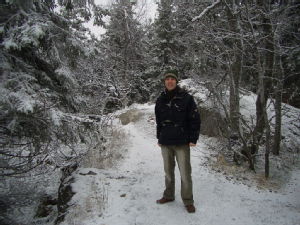 The afternoon session was long, and unfortunately my presentation was the last of the day, by which time everyone was getting quite sleepy. I think a few people were conscious for a few moments of the talk. Anyway, after that it was dinner, which was another feast of carbohydrates for us vegetarians. My main course consisted of potatoes, swede and carrots, with a tiny amount of sauce that appeared to be the leftovers from the mushroom soup we had for starters. Warwick people: I am dreaming about eating rice with you on Tuesday already! 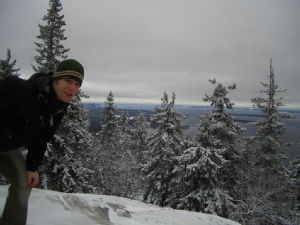 After the meal though, we went to do what Finnish people do best: saunas. I discovered that there are as many saunas in Finland as there are women. I spent an hour moving between the hot sauna and the cool jacuzzi — it was great. Most people were drinking beer, but I was happy just to enjoy this chance to relax. After my body was completely shrivelled I retired to my room for the night.

It was another early start, the same as last time, to begin the journey to Finland. My flight from Birmingham at 6pm, I had to be up before dawn, and the coldest day of the year was there to greet me. How pleasant the views were this time taking-off as the sun was rising on the horizon — the lights of London twinkling as those vacant expression-less city workers haed for the tube.

Sleep reigned over the majority of the journey as little can be recalled of the transfer in Schipol International Airport, except that the flight to Helsinki was delayed. Mental note: I must visit Amsterdam sometime; this is my third passing through Amsterdam without stepping out the airport. Each time I have thought that the Dutch are at least as disorganised as me — it must be the weed.

On arriving in Helsinki I noticed a distinct change in scenery. Two months ago it had been all green with trees but now the leaves are gone on all but the toughest Christmas trees. Winter is setting in. Just looking outside gave me the chills. Although there is no snow, there is an icy look about the trees, the roads, the lakes, and even the people. Once I stepped outside I knew why: one o'clock in the afternoon and the temperature is below freezing. Now where is my hat?

I headed off to the train station, bought my ticket, and then began wandering around as I had done two months ago. I didn't find an adaptor for my laptop (as I forgot to bring one), but I passed the same coffee shop and found the same cute girl working there as last time. I went in and ordered an extortionately-priced, miniscule-sized cappuccino. She didn't remember me. I decided she wasn't that cute after all.

The train to Joensuu departed just before 4pm, by which time it was getting dark. I had made sure I left the coffee shop at the last possible moment to minimise the time spent in the cold. I played it just right, the train arrived minutes after I found the platform. Once again I was on the top deck of a double decker train. It was fairly full, and quite warm which was by far the most important feature. As I sat contemplating the five hour journey ahead, I wondered if the sauna would be open when I finally arrived at the hotel.

After some period of time, I don't know how long as I have learnt to ignore time on long journeys, I gazed out of the window to find a white covering on the ground. It was a pleasant surprise, but unfortunately short-lived, for the next stop had no sign of snow. I hoped that they had some snow in Koli — the location of the conference and one of Finland's most famous national parks. It would be at least another hour on a bus after I arrived at Joensuu. I hoped that the sauna was still open!

To keep me entertained, and warm — the temperature was getting noticeably less comfortable — I took a walk down to the food cart. Not much option, so I ordered a coffee. I didn't have the patience to try my hand at the liquid substance they call 'tea' here. It doesn't have the same qualities as the mighty drink by the same name that powers the British empire. However, warm and refreshed, I returned to my seat and gazed out into the darkness where an expanse of trees lay under the (near) full moon of loykratong.

"I'm a father; that's what matters most. Nothing matters more."