First of all, I have to apologize for not writing for so long time… I am really sorry. The days were passing by and everytime I thought about writing into my blog, I had no time… However, for the rest of November, I did not much besides studying. At the end of November, I visited Silvi in Birmingham, who herself had visitors from Germany, and together we went to church and – to Cadbury's World! Very interesting – and sweet…
Last week, I had two exams. One was quite good, the other not too good… we'll see.
Furthermore, (so far) I enjoyed three Christmas Dinners: One in my bible study group, the second with my mates in the kitchen of our floor (30 people!), and the third with Silvi in Birmingham at a Christmas Dinner of a church.
This week I have been writing on two essays, which I would have liked to complete (but no chance – although I worked all day, I am far from completion…). Tomorrow is my last day on campus, then I'll see Silvi again and together we are going to Dublin and visit a friend from the KHH. And in one week, I'll be (hopefully) at home, at least for a short period of time!
I am still awake now, because of two reasons: 1. Library does not open before 10 on Saturdays and 2. The da.. firealarm of our neighbour-students-dorm is upsetting me and I wouldn't be able to sleep.
Nevertheless, I have to try that now. ;-)

As it is already after midnight: Happy Birthday, Mum!! I wish you the very best and God bless you! I hope you received my card in Paris!

Back again from a nice trip to Cambridge… Silvi and I started on Friday afternoon to get there – unfortunately, it takes about 3h by train, so we arrived in the early evening at my sister Birgit's current studyplace. But getting there on a Friday was definitely worth it, because we could attend the formal dinner of Claire's College (the college of my sister). I think it was the poshest (and probably best) dinner I've had since coming to England. Starting with (free) Sherry, the meal itself went over three delicious courses. It was really great, but I think, I could have eaten double as much… Afterwards, we had a good time in the bar and got to know some of the colleagues of Birgit.
On Saturday, we did a sightseeing tour through Cambridge (with my sister as our guide) and visited most of the ancient colleges there (a few of them you can see in the gallery). We spent the whole day in town and returned after having seen the beautiful fireworks and the bonfire. Afterwards, we were really tired and prepared a dinner at Birgit's flat (which she is sharing with two other guys) and went to bed.
Today, we didn't have much time left, before we returned by train. We slept quite late, attended a service, had lunch and went off to the rail station (in heavy rain…). The journey back to Warwick took long, but everything went well and I am enjoying my Sunday evening, before Week 7 starts…

It's already Tuesday and once again I have not yet wrote a thing about my weekend – you can see that I'm more busy at the moment… However, my last weekend was quite nice. Silvi, her visitors from Germany and I joined a group of Birmingham's City Church to a trip to 'Coughton Court', which is about 18 miles south of Birmingham. For those of you that haven't heard about famous 'Coughton Court': It was the hiding place of the conspirators around Guy Fawkes. And for those of you that haven't heard about Guy Fawkes: He was a disappointed Roman Catholic who wanted to blow the Parliament in the air, in 1605. The reason for his disappointment was that the conditions for Roman Catholics got worse when King James I passed a few laws against them. However, his plan was discovered, he was captured and tortured for four days until he told the names of his conspirators. Today, people commemorate this event on 'Guy Fawkes Night'. Guy Fawkes is quite popular with children – there is a saying:

(Btw: The first line of this little poem also appears at the end of the trailer of "V for Vendetta", which plays in a fictionary fascist Britain.)

Well, we visited 'Coughton Court' (see pictures in the gallery) and got to know a bit about the history. Really interesting!
Afterwards, we had a nice dinner at the house of one of the organisators. Mmmh…
On Sunday, we went to the Jewellery Quarter, most of the Jewellers were closed, but the museum was very good. And after lunch I went back 'home', where we had French Dinner this time! Mmmh again ;-)

Last Saturday, Silvi and I visited Manchester. It took us nearly 2 hours to go there, but it was worth it. Although there aren't many big attractions, we liked the city. Our first image of the city was a good one: There are free buses in the city centre! The weather was also OK, i.e. it was better than the forecast expected it to be… it nearly didn't rain. We went to a nice museum (Urbis), which gave us good impressions about the history and culture of Manchester. Later, we attended a guided "Rock Music Tour" – that was very cool. Our guide knew the music-scene very well and gave us insight into the history of rock music in the city. In the evening, we wanted to take our train back. However, it was not that easy… As there were some 'fans' of Tottenham (which played vs. ManU that day), who apparently did not behave very well, we could not sit in our coach, because the police guided those 'fans' back to London in there and wouldn't let us in ("Oh no, you can't go in there, it's going to be trouble…"). For this reason, we had to ride in the First Class – what a pity… (for pictures of Manchester just visit the gallery)
On Sunday, we attended the service in 'St Martin in the Bullring' – the atmosphere was very welcoming and friendly. Later, we had a good lunch at 'Wagamama', an Asian restaurant chain.

No, in fact, it's not that terrible: Right now the sun is shining into my window and you can see blue sky through the clouds.
I took some nice pictures today in the morning, e.g. this one: I nearly forgot to write about an important event on our floor:
Last Sunday, we had a cool Fiesta Mexicana in our kitchen! Some people had the brilliant idea to prepare delicious mexican food for 20 people and others prepared stylish sombreros. I was in the third category (the ones who enjoyed the evening…). Nevertheless, I had the task to take a group picture… this is the result: 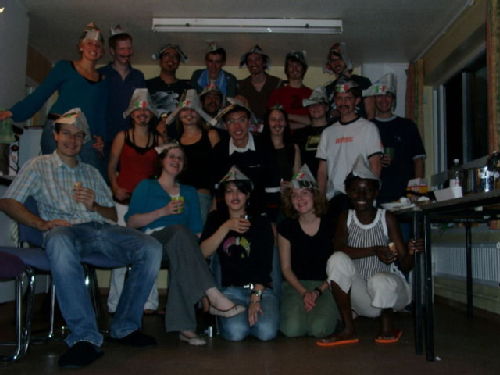 Trip to Canalside and Stratford

Again I am a little late to report about last weekend…
Anyway… Last Saturday, Silvi and I joined a group from the Chaplaincy to a trip to a tour along a nice Canal with lots of locks and to Stratford afterwards. We started at 10am and soon arrived at the canal, where we walked for about one and a half hours. It was amazing, how many locks there were! We saw several boats working their way up and spending at least 5–10mins per lock…
After a nice lunch we went to Stratford, where we spent about 2 hours – we went to Holy Trinity Church, where we saw Shakespeare's tomb and afterwards to his birthplace.
You can see some pictures in my gallery of this nice excursion!

This week has not been very exciting up to now. Besides another firealarm, there is nothing special to note… Therefore, I am looking forward to the next weekend, when I will make a trip to Manchester.

After the comments on my first beer reviews I had intended to test a 'Real Ale', of course. But, unfortunately, the Graduate Bar ran out of these last Saturday (that was at least what they told me…). So, I took the 'Gulpener Korenwolf', not knowing I had chosen a 'witbier' from the Netherlands… However, the taste was quite familiar to the famous 'Neckarmüller Weiße' and I thought immediately it was a good choice.
So, although I might compare apples to bananas, I go on with the test:

The froth is white, the beer itself has the (for wheat beers) typical golden, a bit fishy, colour.

As I mentioned above, the taste reminded me strongly of the 'Neckarmüller Weiße', which means, I really liked it. For those (poor guys), who never had a 'Neckarmüller Weiße': Its aroma is fruity and has a bit of 'nature', i.e. of grass and flowers. And of course the wheat adds a tangy note to it.

Time passes by really fast… the week is nearly over again and I did not even write about my weekend… which was very nice. I was in Birmingham, staying with Silvi. We went shopping on Saturday (I bought a nice Squash racket) and to church on Sunday. Afterwards we were invited for lunch (it took 3 hours and was very good!) and spent the rest of the day in the city.
On Monday, I had a little group presentation in 'Project Management', which was OK. Furthermore, we had the Careers Fair with approx. 50 companies. Quite interesting – I think about applying for a summer internship, we'll see. The whole thing was sponsored by – ALDI!! It seems as if they want to expand strongly here in the UK: everywhere you can find adverts ('37k GBP + Audi A4 + 5 weeks holiday')...
Today was more or less quite boring – I only had one seminar (not easy, though) and spent the rest of the day studying. And in the evening I met some friends and tested the 'Carling'. ;-)

Its colour is golden. The froth is white, although I think it doesn't froth very much or disappears a little bit too fast.

The froth is good, the beer has a likeable, even fruity taste, perhaps a whiff of lemon. Nevertheless, like other malts, the aftertaste is a little bitter.