Writing about A New Beginning from [TBA]

As hinted on Thor’s blog and for those of you I haven’t bumped into recently or seen my Facebook profile.

Rich and I are engaged

For those of you who wondered why it took us so long, you should know the standards I laid out for the proposal.

Rich got full marks in all of these, going to the impressive lengths of proposing on top of a hill overlooking Barcelona, and hence the sea!

Any suggestions for reception venues would be gratefully received!

WiM – Week in March (but was in April)

This review is well overdue – but better late than never!

It was my 3rd WiM, and I think the best one I've been too. I volunteered to be the admin/treasurer person, and because it happened over Easter week and the bank was shut I spent most of the week sleeping with the cash box instead of a cuddly toy, but apart from that:

Going along to a Prayer and Praise arranged by Jamie, Rich and Adair. I didn't really want to go, but decided that it would be rude not to as they had spent a lot of time arranging it and also they needed me to drive the band equipment! Anyhow, after some great worship, I ending up doing my testimony in front of 150 people, then becoming 'holy–spiritised'. So I felt lovesick (for God) for two weeks following WiM – which kept Thor entertained as it meant that I unusually stayed up late to chat to him, had about 4 hours sleep a night and couldn't eat properly, but had to go to work (only my 2nd week in my new job) as a hyperactive spirit–filled Christian, trying my best not to go into a evangelistic rant with my new workmates! 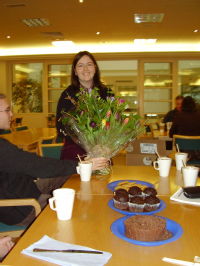 It's only when you don't have something, that you miss it

Grrrr…I have had a silly eye infection, (which I now have eyedrops for) which has meant that I couldn't stand being near a computer (or anything else that involves looking at light) for 3 whole days. The whites of my eyes have turned red, which means that I get strange sympathetic looks from people as it looks like I've been crying incessantly for days.

After getting annoyed at being unable to do anything I planned (essay writing, checking emails, putting WiM applications online) I've spent my time sleeping (makes eyes hurt less) selling Revelation tickets (If you want one, email me, or go to www.warwickrev.org) , choosing new glasses with Rich (for Rich) and being fed up.

I've only been online for about 5 minutes, but my eyes are already stinging so I am having to type with my eyes closed. Going to do something paper-based now…

It would be good if they actually lived on my street

I thought there was just enough space to squeeze my car between the two of them, so I stopped ready to parallel park

put my car in reverse, and hey presto! neighbour stops their car directly behind me, meaning I can't reverse without hitting their car

I don't think they meant to do it, but we live on the bend in the road, so you can't see cars until the last minute

so I drove up the road to find another space…unfortunately, that meant parking outside Learning Grid Rachel's house, leaving no space for Rachel.

My parcels won't turn up

At the moment I am expecting 3 parcels:

The strange thing about the first Amazon parcel is that the courier left a calling card, however, instead of filling in the details they just left a random mobile number on it – which got through to "Sam's voicemail" – very odd!

COME TO OUR CONCERT:

…I mentioned Groupwise that my last entry was automatically tagged ITS?

Revelation: It's not just a choir, it's a way of life

The power of blogs

If it wasn't for Thor's entry on Sunday, I would have told you:

However, what Thor left out was that:

Also, do you ever get the thing where you say something and then realise that you shouldn't have said it?

It happened to me in Next.

I was (yet again) returning a pair of trousers) and she said, "Were there any problems with them?", however, it was cold outside and what she said turned up in my mind's subtitles as, "tboiugwoitb them?" so I repeated it back to her. She, as you would imagine looked at me very strangely and laughed as I tried to dig myself out of the hole with such phrases as, "sorry, - couldn't hear you, my ears are frozen" and "no they didn't fit - they made me look like a pepperpot"…

For any Revvers reading this, Lyrics of the songs we've done so far this term are on the website, as well as photos from our concert last term. If anyone has any more, please email them to me :)

Has anyone been watching 'My Name is Earl?'

Unfortunately, when Groupwise (and H:/ drives) died last week my department (Centre for Lifelong Learning) was one of the last to be restored. Yeah, it was a bit annoying as we couldn't email any students to remind them to come to courses, and couldn't reply to any email queries, but we made the most of our times by planning things, like Skills Certificate courses and Warwick Shootout.

When the problems were fixed, I phoned ITS helpdesk to get a new member of staff access to a forwarding account and, made the mistake of mentioning 'Groupwise' in my query. I could hear (by way of my subtitles ) the guy at the end of the phone cringe and I'm amazed he didn't hang up on me! Anyway - after sorting my query out, I decided to have a chat with him (I've worked on an IT helpdesk - it's horrible and people forget that you have feelings!) so, anyway to cut the story short - paid ITS a few compliments for sorting stuff out when things did go wrong. Come on, who of you would want to go in to clear up the mess caused by someone purposely trying and suceeding in breaking things on a weekend / late at night?!!! I know I wouldn't want to be on the end of a phone to half the people whining on their blogs at the moment!!

So, this time when all the logins messed up, all of our department are having no problems at all.

How do you think?

Apparently I'm quite strange in the way I think – I never thought it was until I mentioned it in a Revelation rehearsal and after it, getting asked lots of questions by the pyschologists in the room, so…

…does anyone see subtitles when people talk? (I can't really say whether the subtitles are a particular colour but they do include punctuation and sometimes have pictures above the words.)

In most of my life it comes in useful. For example, I tend to remember what people say word-for-word and freak people like Jill out when I remember conversations or blog entries from over a year ago, and usually the subtitles rubberstamp over the surroundings of the conversation.

However, and this is where it falls down:

And yes, I do have to watch TV (esp. West Wing) with subtitles, and if I'm reading and someone else is talking, either one gets ignored or subtitles overlay!

So, does anyone think like me, or am I just an oddity?

hmmm….I have a busy day ahead of me!

So far I have managed to wake up, get dressed and carry an amp to my car and proceeded to get it stuck under the parcel shelf and then got myself stuck in the traffic jam between Earlsdon and campus (grrrr – people who want to turn right at the Canley roundabout but go in the middle lane)

I've written a few blog entries over the past few days plugging Skills courses – yes, it is blatant advertising (wait until I start plugging Warwick Rev's concert*) but personally I think the courses are beneficial, even if I didn't do them when I was a student, and unless anyone has got any other ways of letting everyone know…

After work, I've got about half hour for some food before going to a Rev Exec. meeting, Media team meeting and Rev itself, followed by the social and somehow getting enough sleep before I have to come to work again tomorrow :(

Hmmm…and I'm meant to be meeting my supervisor at some point today!