Modern Art - Bringing it down from the inside 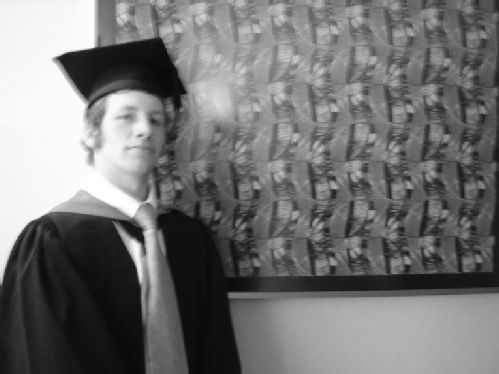 Modern Art in the Maths Department

A number of people have been somewhat surprised by the brutal, and often scathing, honesty of the captions beside a number of pieces of modern artwork in the Maths Department and elsewhere on campus.

The true story is that an enterprising young mathematician spent sizeable portions of his three year degree carefully altering them, and cataloguing his conquest at www.stationcrafts.net/art

His first campaign, in October 2005, involved a few minor changes to the description of 'Everything', Ian Davenport's dripped paint wall in The Street, with the result that visitors can be seen peering through their fingers at arms length searching in vain for an intriguing visual effect.   Since then, a dozen or more captions have been altered, most of them remaining untouched since.

In January 2007, however, he made a blunder - he inadvertently published incriminating footage of himself in the act of replacing a notice, on YouTube.

As a result, he was found out, and got his just desserts on Graduation Day, 16th July 2007, also subsequently published on YouTube.

Finally retiring after three long years, he is now making an appeal for current students to continue the noble work he began.  Do him proud - bring down the world of Modern Art from within.